In 2010 Burnie changed forever. The Pulp Mill, which had been in operation since 1937 and was the heart of the city's industrial base, closed down. Since then it has reinvented itself as a substantial tourist city (it is the largest city on the island's north west coast) with opportunities to see the dusk arrival of the local little penguins; a superb Maker's Workshop where visitors can watch craftspeople at work; an excellent local museum; interesting journeys to waterfalls in the hinterland; and a range of fine dining options featuring the best of the seafood available on the North Coast.

When, in 1842, the town was surveyed and the surrounding land sold to settlers it was named Burnie after William Burnie who, at the time, was the Director of the Van Diemen's Land Company.

Makers Workshop and Visitor Information Centre
Burnie's new Visitor Information Centre, located at 2 Bass Highway at the western end of West Beach, is a delight. It is a memento to the city's historic past and its deep involvement in paper production. The centre offers (a) Paper Making Tours in which visitors can engage in a hands-on demonstration of paper making. The tours occur every 45 minutes from 9.15 am - 4.30 pm. Check out http://www.discoverburnie.net/what-to-see/makers-workshop.html for details and prices. (b) a gift shop where handmade paper products (albums, folios, cards, journals) can be purchased (c) the Makers Studio where craftspeople can be observed as they make their products including hand woven baskets, jewellery, hats, paintings, prints, woodwork, glassware and paper products and (d) there is an excellent cafe. Tel: (03) 6430 5831. It is open seven days from 9.00 am - 5.00 pm

Little Penguin Observation Centre
Located at Parsonage Point (just below the Visitor Information Centre) the Little Penguin Observation Centre is, from September through to March, the hub where, around dusk each evening, the little penguins that have been out searching for food, return to their burrows. All you have to do is stand on the boardwalk (it can get crowded) or go on one of the free guided tours which are run by the Friends of the Burnie Penguins, tel: 0437 436 803 for more details.

Burnie Park
Located over the Bass Highway just a little west of the Visitor Information Centre, Burnie Park with its lawns, shady walkways, and the historic Burnie Inn (the oldest building in the city) is one of the prettiest parks in Tasmania. It is an ideal place for a picnic and has excellent facilities for children.

Burnie Regional Museum
The Burnie Regional Museum is located in Little Alexander Street near the Burnie Regional Art Gallery. The highlight of any visit is Federation Street which is an authentic recreation of shops which would have been commonplace on the north west coast of Tasmania around 1900. The street includes a saddler and boot maker, a blacksmith, a printer, a photographer and even a dentist's surgery with a range of old equipment including a foot operated drill. There is also a cottage sitting room, a kitchen with the usual array of antiquated cooking utensils, an old wash house with a cast iron copper and galvanised iron tubs, a carpenter's shop with examples of the art of joinery as well as good displays of tools, an old butter factory, the Wellington Times Printery, a general store and Post Office. The museum also has demonstrations of spinning, weaving and lace making. For more information tel: (03) 6430 5746 or check out http://www.burnieregionalmuseum.net/. The museum is open from 10.00 am - 4.30 pm weekdays and on the weekends and public holidays from 1.30 pm – 4.00 pm.

The Old Police Station
The city's most elegant building is the building now located next to the Burnie Police Station in Wilson Street. In 1907 this magnificent two storey brick Edwardian house with a huge veranda and magnificent ironwork on both floors was built as a family residence and surgery for a dentist named Mr. Loucadou-Wells.

The Pulp Paper Trail
In 2010 the Burnie Paper Mill closed down. It had been operating since 1937 and the last owners, Paperlinx, gifted to the community and the men and women who had worked in the mill, a 600 metre long trail to recall a time when 'The Pulp' as it was known, dominated the industrial life of the town. The trail is located beside the beach and directly over the road from where the old paper mill once operated. The first sign notes: "Reminiscent of a giant paper reel unrolling the path is a symbolic 'echo' of The Pulp. Imagine for a moment that this path unfolding ahead of you is one long sheet of paper. At the peak of the mill's paper production it would have taken the No. 10 machine about 60 seconds to generate!"

There are a number of signs along the trail which tell the story of the paper mill which, over a period of 72 years, produced high quality paper, high-grade sawn timber, 'Burnie Board' and reams of copy paper. The trail is located beside the Bass Highway on the eastern side of the town.

Guide Falls
Located 16 km south of Burnie at West Ridgley, the Guide Falls are clearly marked beyond the township of Ridgley and are small and delightful. There are two vantage points - one overlooking the falls and another, down some steps, which approaches the falls up the valley. There is a large picnic area at the top.

* Prior to European settlement the Burnie area was home to members of the Tommeginne Aboriginal language group.

* The coast was first explored by Europeans when Bass and Flinders circumnavigated Van Diemen's Land in 1798. They named Round Hill Point and noticed a 'peak like a volcano' near where Burnie now stands.

* On 14 February, 1827 a party from the Van Diemen's Land Company climbed  the 'peak like a volcano' and named it St Valentine's Peak. The party, led by Henry Hellyer, reported that the area was agriculturally rich.

* Emu Bay (as Burnie was originally known) was always a timber port. A sawmill was established near the port. Timber, used for everything from roof shingles to road paving, from house building to ship building, was exported to Melbourne and Adelaide and along the coast to Launceston.

* By 1842 land in the area was being surveyed and sold to settlers. That same year the Burnie Inn was built to cater for the growing population.

* In 1847 Burnie Inn gained its license. It is now the oldest standing building in the city.

* The discovery of tin at Mount Bischoff in 1871 saw the port grow rapidly.

* In 1878 the Van Diemen's Land Company built a tramway from Mount Bischoff to the coast. It was over 75 km long and used horses to haul the carriages laden with tin.

* By the late 1880s the railway was using steam locomotives and the port facilities had been greatly expanded.

* During the 1890s a railway was built through the difficult terrain between Zeehan and Burnie and Burnie became the major port for the shipping silver from the island.

* By 1901 the railway arrived from Launceston. Around this time the town's population was over 1500.

* The construction of the Associated Pulp and Paper Mills in 1937 saw the economy focussed on timber byproducts.

* In 2010 the Paper Mill, at the time owned and operated by Paperlinx, was finally closed.

* Today the city still has an active involvement in the timber trade and has become a major tourist destination.

There is an excellent local website - http://www.discoverburnie.net/ - which is both comprehensive and detailed as far as accommodation and eating are concerned. 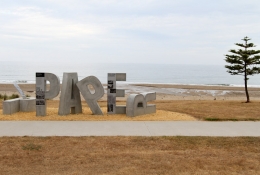 The 600 metre long Pulp Paper Trail runs along the shore of Emu Bay. 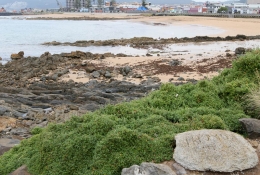 The Little Penguin nests beside the boardwalk at the western end of West Beach. 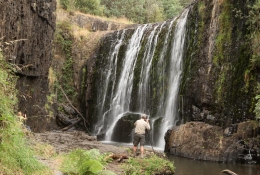 The Guide Falls south of Burnie. 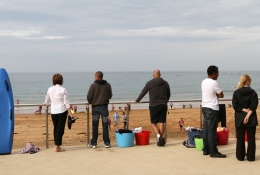 Watching surfers in front of the Surf Lifesaving Club at West Beach. 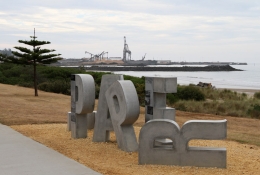 The PAPER sculpture on The Pulp Paper Trail on Emu Bay. 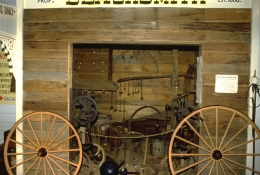 Part of Federation Street in the Burnie Regional Museum. 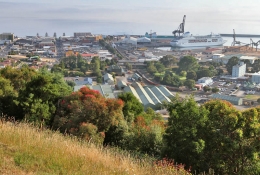 Burnie in the morning light from Wilf Campbell Lookout. 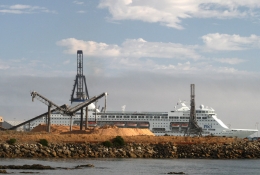 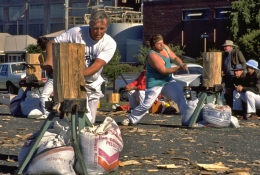 There was a time when timber ruled Burnie. A wood chopping competition in 1992.