If you want to feel the English ambience of the Southern Highlands nowhere quite matches Burrawang. Surrounded by green rolling hills (when there has been rain) with a charming hotel featuring a glorious pub garden, and with a main street edged by trees and full of historic buildings, it looks as though it has been taken from the heart of England and simply dropped in Australia.

Burrawang is located 135 km south-west of Sydney via the Hume Motorway and Bowral.

When the local post office was opened in 1865 it was named Burrawang after the Burrawang palm tree (macrozamia communis) which was common in the area.

Walking Around Burrawang
Burrawang is essentially a timber town. There are a few brick and stone buildings (notably the School of Arts) but most are built of timber.

The General Store (1867), now known as the Burrawang General Store Cafe, in Hoddle Street has been trading (in a variety of guises) continuously for more than 140 years. It has a number of historic signs outside. There is an amusing old sign for the Sydney Morning Herald which has the paper priced at one penny. The cafe is open from 8.00 am - 4.00 pm daily.

The Burrawang Village Hotel is a magnet on weekends. It has an outstanding beer garden, excellent food and an ambience which emulates an attractive and pleasant English village pub.

An even more intensely English ambience pervades Wildes Meadow, a tiny hamlet located 1.5 km south of Burrawang via Church Street. Wildes Meadow was first settled by Daniel Bresnahan, an Irish immigrant, in 1859. It was named after Charles Throsby's servant Joseph Wild, who lived in the area and contributed greatly to the European exploration of the Southern Highlands.

Belmore Falls
Located 6 km from Burrawang via Church Street and Belmore Falls Road are the impressive Belmore Falls. Sections of the road are unsealed but suitable for 2WD vehicles. Parking is at the Hindmarsh Lookout car park and from there it is a short walk to Hindmarsh Lookout from where there are dramatic and panoramic views over Morton National Park and Kangaroo Valley. From Hindmarsh Lookout there is a walking track which follows the cliff line for about 300 metres to a lookout over Belmore Falls. The falls were named after the Earl of Belmore who was the Governor of New South Wales at the time. A road to the falls was built in 1887. The water falls over 100 metres into the Barrengarry Creek Valley which, in turn, joins the Kangaroo Creek which is part of the Shoalhaven River catchment area. This is an ideal place for a bush picnic.

Fitzroy Falls Visitor Centre
Located 12 km via Myra Vale Road the Fitzroy Falls Visitor Centre has extensive information on the local history, wildlife and birdwatching in the area as well as information about the local Aboriginal history. There are also a cafe, picnic and barbecue facilities beside Yarrunga Creek, a delightful creek which tumbles over the escarpment into the Yarrunga Creek Valley. For more information check out http://www.environment.nsw.gov.au/nationalparks/parkVisitorCentre.aspx?id=N0022.

Fitzroy Falls
It has been claimed that the falls were not particularly important to the local Tharawal people. When they were discovered by Charles Throsby they became a popular picnic place. In fact they were so popular that the Governor of New South Wales, Sir Charles Fitzroy, visited in 1850. The falls are where the Yarrunga Creek falls into the Kangaroo Valley and flows into the Kangaroo River. A reserve around the falls was established as early as 1882. The reserve was absorbed into the larger Morton National Park in the 1960s. The flow at the falls has been reduced since the construction of the Fitzroy Falls Reservoir which has dammed  the Yarrunga Creek upstream from the falls since 1974. The reservoir is 5.2 square kilometres in area and has a maximum capacity of 9,950 megalitres.

Both walks start at the Lookout which offers dramatic views of the falls which tumble 82 metres to the valley floor. The view is always impressive. On a clear day it is panoramic and dramatic. On a miserable day it is misty and mysterious.

The East Rim Walking Track "starts at the footbridge on the eastern side of the falls and follows the escarpment to May Lookout (10 minutes) where the visitor can see the lower Grotto Falls and the bottom of the Twin Falls. The track then leaves the escarpment in an easterly direction and gradually winds down to Fern Tree Gully (25 minutes). From Fern Tree Gully the track winds up to Warragong Lookout (40 minutes) where the side view of Fitzroy Falls can be seen. The track then follows the cliff face to Valley View Lookout (70 minutes) where superb views of the top of Twin Falls and the plateau of Mount Carrialoo can be seen. West of Mount Carrialoo is the volcanic extrusion Mount Moollatoo or the Grassy Mountain and the Yarrunga Valley." It is rated as an easy walk. The flora is particularly impressive in spring when the wildflowers are in bloom

The West Rim Walking Track can be done as a very short walk or a longer walk. There is an easy walk of 15 minutes to the Jersey Lookout which offers an excellent view of the falls and the dense rainforest at its base. This is the popular location for photographs. Beyond the Jersey Lookout the track continues to the fire trail before branching to the west to Twin Falls. The lookouts on the eastern side of Twin Falls give some good views of Yarrunga Creek, Twin Falls, and the lower Grotto Falls. On the western side of the stream Paines Lookout allows walkers an excellent close view of Twin Falls. The track then continues to Starkey’s Lookout which provides an excellent view of the Lady Hordern Falls, which cascade 76 metres to the valley floor. Beyond Starkey’s Lookout the track continues on to Renown Lookout where there is a superb view of all the major falls in the upper Yarrunga Creek system. There are numerous guides to the walks on the web. Check out http://www.rabbitte.com.au/TreksandClimbs/tracknotes_fitzroy.htm and http://www.environment.nsw.gov.au/nationalparks/parkWalking.aspx?id=N0022 for more details.

* Prior to European occupation the area around Burrawang was occupied by the Wadi Wadi and Tharawal (Dharawal) Aborigines.

* In 1830 surveyor Robert Hoddle with a gang of convicts cut Hoddles Track (Burrawang's main street is named in his honour) from the escarpment down Saddleback Mountain to Kiama.

* The first land grant in the area was at Wildes Meadow in 1859. John and Elizabeth McGrath walked up the escarpment from Jamberoo when Elizabeth was seven months pregnant.

* In 1865 a post office opened. It was named after the Burrawang Palm. The only access to the outside world was a rough dray path known as the Old Cedar Mountain Road.

* Burrawang was the major township of the Yarrawa Brush from the 1860s until Robertson grew in the 1880s.

* The first school (Anglican) was established in the late 1860s. It was replaced by a public school in 1876.

* The Burrawang and West Camden Farmers' Club was established in 1879 and held its first show at Burrawang in 1880.

* By 1880 a sawmill and flour mill were operating in the district which was driven by dairying and the growing of potatoes and other vegetables.

* The town's newspaper, the Burrawang Herald, was established in 1883.

* In 1889 a School of Arts building was erected. It was the location for the Burrawang and Wilde's Meadow Bachelor's Club balls which were held twice a year.

* Today the village's primary charm is that it has never really developed. It is a time capsule of a 19th century village.

There is a useful local website with information about markets and activities in the village. Check out http://www.burrawangvillage.com/ for more details. 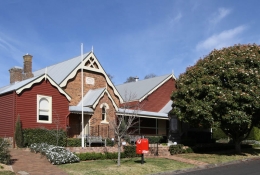 The School of Arts Building in the main street. 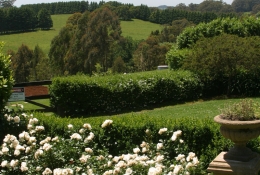 The view across the fields behind the Burrawang Village Hotel. 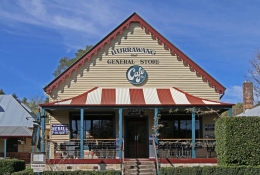 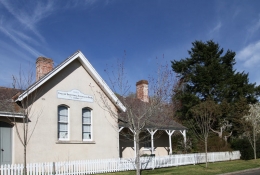 The old English Scottish & Australian Bank (1882) in the main street. 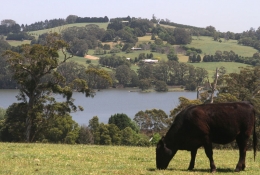 A young Aberdeen Angus grazes beside Fitzroy Lake between Fitzroy Falls and Burrawang. 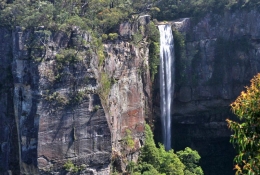 Belmore Falls and the sheer cliffs on either side. 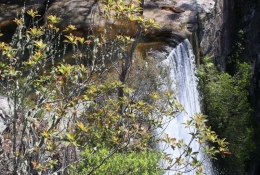 The Barrengarry Creek tumbles over the escarpment as the Belmore Falls. 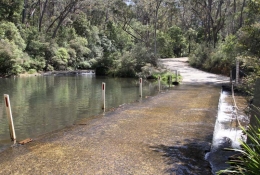 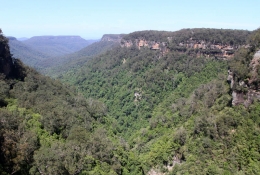 The view from the Fitzroy Lookout down the Yarrunga Valley. 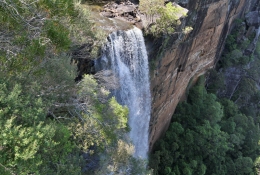 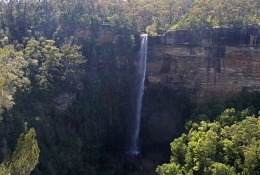 Fitzroy Falls from the Jersey Lookout on the West Rim Track.