Bushy Park describes itself as the hop capital of Tasmania. It is a charming, small village where 19th century houses, deciduous trees and hopfields combine to give it a decidedly English feel. As the visitor arrives they are surrounded by tall hop vine frames in fields where neat, exotically shaped oast houses wait to process the rich harvest.

Bushy Park is located 53 km west of Hobart via Highway 1, the Lyell Highway and the B62.

One of the first Europeans in the area was A.W.H. Humphrey who arrived in 1812 and named the emerging settlement, Humphreyville. Later William Blyth, who had arrived in Hobart in 1835, bought out Humphrey and, some time around 1850, changed the estate's name to Bushy Park after the Blyth family estate near Hampton Court in England.

Text Kiln
The most impressive building in the district is Ebenezer Shoobridge's justifiably famous Text Kiln. It can be reached by driving south towards New Norfolk along Glenora Road from Bushy Park and turning right into 10 Acre Lane. It is at the end of the lane. The 'Text Kiln', as it is known, is an Oast House which was completed in 1867.
Shoobridge, who worked his hopfields with his wife, three sons and five daughters, embraced the idea that 'Union is Strength' and believed that texts from The Bible would be inspiration for his workers. Thus, on the outside walls of the 'Text Kiln' he wrote 'And these words that I command thee this day shall be in thine heart and thy shall write them on the posts of thine house and on thine gate'. In the middle of the building is the sign 'God is Love' and on the far side is 'God so loved the world that he gave his only begotten son that whosoever believeth in him should not perish but have everlasting life'.

Hawthorn Lodge
On the corner of Uxbridge Road and Glenora Road, at 1733 Glenora Road, is Hawthorn Lodge (1869), the home of Ebenezer Shoobridge's son, Robert. It was turned into a guest house but is now a five bedroom, private home characterised by an impressive driveway and gracious gardens which include Canadian Sequoias, oak trees and mulberry, apple, plum, a 120-year-old magnolia and a huge, old cherry tree.

The Water Race
William Shoobridge built a 3 km water race to bring water from the Styx River to drive a huge waterwheel which generated electricity to dry the hops at his Oast House. Some historians believe that Bushy Park had electricity before Hobart.

* Prior to the arrival of European settlers the area around Bushy Park was occupied by the Lairmairrener Aboriginal people.

*In 1812 A.W.H. Humphrey became the first European to settle in the Styx valley. With due modesty he named the early settlement Humphreyville.

* In 1822 William Shoobridge arrived in Van Diemen's Land. He is credited with being the first person to grow hops in Tasmania.

* It wasn't until 1867 that William Shoobridge's son, Ebenezer, settled in the Styx valley and began growing hops. Over the next twenty years he made Bushy Park the largest producer of hops in Australia and, reputedly, in the Southern Hemisphere.

* At its peak the Bushy Park hop industry employed up to 2,600 casual workers to harvest the crop.

* Overproduction of hops became a problem in the 1970s and a number of smaller producers left the area. By 1980 the local producers had amalgamated.

* In 1988 Haas Investments purchased most of the Bushy Park hopfields from Elders IXL and by 1992 they had built a modern harvest complex capable of handling 35-40 tonnes of dry hops per day.

* Today Bushy Park Estates covers 227 ha and yields 660 tonnes of dry hops. Sheep are grazed in the hop growing areas to eat the base growth from the hop plant before harvest.

There is no visitor information centre at Bushy Park.

There are no dedicated websites for Bushy Park. 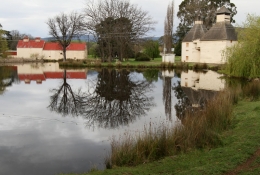 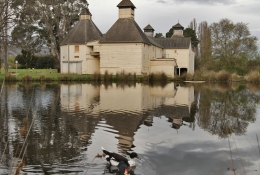 Ducks in the pond in front of the Text Kiln Oasthouse. 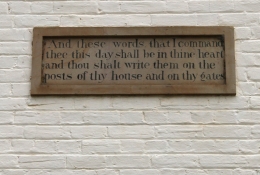 One of the texts on Ebenezer Shoobridge's Oasthouse Text Kiln. 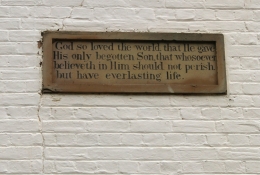 A suitable exhortation to the hop pickers. 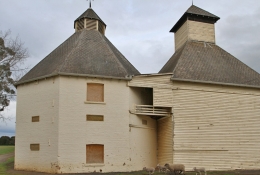 Lambs and a ewe pass by the Text Kiln Oasthouse, now closed. 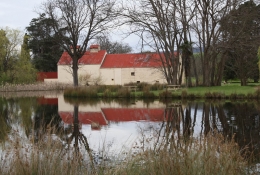 The outbuildings at the Shoobridge farm. 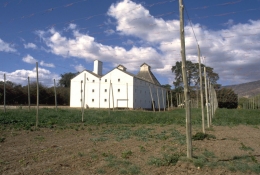 Hopfields and a Shoobridge Oasthouse at Bushy Park in 1992. 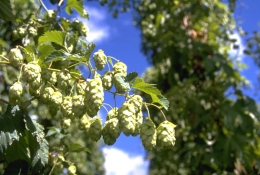 Hops growing in the hopfields at Bushy Park (photo 1992).