Small rural town once known as 'Cornish Village' where William Tom, the first person to discover payable gold in Australia, is buried.

Today Byng is nothing more than an old Wesleyan (now Uniting) Church and a graveyard at the end of a dirt road in the middle of some particularly beautiful, rolling countryside south of Orange. There is one main reason to visit - apart from the obvious beauty of the district and the attractiveness of the sandstone church - and that is the grave of William Tom, the rarely acknowledged, but true, first person to discover payable gold in Australia. He, not the clever and self-publicising Edward Hargraves, was the man who started one of the greatest and most lucrative goldrushes in human history.

Byng is located 246 km north-west of Sydney, 25 km south-east of Orange (18 km from the highway on dirt road) and 44 km west of Bathurst.

Byng was originally named 'Cornish Settlement' because of the large number of Cornish immigrants who settled the area. The town name was changed to Byng. It was renamed after Lieutenant General Sir Julian Byng later Field Marshal Julian Hedworth George Byng who was well known to Australians from his command as a column commander in the Boer War. In World War 1 he commanded the 3rd Cavalry Division in France then the Cavalry Corps. Following the landing at Suvla to help ANZAC Cove, Byng was sent out to command the British IXth Corps in place of Stopford who had failed miserably. He supervised the withdrawal of both IX Corps and the ANZACs from Gallipoli.

Wesleyan Methodist Church
The town's beautiful Wesleyan church dates back to 1873 and is still used today for weddings and other events. It does not hold regular services and all enquiries should be directed to the Uniting Church, Anson Street, Orange, tel: (02) 6362 5788. The church replaced a small rubble building which was constructed in 1842 at Bethel Rock and used by the local Cornish residents. Many of the stones from the original church were used in the construction of the 1873 church which, when it was completed, had a congregation of around 30 people. It was restored as part of a Bicentennial grant in 1988.

Cemetery
The cemetery is located opposite the church and contains the grave (near the road) of Parson William Tom, a Cornish man who was responsible for the first payable gold discovery in Australia. In April, 1851 Tom spotted a 14 gram nugget near the intersection of the Summer Hill Creek and Lewis Ponds Creek. He, his brother James, and John Lister turned their attention to the adjacent creek bed, turning up 113 grams over the next three days, including a 55 gram nugget. They immediately informed Edward Hargraves who took the credit for the find which initiated the first Australian goldrush at Ophir. Such is the unfairness of history.

Springfield
Now a private home and not open to the public, Springfield is a symbol of the Cornish occupation of the area. It was completed in 1854 and was the home of William Tom, a parson in the Wesleyan church and a land owner. It is a two-storey Georgian mansion with thick stone walls, a full length front veranda and an awning supported by white pillars. The house is positioned on a hill overlooking Sheep Station Creek and surrounded by mature gardens planted with European trees and shrubs. A distinctive Cornish touch are the three circular stones set in the front veranda which are inscribed "Caed mile failte" - Gaelic for "One Hundred Thousand Welcomes".

* Before European settlement the area around Byng was inhabited by the Wiradjuri people.

* In 1830 William Tom chose 640 acres in the district and called his property Springfield. The area's Celtic associations are also apparent in the three welcome stones on the porch of 'Springfield' homestead. Custom dictated that the host would stand on the top step, the guest on the bottom, and they would greet each other in the middle.

* In the 1830s, following the lead of William Tom, other Cornishmen moved into the area - families with surnames like Lane, Grenfell, Pearse, Thomas, Oates and Paull settled in the district.

* Bookanan, probably the oldest homestead in the area, was built in 1840 by John Glasson, a descendant of George Hawke.

* Byng was initially known as 'Cornish Settlement' due to the preponderance of Cornish settlers in the earliest days of the settlement.

* In 1841 George Hawke introduced cherries, plums and apples to the area. These fruit trees at the 'Pendarves' estate became the genesis of Orange's fruit industry.

* In 1842 the first Wesleyan Church was built in Byng. It was the first non-conformist church west of the Blue Mountains.

* In 1852 the Government Surveyor submitted a report for the establishment of a reserve in the Parish of Byng.

* In 1854 the village reserve was established and the first allotments were surveyed.

* By 1856 the village is established as a few scattered houses in the valley.

* In 1885 the village was officially proclaimed between Lewis Ponds Creek and Sheep Station Creek.

There is a useful site with a number of photographs. Check out http://www.orange-nsw.com/Byng.html. The Cornish roots in the region are celebrated at http://www.celticcouncil.org.au/cornish/nsw/Towns%20A-C/byngone.htm. 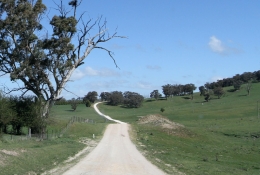 The road to Byng 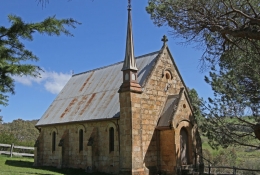 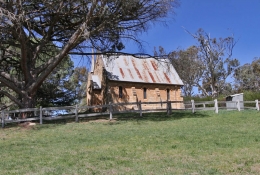 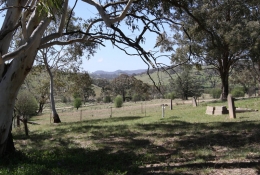 The cemetery over the road from the Byng Wesleyan Church (1872) 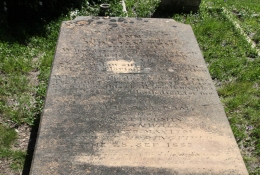 The grave of William Tom, the man who found the first payable gold in Australia.