Roadhouse on the Nullarbor Plain - described by Edward John Eyre as one of the "wildest and most inhospitable wastes of Australia".

Caiguna is a Nullarbor roadhouse with accommodation, a caravan park, a restaurant and service station. It is located at the eastern end of the 146.6 km straight stretch of the Eyre Highway (reputedly the longest straight stretch of road anywhere in the world).

Caiguna is located 1091 km east of Perth via the Great Eastern and Eyre Highways. It is 154 km east of Balladonia and 1,603 km west of Adelaide.

It is claimed that 'caiguna' is a local Mirning word meaning "spear track" which may refer to the speargrass which is extensive in the area.

John Baxter Memorial
Caiguna offers a unique opportunity to reflect upon the remarkable expedition across the Great Australian Bight by Edward John Eyre, John Baxter and three Aborigines. It is writ large in the history of Australian expeditions because it was just south of Caiguna on 29 April, 1841 that two of the Aborigines killed Baxter and, taking most of the party's provisions, fled into the desert.
In Journals of Expeditions of Discovery into Central Australia and overland from Adelaide to King George's Sound in the years 1840-41 Eyre recalled the murder and the problems which followed: "At the dead hour of night, in the wildest and most inhospitable wastes of Australia, with the fierce wind raging in unison with the scene of violence before me, I was left, with a single native, whose fidelity I could not rely upon, and who for aught I knew might be in league with the other two, who perhaps were even now, lurking about with the view of taking away my life as they had done that of the overseer." The remaining Aborigine was named Wylie. He remained with Eyre and they continued until they reached Thistle Cove on 2 June  where they were rescued by a Captain Rossiter, the captain of a French whaler named Mississippi. Eyre honoured Rossiter by naming the bay where he was rescued after the captain. Determined to complete his journey Eyre accepted supplies and he and Wylie continued along the coast to Albany which they reached on 7 July, 1841. It is worth noting that you have to be remarkably tenacious to reach the memorial. It is located 35 km south of Caiguna on a road described as "extremely rough, 4WD only" and the people at the roadhouse said that it can take up to three and a half hours to make the journey.

Caiguna Blowhole
Located 5 km west of Caiguna (it is clearly signposted) these unusual formations are a product of the limestone which is common in the area. They are holes in the limestone which give the appearance of "blowing" when the air pressure differs between the caves underground and the air above the surface. A strange phenomenon. The sign at the blowhole describes the phenomenon: "The blowholes on the Nullarbor have been formed by weathering through to underground cavities. The cave below here has clearance heights of about 0.5-1.5 metres. All caves breathe to some extent. Nullarbor caves breathe more vigorously than caves in any other area of Australia. Air movement at one cave entrance on the Nullarbor has been measured to be about 72km/hr. A cave breathes out when the air pressure falls, and breathes in when it rises. Speed of breathing is related to the cross-sectional area of a cave's entrance (and to the volume of air contained in the cave). Air movement in large cave entrances can be almost impossible to detect.
Caves on the Nullarbor
About 20 or so of the caves on the Nullarbor are of impressively large size, and in some cases have many klometres of spacious passages. A few of the deeper caves contain remarkable lakes and extensive underwater passages. The Nullarbor is the driest karst (limestone) area in the world. If rainfall on the Nullarbor was higher, the limestone would show very much more water weathering, the ground surface would be far less uniform, and would be steep sided valleys as in wet karst areas of the world. Crossing the Nullarbor would be a very different experience.
How dry is the Nullarbor?
Day-time summer temperatures on the Nullarbor can be high (very occasionally as much as 45°C) but there is always a certain amount of relief from the moist winds blowing inland off the ocean. Average rainfall though, is always low, usually around 250 mm/year. Sporadic heavy rains occur about three times a year. (As in other arid regions of the world, the lower the rainfall, the less predictable it is.)

90 Mile Straight
Between Caiguna and Balladonia is the famous "90 Mile Straight". In modern parlance is it 146.6 km and is Australia's longest straight road and one of the longest in the world. The longest is probably in Saudi Arabia where there is a straight road which is 162 miles (260.7 km). Mind you, everything is relative. The railway line across the Nullarbor has a section which is 478 km without a turn.

Nuytsland Nature Reserve
Nuytsland Nature Reserve contains the 190 km long and 80 m high Baxter Cliffs - one of Australia's great scenic features and possibly the longest unbroken cliffs in the world. - See more at: http://parks.dpaw.wa.gov.au/park/nuytsland#sthash.CdQsXfFt.dpuf
The website explains that "The nature reserve is a long coastal strip of land embracing both the high cliffs of the Great Australian Bight and the beaches, dunes and sandplains at Eyre and Israelite Bay ... The scarp and cliffs are the edge of an ancient uplifted seabed. Layers in the cliffs are marine sediments laid down over millions of years when ancient, shallow seas flooded the Eucla Basin ... Access to the western end of the reserve takes you through Cape Arid National Park to Point Malcolm and Israelite Bay. Heath-covered coastal plains that stretch from Israelite Bay inland to Wylie Scarp are interspersed with salt lakes, clay pans and dramatic granite outcrops. Elsewhere in the reserve eucalypt woodlands give way to the bluebush plains that are characteristic of the Nullarbor ... This is a very remote park. Visitors need to be very well prepared, self-contained and fully self-sufficient ... Access to the reserve is four-wheel drive (experienced four-wheel drivers only) and for some locations requires beach driving. Track conditions vary from rough rock pavement to deep sand, overgrown in places and may be impassable when wet."

The Longest Golf Course in the World
Nullarbor Links Golf Course
A very typical Aussie outback joke the Nullarbor Links Golf Course is the world’s longest golf course with the first hole in Ceduna, South Australia and the 18th hole 1365 km away at Kalgoorlie. Check out the details at http://www.nullarborlinks.com. It is real and can be a lot of fun for committed golfers.
Hole 11: 90 Mile Straight Par 4 and is 310 metres.
Located at the Caiguna Motel the 90 Mile Straight hole is relatively uncomplicated. The surface is typical of the Nullarbor with low lying scrub and trees which seem to have been placed as obstacles.

Robbie’s Guide to the Nullarbor Links
A short dog leg par 4 – the safe play from the tee is an iron towards the tree in the middle of the fairway that is 150 metres from the tee. This leaves a second shot to the green that must be hit over the trees, preferably landing just short of the green and bouncing onto the putting surface.
The notes on the website explain: "Caiguna is said to be derived from an aboriginal word meaning "spear track". At the roadhouse begins the most famous stretch of road in Australia, 90 miles of road - not one bend. South of the town is Nuytsland Nature Reserve, a pretty area bounded by sheer cliffs fronting the Southern Ocean. For trivia buffs, the Caiguna Roadhouse was built to assist traffic crossing for the Commonwealth Games in Perth." The tee is called the Edward John Eyre and John Baxter.

* In 1841 Edward John Eyre, accompanied by an Aboriginal named Wylie, passed through the area on his journey across the Nullarbor Plain. It was near Caiguna that Eyre's companion, John Baxter was killed by two Aborigines accompanying the expedition.

* The Caiguna Roadhouse was established in 1962. The aim was to provide basic services for people from the eastern states travelling to Perth for the Commonwealth Games.

* Today Caiguna is a roadhouse providing food, accommodation and fuel to people making the long drive across the Nullarbor. 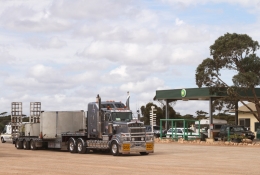 A busy day at the Caiguna Roadhouse. 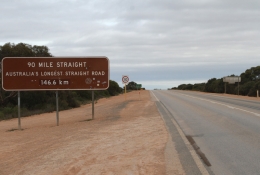 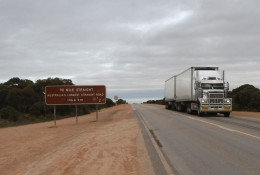 One of the endless parade of trucks which cross the Nullarbor. 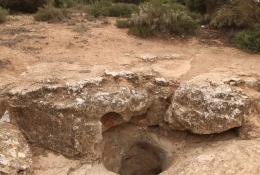 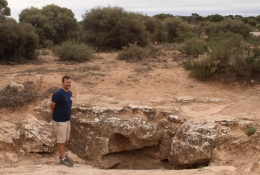 The Caiguna blowhole is a small hole in the ground. 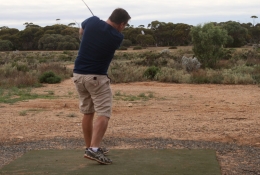 Driving from the tee at the 90 Mile Straight hole behind the roadhouse. 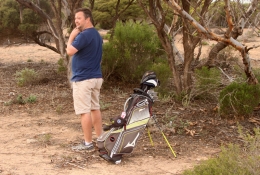 The main obstacles on the hole are the trees halfway down the fairway. 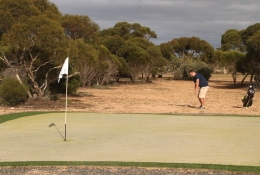 Chipping onto the astroturf green at Caiguna.