Calliope is one of those towns which can easily be missed by travellers roaring up the Bruce Highway. The diversion road - to Calliope to the west and Gladstone to the east - is easy to miss or bypass. The town came into existence as Queensland's first officially proclaimed goldfield in 1863. When the gold was exhausted it went into decline but in recent times, as Gladstone has become a hugely important industrial port, it has experienced a minor boom as a pleasant, commuter belt alternative.

Calliope is located 528 km north of Brisbane via the Bruce and Dawson Highways. It lies 22 km south-west of Gladstone.

In 1854 the town and the local river were named by Governor Charles Augustus FitzRoy after the HMS Calliope. The HMS Calliope was the vessel in which the governor was travelling.

Calliope River Historical Village
The Calliope River Historical Village is located 8 km northwest from the Bruce Highway turnoff to the town of Calliope. It is impossible to miss. Positioned just over the Calliope River, on the western side of the highway, it is a fine collection of early buildings from the local area including the Clyde Hotel, Barmundoo Homestead, Wright's Cottage, the Raglan Dance Hall, Larson House, Curtis House, the Ambrose railway station, Many Peaks Masonic Lodge Hall, the Hazeldean Presbyterian Church, and an historic slab hut. The village is well laid out and it is easy to get a copy of the very detailed description of each of the buildings - here is an example:
"The Slab Hut - This area, about 100 years ago, was an important gold mining district. Hundreds of miners came from many parts of Australia to try their luck. They lived in tents and shanties. At the same time graziers settled here to provide the meat for the miners to eat. As graziers were permanent, they built for themselves houses that would last. This particular house was built in a goldrush area about 70 kilometres from here, right out in the bush. To buy timber or bricks was difficult and very expensive so they made their houses out of split logs smoothed off with an adze. Many had dirt floors, but this one has a slab floor, which keeps beds and tables away from the damp. You can see by the cracks in the floors and walls that in winter time the wind would blow in and they were very cold. Mostly they stuffed these cracks with paper. Some graziers would build their roofs with wooden shingles also split from trees. However, corrugated iron became available about the time this house was built in the late 1890s so it was used instead as it kept the rain out much better. Generally the houses were quite cool in summer and although people didn't have much time to relax they used the deck chairs and would sit in them on the veranda and talk with friends whenever they had time to visit." and make your way around at your leisure. The village is staffed entirely by volunteers and is open daily from 10.00 am - 4.00 pm. It is also home to a regular Country Market on the weekends, tel: (07) 4975 6764. Check out http://callioperiverhistoricalvillage.com for more detailed information.

Lake Awoonga
Lake Awoonga is located 27 km south east from Calliope via the Bruce Highway and Awoonga Road. It is 8 km from the Bruce Highway. Stage 1 of the Awoonga High Dam was opened in 1985 and Stage 2 in 2003. It is the main water supply for the Gladstone region as well as being a hugely popular recreation area known for its lake and mountain views, its outstanding fishing, its popular caravan park and its numerous shelter sheds and barbecues, walking paths and playgrounds.
Enthusiastic anglers come to Lake Awoonga to catch the famed barramundi, of which the sign at one of the lookouts announces that 2,668,350 have been released into the lake. (It is now up to over 4 million) The largest caught weighed in at 36.5 kilograms. As well as barramundi, 469,660 sea mullet, 78,003 yellowfin bream and 70,942 mangrove jack are stocked in the lake. Lake Awoonga is the highest stocked lake in Australia for Mangrove Jack.
It attracts locals and visitors because it is huge and peaceful. It is the ideal place to relax and enjoy the beautiful scenery and wildlife. Plants in the water and river banks support the fish, eels, turtles, platypus and birds. Further from the water's edge snakes, geckos and lizards, frogs and mammals can be found.
The nearby bushland holds a diverse range of native fauna. Bandicoots, melomys, kangaroos, greater gliders and yellow bellied gliders, and brushtail possums. Wallabies such as the agile, whiptail and swamp wallaby can be spotted by keen observers. Two fauna species are listed as vulnerable: the yellow-bellied glider and the grey-headed flying fox.
For "twitchers", Lake Awoonga is a paradise with more than 225 species or over 27% of Australia's bird species found in the region. The southern squatter pigeon is listed as vulnerable and twenty-seven species are listed on International Migratory Conservation Agreement lists. Lake Awoonga is arguably one of the most important near-coast bird refuges on the East Coast of Australia. There is a useful brochure on Lake Awoonga which can be downloaded at http://www.gawb.qld.gov.au/documents/40241572/40255094/Lake_Awoonga_Brochure.pdf.

* Prior to the settlement of Europeans the area around Calliope was occupied by the Gureng Gureng Aboriginal people.

* In 1853 Port Curtis, now known as Gladstone, was surveyed.

* In 1854 Governor Charles Augustus FitzRoy sailed the HMS Calliope up the river and named the river after the vessel.

* It was around this time that settlers moved into the area.

* The town was surveyed and alluvial gold was found in the early 1860s.

* The population had reached 800 by 1864. In that year the local post office opened for business.

* A private school was established in the town in 1868.

* In 1879 the Calliope local division with offices in Gladstone was established.

* The town continued as a service centre for the local beef industry.

* A railway was constructed through the town in 1910 from Port Curtis to Many Peaks.

* In 1968 a second railway from Moura to Gladstone was built. It passed through Calliope.

* A land boom occurred around 2007 with cheap land and the increase in fly in, fly out mining.

* In 2013 the Queensland government tried to sell land in Calliope which had been earmarked for a high school.

There is no visitor centre in Calliope. The closest is the Gladstone Visitor Information Centre, Marina Ferry Terminal, 72 Bryan Jordan Drive, Gladstone, tel: (07) 4972 9000.

The Calliope River Historical Society has its own website. Check out http://callioperiverhistoricalvillage.com. There is a useful brochure on Lake Awoonga which can be downloaded at http://www.gawb.qld.gov.au/documents/40241572/40255094/Lake_Awoonga_Brochure.pdf. 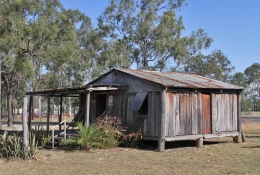 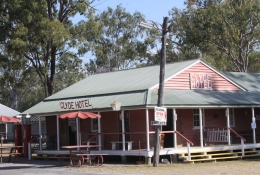 The Clyde Hotel (1870s) rebuilt by the local Vintage Car Club in the 1980s, at Calliope River Historical Village. 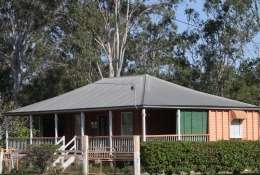 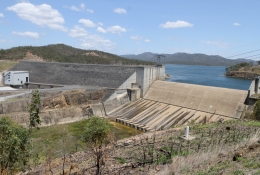 The main wall at Lake Awoonga from the first viewing lookout. 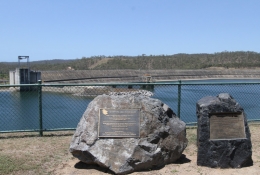