Historic town in the heart of Tasmania.

There are five destinations between Hobart and Launceston which are recognised as being outstanding examples of well-preserved Georgian towns: Richmond, Ross, Oatlands, Evandale and Campbell Town. Unlike the other towns, Campbell Town is notable for its wide main street, its elegant English village green in front of The Grange, its handsome convict-built Red Bridge and the impressive coaching inn, The Foxhunters Return. It is a town best experienced by simply spending time and just mooching - up and down the main street, around the Village Green and beside the Elizabeth River.

Campbell Town is located 67 km south-east of Launceston and 133 km north of Hobart on the Midland Highway.

The town's connections with Governor Lachlan Macquarie and his wife are deep. In 1811, when he travelled from Hobart to Launceston, Macquarie named the river Elizabeth after his wife and in 1821 the garrison town around which the settlement grew, was named Campbell Town after Macquarie's wife maiden name - she had been Elizabeth Campbell.

Exploring Campbell Town
There is a useful brochure - Campbell Town Historic Heart of Tasmania - available at the Visitor Information Centre which lists a total of 42 places of historic interest in and around the town. With over 100 buildings dating from the 19th century, Campbell Town has an excess of historic buildings and deserves to be experienced slowly and deliberately. The best way is to drive down to the park beside the Elizabeth River and slowly walk up the main street admiring and inspecting as you go. Some of the most significant buildings and attractions include:

The Red Bridge
The foundation stone for this three-arch bridge was laid by Lieutenant Governor Arthur on 21 October, 1836. It took convicts fifteen months between 1836-38 to build it. The bricks were all made from clay taken from the south-eastern side of the bridge. It has been estimated that 1.5 million bricks were used in its construction. It was created at a time when only a few horse drawn vehicles crossed it. Today over 2 million vehicles cross it each year.

The Wood Carving History of the Town
Carved from three trees by Eddie Freeman from Ross these unusual sculptures depict the history of the town. The first tree depicts a British soldier guarding a convict labourer during the construction of the Red Bridge. Below is a carving of the bushranger, Martin Cash. Seated near a telescope is Dr William Valentine who viewed the Transit of Venus in Campbell Town in 1874. The aeroplane and globe honour Harold Gatty, the aviator, who circumnavigated the planet in 1931. The sheep and wool acknowledge the fact that the Campbell Town Show is the longest running in the southern hemisphere and the third tree depicts the wildlife found along the Elizabeth River.

The Convict Brick Trail
Along the west side of the main street (the Midland Highway) there is a long, single line of bricks extending along the footpath for a number of blocks. Each of the hundreds and hundreds of bricks records the life of a convict. They are not all convicts who ended up in Van Diemen’s Land. They are bricks recording the lives of every convict that reached Australia and the information was wonderfully succinct … and devastating.

The name of the convict; their age when they arrived in Australia; the ship they were transported on and the year of its arrival; their crime; their sentence; and a small piece of personal information. Thus (and this was the most heart-rending):

By slowly walking the length of the street, and quietly reading each of the bricks, you will learn about the kinds of people who were transported as convicts. Here are lives of great poverty – most of the crimes are a result of starvation or theft of property – recorded in start simplicity. Here are the stories, told with such brevity, of people like Elizabeth Bickford who, at the age of 17 stole some butter and was transported for seven years to Van Diemen’s Land where she met and married  Thomas Myers, aged 19, who had stolen a handkerchief and been transported for seven years. He never returned to England and died in Hobart.

(1) St Luke's Church
At the top (the northern end) of the main street, on the corner of William Street and the High Street, is St Luke's Church which was designed by the notable Colonial Architect, John Lee Archer. The foundation stone was laid in 1835 but, because the building contractor got into financial trouble, a new contractor was employed and the building wasn't completed until 1839.

(5) The Grange
The Grange was designed by the architect, Everard James Blackburn, and built in 1847 in the style of an English manor house. It was the home of Dr William Valentine who was a keen astronomer. He famously hosted a party of Americans from the United States Naval Observatory who witnessed the Transit of Venus in December, 1874.

(6) Campbell Town Inn
On the corner of Queen Street, and currently an antiques shop and art centre, is the gracious Campbell Town Inn which was built in 1840 by Hugh Kean for Gavin Hogg. It is a substantial and elegant building which clearly indicates the importance of Campbell Town as a stopping point at the time.

(8) St Michael's Church
Walk east for a block on King Street and you will reach St Michael's Roman Catholic Church. It was built out of bluestone in 1857 and has 'WW', the initials of Bishop Wilson, the Bishop of Tasmania, carved on the south east wall.

(9) The Foxhunters Return
Dating from 1833 and constructed by convicts The Foxhunters Return, a two-storey rubble stone building, was built by Hugh Kean. It is regarded as one of the "most substantial hotel buildings of the period" and the National Trust describe it as "the finest and most substantial hotel building of the late colonial period in Australia." It is possible to inspect the cellars below the building as they are now used by The Book Cellar and are open from 10.00 am - 4.00 pm daily.

(27) Harold Gatty Memorial
In the small park on the corner of High Street and Pedder Street is the monument to local inventor and navigator, Harold Getty, who, in 1931 with the American aviator Wiley Post, flew around the world in the Winnie Mae in a record breaking 8 days, 15 hours and 51 minutes.

(29) The Old Rectory
On the corner of Bridge and Pedder Streets is the old rectory which was built in 1838. It is a fine example of a Colonial Georgian residence with five bay windows. It was previously known as Solomon's Farm and owned by Lion of Judah Solomon, a local businessman. It was lived in by Dr Valentine prior to the completion of The Grange and in 1888 the Church of England purchased it as a residence for the local clergyman and his family.

* Prior to European settlement the area around Campbell Town was the home to the Tyerrernotepanner Aborigines.

* In 1811, on his journey from Hobart to Launceston, Governor Lachlan Macquarie named the river Elizabeth, after his wife Elizabeth Campbell.

* In 1819 Thomas Kenton, a district constable, became the first European to live in the area. He had a hut beside the Elizabeth River.

* In May, 1821 the site for a garrison towns was chosen by Governor Macquarie who named it after his wife, Elizabeth Campbell.

* In 1822 a bridge was built across the Elizabeth River

* The town site was surveyed by Thomas Scott in 1823. The streets were named Bridge, King, High and East and those names remain today.

* In 1827 the Police Division of Campbell Town was established. A gaol, a Magistrates Court and a Gaoler's House were all constructed.

* In the early 1830s Saxon merino sheep were brought to the district. They formed the nucleus of herds which established Campbell Town as the centre of Van Diemen's Land's fine wool industry.

* 1838 saw the completion of the Red Bridge across the Elizabeth River. That year the Midlands Agricultural Association was formed.

* The town's first sheep show was held in 1839 and has continued until the present day. Locals proudly claim it to be the oldest agricultural show in the British Commonwealth.

* In 1866 Campell Town was declared a municipality.

* In 1874 the first telephone conversation in Australia was made between Campbell Town Railway station and Launceston. The equipment, modelled on designs by Alexander Graham Bell, is now housed in the Queen Victoria Museum in Launceston.

* In 1884 Lake Leake was opened providing Campbell Town with a reliable water source.

* In 2000 the Red Bridge, which had remained unaltered for 162 years, was reinforced with steel pins.

There is an excellent and detailed local website. Check out http://www.campbelltowntasmania.com/ for details about accommodation and eating. 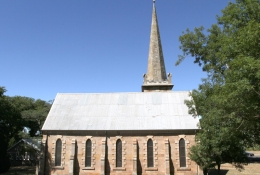 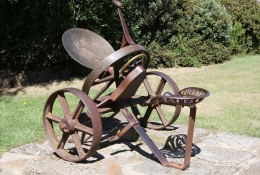 The Transit of Venus sundial. 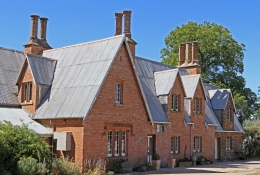 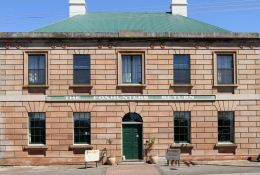 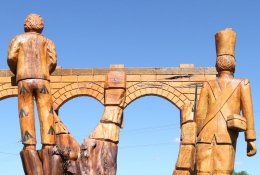 A British soldier and convict labourer carved by Eddie Freeman from a single tree near the Red Bridge.

Eddie Freeman's carving of Dr William Valentine and the Transit of Venus near the Red Bridge. 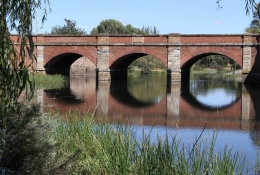 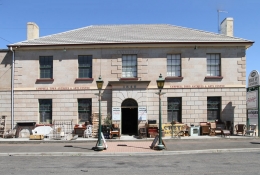 The old Campbell Town Inn (1840) is now an antiques and arts centre. 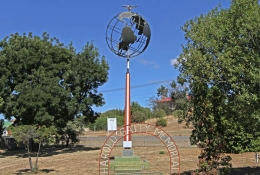 The Harold Gatty Memorial at the northern end of town. 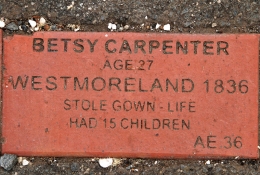 One of the bricks on the town's western footpath 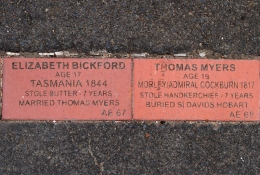 Two bricks recording the history of the convicts 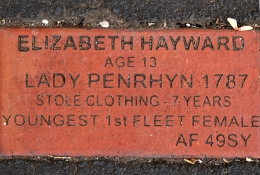 The memorable brick recording the youngest female on the First Fleet