Small town on the Princes Highway which describes itself as "Heart of the Wilderness" - the access to Point Hicks.

Cann River is a stopping point between Eden and Lakes Entrance on the coast road from Sydney to Melbourne. It is also the perfect starting point for people wanting to visit Point Hicks where the European settlement of Australia began. Point Hicks was the first land sighted by the crew of Captain Cook's Endeavour in 1770 and today is a fascinating lighthouse on a wild and rugged coastline.

Cann River is located 594 km south of Sydney and 445 km east of Melbourne on the Princes Highway.

No one is sure what the name means. It may be a GurnaiKurnai First Nations word but no one is sure. What is clear is that the town was, self-evidently, named after the Cann River which runs through it.

Point Hicks and the Point Hicks Lighthouse
While this is a journey that is worth making, it is not an easy one. The distance is 46 km and, because the road is windy and much of it is dirt, it will take about an hour. Then, when you think you have arrived, you have a 2.2 km walk around the coast (it is attractive and easy) to reach the lighthouse and the headland.

This is a place of immense historic importance. It was the first point on the east coast of Australia where Europeans, specifically the British, sighted land and, as such, can be seen as the beginning of modern European society in Australia. At the time Captain James Cook wrote in his journal on the Endeavour: “..With the first daylight this morn the land was seen, it made in sloping hill covered in part with trees and bushes, but interspersed with large tracts of sand…I have named it point Hicks because Lieutenant (Zachariah) Hicks was the first to discover this land.”

There is a simple white monument on the headland with a plaque that reads: "Lieutenant James Cook R.N. of the Endeavour first sighted Australia near this point which he named Point Hicks after Lieutenant Zachary Hicks who first saw the land. April 19th (Ship's Log Date) April 20th (Calendar Date) 1770."

There has been some historical dispute as to whether Zachary Hicks actually saw Point Hicks or whether he saw Ram Head about 20 km further up the coast. Although Cook named the promontory Point Hicks it was changed to Cape Everard in 1865 and did not return to Point Hicks until it was renamed in 1970 during the Bicentenary of Cook's sighting.

Point Hicks Lighthouse
The excellent website Lighthouses of Australia (http://www.lighthouses.org.au/lights/VIC/Point%20Hicks/Point%20Hicks.htm) notes of Point Hicks: "The Point Hicks Lighthouse was built in 1887-88, and was first lit in May 1890. In a break with tradition at the time, the tower was constructed of concrete. The two keeper's quarters were built from timber. The kerosene lamp and clock mechanism were upgraded to electric operation with the connection of mains power in 1965. The light was more recently converted to solar power. The lighthouse is believed to be haunted by the ghost of former Lightkeeper Christofferson. An unusual feature of the light tower is its cast iron spiral staircase, which has 162 steps cantilevered from the walls, rather than the traditional stone steps which are built around a central column. Originally access to Point Hicks was by sea. In 1920 a return trip, by land to Cann River, 47 kilometres away from the light station, took two days. By 1946 the journey had been reduced to 36 hours by a combination of horse and jeep. During the early 1950s it was still a 12-hour ordeal. Today, the journey is possible in 50 minutes but is still treated with respect. The light was known as Cape Everard from 1843 until 1970 when it was changed back to Point Hicks. It seem that there was some doubt as to whether this was Cook's first landfall in Australia, in 1770, because Cook had not taken account of crossing the International Date Line when recording his log. Therefore it was not challenged when the cape was later named Everard. In the lead up to Cook's bi-centenary research was undertaken and the case was presented successfully to restore the rightful name. The area remains largely unchanged from the time it was first sighted back in 1770." The lighthouse is 37 metres high which means it is 56 metres above sea level.

There is a sign at the beginning of the walk to the lighthouse which reads: "Point Hicks lighthouse is open to the public for tours on Friday, Saturday, Sunday and Monday. Throughout the Christmas and Easter school holidays tours are available every day day except Christmas Day and New Year's Day. Access to the light station is from the car park at the end of the road leading through the Tharra River campground: from here it is an easy 2.2 km walk. Children under the age of 12 must be accompanied by an adult. Tours are run at 1.00 pm.  Fees are payable at the beginning of the tour. Tours include: shipwrecks, ghosts, treasure, how it was built, lighthouse families, what the kids got up to, wildlife, weather stations, Wind and solar power and how it works, and anything else you would like to know about?

It is possible to stay in the historic cottages, climb the tower, walk the coastline and to sit on your veranda and watch the seals and whales. The cottages offers a unique holiday experience that combines natural beauty and numerous leisure activities which are available in the Croajingolong National Park. Check out http://pointhicks.com.au/?page_id=30 for more details and bookings of cabins.

Lind National Park
Lind National Paark lies to the west of Cann River. It is a tiny park covering only 1,370 ha. The best experience is the Euchre Valley Nature Drive (a one-way drive through the forest) which passes through wet sclerophyll forest, box ironbark forest, warm temperate rainforest and offers visitors an opportunity to see bloodwoods, lily pillys, clemantis and the unusual East Gippsland waratah which flowers in November and December. See https://www.visitmelbourne.com/regions/Gippsland/Things-to-do/Nature-and-wildlife/National-parks-and-reserves/Lind-National-Park. Unfortunately it was closed due to widespread fire damage in 2019-2020.

Croajingolong National Park
Croajingolong National Park is 88,355 ha with 100 km of undeveloped coastline which runs from Mallacoota Inlet to Bemm River. UNESCO have listed it as a World Biosphere Reserve. It is a outstanding wilderness region which claims to be the home to more than 70 native orchids and wildflower species as well as at least 250 different species of birds. Croajingolong comprises rocky headlands, sandy tidal estuaries, swamp systems, sand dunes, landlocked freshwater lakes, mountains, temperate rainforest valleys, coastal forests and extensive heathlands. These diverse habitats support over 1500 plant species (215 being endemic) and a diverse range of animal life. There are over 306 birds species and 52 mammal species including Eastern Grey kangaroos, possums, wallabies, platypuses, tree goannas, sea eagles, lyrebirds, kingfishers and the rare Ground Parrot.

The park can be reached from Cann River by taking either the Old Coast Road down to Bemm River, the Tamboon Road to Tamboon or the Point Hicks Road to Point Hicks. It is possible to camp at Mueller Inlet (near Point Hicks) where there are both walk in and drive in campsites, Thurra River (an hour’s drive from Cann River on a narrow, winding and unsealed road) and Peachtree Creek. The park was seriously damaged by the 2019-2020 bushfires. Some sections are open. Check out https://www.visitvictoria.com/regions/Gippsland/Things-to-do/Nature-and-wildlife/National-parks-and-reserves/Croajingolong-National-Park for more details.

Bemm River
On the Princes Highway between Cann River and Orbost (40 km west of Cann River) is the turnoff to Bemm River. It is a tiny settlement situated on the Sydenham Inlet which attracts anglers. It is known as an excellent bream fishing area with some anglers insisting it is the Bream Capital of Australia.

* Prior to the arrival of Europeans the area was the home of the Kurnai and Bidawal First Nations people.

* On 20 April, 1770 Point Hicks was named by Captain James Cook’s to honour his senior lieutenant, Zachary Hicks, who became the first European to site the east coast of Australia.

* By the early 1840s cattle from Twofold Bay was being grazed in the area but it was too far from the home station and the local Bidawal Aborigines speared and ate the animals.

* Around 1879 the Morgan family took up the Cann River station.

* The Cann River post office opened in 1890 on the property of the Morgan family.

* By 1900 a small settlement comprising a store, school, church and hall had developed 9 km from the present town.

* There were 163 people living in the district by 1921. Most residents had small farms with pigs, dairy and beef cattle.

* In 1928 a large, brick hotel was built on the town's present site and the Princes Highway was re-routed to pass beside it. That same year St John's Anglican Church was constructed.

* In 1965 a secondary school was established in the town.

* The district was connected to the state electricity grid in 1970.

* By 1977 there were five sawmills in the district and timber was an important local industry.

* Today the town is an important stopover on the Princes Highway. It has a hotel, three motels and a number of eateries. 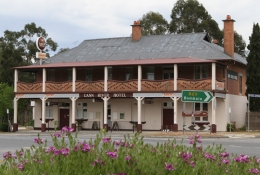 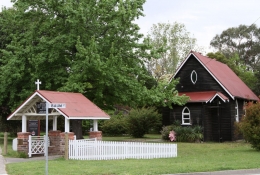 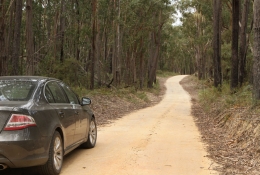 The road from Cann River to Point Hicks. 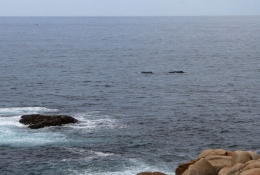 Whales off the coast at Point Hicks. 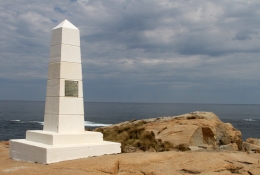 The monument to Zachary Hicks at Point Hicks. 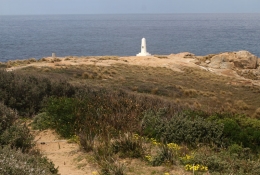 The track down to the monument on Point Hicks. 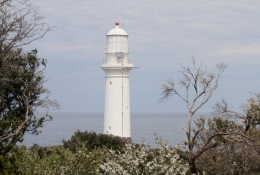 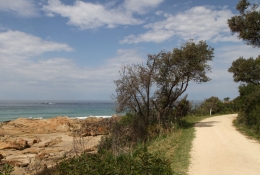 The track from the car park around to Point Hicks lighthouse. 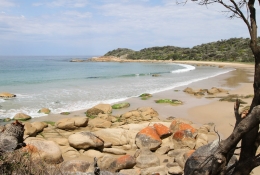 Honeymoon Bay on the northern side of Point Hicks.