Mainland ferry terminal and gateway for travellers to Kangaroo Island.

Cape Jervis has a petrol station, a general store, a small community, a lighthouse and a wind farm but, primarily, it is the terminal for the main car and passenger ferry across to Kangaroo Island. Positioned at the very south-western tip of the Fleurieu Peninsula it has a view across the Backstairs Passage to the coast of Kangaroo Island. Today the tiny town is a fishing destination and a place where people gather to catch the ferry although it is true that there are a number of parks, which offer bush and coastal walks, in the area.

Cape Jervis is located 107 km south of Adelaide on the southern tip of the Fleurieu Peninsula.

When Matthew Flinders circumnavigated Australia in 1802 he passed between Kangaroo Island (which he had named), through Backstairs Passage (which he also named), and named the cape on the mainland, Cape Jervis after John Jervis, the First Lord of the British Admiralty.

Cape Jervis Lighthouse
The current, and very modern, lighthouse dates from 1972. This was a century after the first lighthouse on the cape which was lit on 10 August, 1871. The current light has a range of 18 nautical miles and is located on a headland known as Lands End. It is located 22 metres above sea level. The foundation of the original 1871 lighthouse is still visible in front of the current concrete building. The design is an inverted pyramid.

Cape Jervis Ferry
The passenger and vehicular ferry at Cape Jervis crosses to Kangaroo Island every hour between 9.00 am - 7.00 pm in the summer months and once every three hours in the winter months. Check out https://www.sealink.com.au/kangaroo-island-ferry/timetables for details.

Deep Creek Conservation Park
To the east of Cape Jervis, and located 120 km south of Adelaide and 8 km south of Delamere, is Deep Creek Conservation Park, described by National Parks South Australia as "the largest remaining block of wildlife habitat on the Fleurieu Peninsula and home to an array of native wildlife. Look out for western grey kangaroos, short-beaked echidnas or some of the 100 bird species that can easily be heard or spotted when walking in the park. The walking trails also provide spectacular scenery of the Backstairs Passage, Kangaroo Island and the rugged Deep Creek valley." There is detailed information about this 4,030 hectare park at http://www.environment.sa.gov.au/parks/Find_a_Park/Browse_by_region/Fleurieu_Peninsula/Deep_Creek_Conservation_Park.

The Heysen Trail
The Heysen Trail is a 1,200 km walking track from Cape Jervis to the Flinders Ranges essentially along the Mount Lofty Ranges. It was opened progressively from 1976-1993. The website run by the Friends of Heysen notes of the first section - a 14 km walk - "From the Cape Jervis trailhead, this section follows sandy coastal tracks and exposed coastal hillsides, providing spectacular views over Backstairs Passage to Kangaroo Island. Walkers are often rewarded with sightings of seals and dolphins. At Blowhole Beach the trail enters Deep Creek Conservation Park to begin the long climb through native bushland to Cobbler Hill." Check out http://heysentrail.asn.au/heysen-trail/sections/cape-jervis-to-cobbler-hill for more details and a Google map of the route.

Rapid Bay
Located 17 km north of Cape Jervis, Rapid Bay is an impressive stretch of coastline characterised by a pebbly beach, a jetty, a limestone quarry and rocky headlands. There are pleasant walks along the cliffs and the waters in the bay are good for both fishing and skin diving. The area offers squid, tommy ruff, yellowtail kingfish, red mullet, sea mullet, whiting, barracouta, salmon and garfish, amongst others. The nearby Second Valley Jetty is also good for tommy ruff, garfish and squid.

* Prior to the arrival of Europeans the area around Cape Jervis was occupied by the Kaurna Aboriginal people.

* In 1802 Matthew Flinders, during his circumnavigation of Australia in the Investigator, named the strait between the island and the mainland declaring "It forms a private entrance, as it were, to the two gulphs; and I named it Backstairs Passage." He named Cape Jervis after John Jervis, the First Lord of the British Admiralty.

* In 1972 a new, concrete, inverted pyramid lighthouse was installed.

* In the 1970s a regular ferry service to Kangaroo Island from Cape Jervis was established.

* Kangaroo Island SeaLink was established in 1989.

There is a good site for the region. Check out http://www.yankalilla.sa.gov.au/page.aspx?u=505. 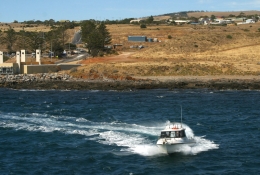 The ferry terminal and tiny town of Cape Jervis. 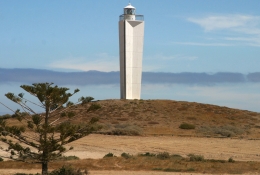 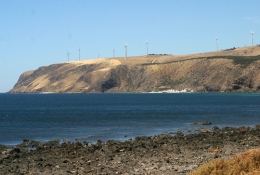 Cape Jervis and the wind farm from the jetty. 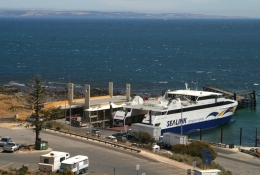 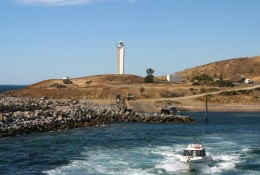 The Cape Jervis Lighthouse from the Sealink ferry to Kangaroo island.