Cape Otway and the Cape Otway National Park are one of the most scenic sections of rugged coastline which is traversed by the Great Ocean Road. The appeal of Cape Otway is simple: the lightstation is the oldest surviving lighthouse on mainland Australia; the headland is the southernmost point on south-western Victoria; the views are panoramic and the Great Southern Ocean has a special magic; and there are excellent short and long walks which traverse this coastline with the Great Ocean Walk being the most appealing and testing. Give yourself some hours to enjoy Cape Otway. It has a cafe, an interesting Aboriginal cultural site and a museum in the Telegraph Station. Also, as a bonus, the possibility of seeing koalas and whales is high.

Cape Otway and the Otway Ranges were named after Captain Albany Otway by his friend Lieutenant James Grant.

Maits Rest Rainforest Walk
Located 16 km east of Apollo Bay and 15 km north of Cape Otway is a delightful, must-do 30-minute stroll through fern gullies and eucalypts on a raised boardwalk to a viewing platform beneath a 300-year-old myrtle beech which is on the National Trust register. The myrtle beech is an unusual growth combining two or three trees in one. The route is wheelchair accessible. This really is a special walk which offers a particularly enjoyable rainforest experience and a sharp contrast to the rugged beauty of Cape Otway.

Cape Otway Lighthouse Station & Shipwreck Discovery Tours
Located 31 km from Apollo Bay (follow the Great Ocean Road west and the road to the lighthouse is clearly signposted), Cape Otway lighthouse "was the oldest operational lighthouse with unbroken service on the mainland Australian coast until it was decommissioned in January 1994". It stands 91 metres above sea level, can be seen 26 nautical miles out to sea and is 20 metres high. Interestingly the replacement - a very modest solar-powered automatic beacon - stands below the lighthouse and can be seen clearly for all those who make the ascent to the top of the buildings. The ascent is very easy with a wide stairway until the last, more narrow, climb.
It was a vital addition to nautical safety because ships attempting to pass through Bass Strait between King Island and Cape Otway tended to keep very close to the Victorian coastline in case they were blown onto the rocks at King Island. The narrow passageway became known as "The Eye of the Needle". The lighthouse was a response to public demand after two major shipwrecks in the area had resulted in the loss of over 600 lives. The worst was the wreck of the Cataraqui which headed south attempting to avoid the Cape Otway rocks but was wrecked on King Island. This resulted in the death of some 406 people.
The biggest problem in building the lighthouse was access. There were three attempts before Cape Otway was reached by land. When it was constructed supplies were delivered every six months. The track that was eventually cut to Colac was not accessible to motor vehicles until the 1930s.
Construction of the lighthouse began in 1846 and it was completed in 1848 to a design by the Colonial Architect Mortimer Lewis. The stone used in the construction was quarried at Parker River which is 5 km away. The light was decommissioned in 1994. At that time it was the longest continuously operating lighthouse on the Australian mainland. The best overview of the lighthouse can be found at http://www.lighthouses.org.au/lights/VIC/Cape%20Otway/Cape%20Otway.htm.
While access to the lighthouse grounds is not cheap, there is plenty to see once the visitor enters the grounds. A loop track includes:

The Telegraph Station (1859) - which has a comprehensive history of the building, a photograph of the elegant original building which had a tower which was demolished in 1909, an interesting account of the building's function as a telegraph station (the cable was the longest underwater cable at the time) and a look at the people who manned the lighthouse and the station.

The Head Lightkeeper's House (1857) - was built of green sandstone from a nearby quarry. Today it can be rented and has open fireplaces and four double bedrooms.

The Assistant Lightkeeper's Residence and Cafe (1858) - which was originally built to house two assistant light keepers and their families. Today it has a cafe.

Caring for Culture and Country - There is an interesting Aboriginal Cultural Site at the western end of the grounds. It has a number of interesting artefacts  and is usually used for groups but it is certainly worth visiting for those interested in the indigenous history of the area.
There are marked walking tracks from the lighthouse. A short, easy, 30-minute return walk to the cemetery and there is a longer, easy walk to Rainbow Falls (about two hours return).
The Cape Otway Lightstation is open from 9.00 am - 5.00 pm daily and the Shipwreck Discovery Tours run at 10.00 am, noon, 2.00 pm and 4.00 pm. Tel: (03) 5237 9240 or check out http://www.lightstation.com/.
The Shipwreck Discovery Tour is a guided tour of the Cape which includes a visit to Parker River inlet, Blanket Bay (where the ruins of a storage shed still stand), the possibility of seeing the wreck of Eric the Red at low tide, a climb to the top of the Lighthouse and visits to the Telegraph Station and World War II Radar Bunker.

Great Ocean Walk
The Great Ocean Walk is an eight day, one way long distance walk from the Apollo Bay Visitor Information Centre through the Great Otway and Port Campbell National Parks. The journey finishes at Princetown near the Twelve Apostles. There is an excellent website - http://www.visitgreatoceanroad.org.au/ - which points out that while you may not be planning to have the eight day experience there is a suitably short series of walks at the beginning which will give you a worthwhile experience. The distance from Apollo Bay to Cape Otway is 32.5 km and is an easy/medium walk which should take around 11 hours 45 minutes. In other words, it can't be done in a day. The first section from Apollo Bay to the Elliot Ridge campsite is 10 km and will take around 3 and a half hours; from Elliot Ridge to Blanket Bay is 12 km and takes around 4 and a half hours; and Blanket Bay campsite to Cape Otway is 10.5 km (3 hours 45 minutes). There are detailed maps and good information available at Great Ocean Road Visitor Information Centre, 100 Great Ocean Road, tel: 1300 689 297. Remember: you can only travel in one way.

* Prior to the arrival of Europeans, the Cape Otway area was inhabited by Ganubadud Aborigines who lived largely on fish and crustaceans. Evidence of their existence in the area has been found. There are ancient middens on the Otway Peninsula near the Aire River.

* The area was sighted in 1800 when Lieutenant James Grant sailed through Bass Strait in the Lady Nelson. He named the ranges after his friend Captain Albany Otway.

* Matthew Flinders traversed the coastline in 1802 and noted the "fierceness" of the cliffs.

* By 1847 the Henty brothers had established a whaling station at Point Bunbury which is where the Apollo Bay now stands.

* In 1850 timber cutters moved into the district.

* By 1851 Roadknight had cut a road from his property to the coast near Cape Otway.

* In 1859 Australia's first submarine cable was laid between Cape Otway and Launceston.

* By 1870 timber and cattle were the important local industries.

* In 1940 a US ship, the City of Rayville, was sunk by a German mine off the Cape. It was the first casualty for the Americans during World War II.

* Today Cape Otway is a National Park and the Cape Otway lighthouse has some of the finest views on the south coast.

The best overview of the lighthouse on the internet can be accessed at http://www.lightstation.com/. There is an excellent guide book on the entire coast. Check out http://www.rodneyhyett.com.au/great-ocean-road-guide-book.html for details. 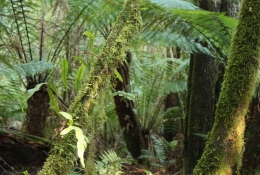 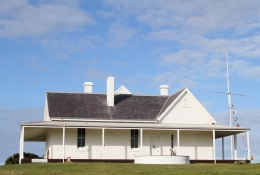 The Telegraph Station (1859) at Cape Otway, now a museum telling the story of the families who manned the lighthouse and the history of the telegraph station. 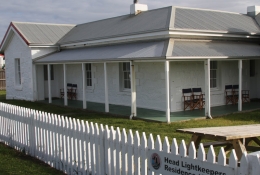 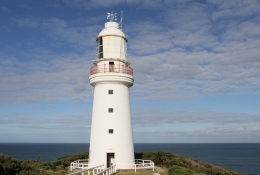 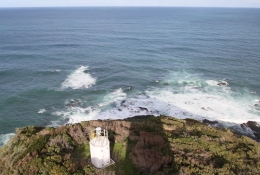 The irony of the lighthouse - the shadow of the 1848 lighthouse looms over the small, modern solar-powered automatic beacon which has replaced it. 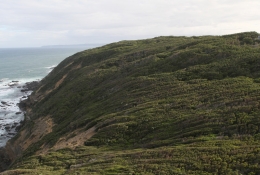 The winds are so relentless that the vegetation looks as though it has been raked - all in one direction. Photo looking west from the top of the lighthouse. 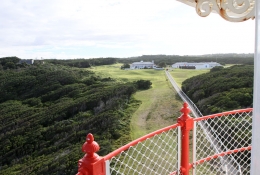 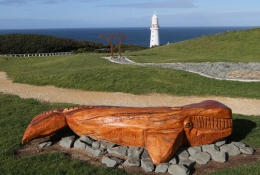 The Whale Interpretative Area with both a timber sculpture and a huge life size model made from stones. 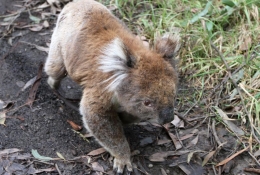 Blinky Bill heads for the Eucalyptus B&B. A rare sight at Cape Otway. 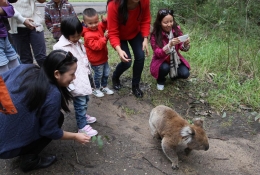 It is common to see koalas at Cape Otway. Here some Chinese tourists get lucky as Blinky Bill moves from one tree to another.