Historic site in Daintree Rainforest where Captain Cook ran aground on the Great Barrier Reef.

Cape Tribulation is one of the iconic places in Australia's European history. It was here that Captain James Cook, who had successfully navigated the H.M. Barque Endeavour through the treacherous waters of the Great Barrier Reef, was finally beaten by the reef. The vessel ran aground, limped its way to Cooktown, and was there for a number of weeks while repairs were made. It was the first time Europeans had settled, albeit briefly, on the east coast of the continent. Today Cape Tribulation is a popular destination for tourists making a northerly day trip from Cairns and Port Douglas. It is an opportunity to enter the tropical wonderland that is the Daintree National Forest. For the more adventurous it is the beginning of one of the most outrageous journeys on the planet - a road which should never have been built - which runs from Daintree to Cooktown. Why, never built? Because this is cyclone country and every year when the rains come they wash the red and yellow soils into the once-pristine waters. Still, for all its failings, the road is spectacular and the experience of driving through the rainforest is unforgettable. Equally unforgettable is a stay at Bloomfield Lodge, a remarkable and exclusive resort in the rainforest with superb views across the Coral Sea.

Cape Tribulation is located 1849 km north of Brisbane via the National Highway and 140 km north of Cairns via the Captain Cook Highway.

Every Australian should know the story of how, having made his way through the treacherous waters of the Great Barrier Reef for hundreds of kilometres, Captain James Cook ran the H.M. Barque Endeavour aground on the Endeavour Reef at a place he aptly named Cape Tribulation. His diary for Sunday 10 June and Monday 11 June, 1770 records: "The shore between Cape Grafton and the above northern point forms a large but not very deep bay, which I named Trinity Bay, after the day on which it was discover'd; the north point Cape Tribulation because here began all our troubles.

Cape Tribulation in Daintree National Park
Originally known as the Cape Tribulation National Park, and covering 16,965 ha, this area is now the Daintree National Park and covers 56,500 ha. It is an area of breathtaking beauty with mountain ranges rising sharply behind the narrow coastal strip and dense rainforest reaching to edge of the beaches. With a bewilderingly rich variety of flora it is now recognised as the last extensive stand of undeveloped lowland rainforest in Australia (and possibly the oldest rainforest on earth) with such ancient species of fern as the beautiful flowering Idiospermum australiense and the Angiopteris, the world's largest fern. The rainforest is estimated to have existed for over 100 million years. Check out http://www.nprsr.qld.gov.au/parks/daintree-cape-tribulation/ which has a downloadable locality map.

Cape Tribulation Lookout
At Cape Tribulation the National Parks and Wildlife Service have installed a 400 m cement path and boardwalk, known as the Kulki Boardwalk, through the rainforest to the headland where a lookout point provides excellent views across Cape Tribulation Beach. There is a useful map at http://media.travstar.com.au/downloads/rgMap_47.pdf.

Mason's Guided Walks
The original European settlers in the area, the Masons, offer two hour and half day guided tours in their privately owned rainforest. There are jungle tracks on their 170 ha property and they offer local information about fauna and flora. They also have night walks which pass through the property and end on the banks of the Myall Creek where crocodiles are often spotted. tel: (07) 4098 0070.

Mount Sorrow
Mount Sorrow is 850m high and was named by Captain Cook. There is a trail which runs off the end of the sealed section of Cape Tribulation Road. The mountain is responsible for one of the few equatorial climates in Australia with high temperatures, humidity and rainfall. There is a downloadable map - http://www.destinationdaintree.com/welcometodaintree.pdf - on the Welcome to Daintree brochure which also includes Cape Tribulation Environs map.

Driving from Daintree to Cooktown
Travelling from the south, the road from Daintree to Cape Tribulation crosses the Daintree River by punt and is sealed to Cape Tribulation. If there are problems they are largely due to the amount of large traffic (basically tour buses from Cairns and Port Douglas) which uses the road to travel to the lookout and give passengers a brief experience of travelling through the Daintree Rainforest.

From Cape Tribulation to Cooktown the road, which was built by the local council (ably encouraged by Premier Joh Bjelke-Petersen) in 1983 despite passionate protests from environmentalists, is challenging and, in the minds of many, a road that should never have been constructed. It is an ugly dirt-red gash across the face of the rainforest which is characterised by steep gradients, narrowness, bulldust, cavernous potholes in the dry season and quagmires of mud in the wet. It is for 4WD vehicles only.

The road travels through incredibly beautiful country. If you are determined to make the journey make sure you visit the Wujal Wujal Falls (a thirty minute walk from the track); pause and inspect the Wujal Wujal Arts & Cultural Centre which is open from 10.00 am - 4.00 pm and has interesting examples of local Aboriginal art; and marvel at the strange Black Mountain, a mountain of black granite boulders which looks as though it has been placed beside the road by some giant. It is known as Kalkajaka (‘place of the spear’) and is an important meeting place for the Eastern Kuku Yalanji Aboriginal people. Visitors are advised not to venture onto the boulder field.

The real challenges of the route are:

(a) the Bloomfield River (see the photos) is tidal and cannot be crossed in safety at high tide or when there has been rain. Every driver needs to determine, with care, when low tide is occurring and aim to get to the river as close to that time as possible.

(2) the road becomes impassible during the wet season because the bulldust turns to mud and there are washouts and collapses.

The road has, sadly, developed into a challenge for 4WD drivers. There is even a downloadable brochure - http://tourism.racq.com.au/__data/assets/pdf_file/0003/56721/Cape-Tribulation-to-Cooktown.pdf - titled Bring Back the Queensland Road Trip. There is also a lot of good advice at http://douglas.qld.gov.au/road-conditions/bloomfield-road-cape-tribulation-to-cooktown/ which is the local shire's website.

Bloomfield Lodge
It is not cheap. Room prices, per person, range (in 2014) from $368-$568 per night. However the setting is glorious and if you want to experience what it is like to live in a rainforest on the edge of the Coral Sea, and eat and be treated to five star service, then Bloomfield is about as good as it gets.

Bloomfleld Lodge is located on the coast some 120 km north of Cooktown and deep in the Daintree Rainforest. The only access is by water and, if you are alert, you can see the local crocodiles lazing in the mud on the banks of the Bloomfield River as the boat takes visitors from the local airstrip across the estuary to the Bloomfield jetty.

The tides are so large, and the mouth of the Bloomfield River so shallow, that the boat carrying visitors nudges towards the lodge until it runs aground some distance from the shore at which point a tractor is backed into the water and hooked onto the boat.

A short walk up the hill and you are in a rainforest resort paradise. There’s a freshwater pool with deck chairs; a huge, open-air al fresco dining area; and on narrow bush tracks and across a swinging bridge are cabins with overhead fans, mosquito nets and wooden-shuttered windows that gaze out through the canopy across Weary Bay.

Restricted to only 36 visitors, Bloomfield Lodge is a unique destination where the emphasis is on relaxation and rainforest experiences. It is possible to hire a boat and go out to the Great Barrier Reef for either snorkelling or big game fishing but the emphasis is on the lodge’s two main, and free, activities. There is a guided rainforest walk lasting two to two-and-a-half hour which does nothing more than make its way up the narrow valley behind the lodge, reach the top of the hill and then descend down the other side. Led by a well-informed guide it includes sightings of rare orchids, exotic lichens and the possibility of seeing the magnificent Ulysses butterfly.

The Bloomfield River cruise, also lasting two to two-and-a-half hours, heads up the Bloomfield River to the causeway at the local Aboriginal community of Wujal Wujal. Most trips include sightings of saltwater crocodiles which glide through the river’s muddy waters searching for places on the banks where they can bask in the sun.

* For thousands of years prior to the arrival of Europeans the Daintree Rainforest was home to the Eastern Kuku Yalanji Aborigines of which the Wujal Wujal were a subgroup.

* In June, 1770 Captain James Cook sighted and named Cape Tribulation. His diary entries for the night of Sunday 10 June and the morning of Monday 11 June 1770 record the events: "The shore between Cape Grafton and the above northern point forms a large but not very deep bay, which I named Trinity Bay, after the day on which it was discover'd; the north point Cape Tribulation because here began all our troubles.

Cook's vessel, the H.M. Barque Endeavour, ran onto a section of the Great Barrier Reef now known as Endeavour Reef. The vessel managed to continue up the coast to the Endeavour River near present-day Cooktown where, for some months, it was laid up for repairs.

* The area was not settled until the 1931 when the Mason family arrived and attempted to live on a mixture of timber cutting, cattle and fruit and vegetable growing. They had limited success.

* In 1962 a gravel road was cut from the Daintree River to Cape Tribulation.

* In 2002 the road from Daintree River to Cape Tribulation was sealed.

There is a useful commercial site - http://www.capetribulation.com.au - where it is possible to book both accommodation and tours. 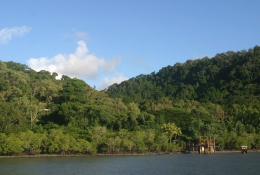 Bloomfield Lodge in the Daintree Rainforest north of Cape Tribulation. 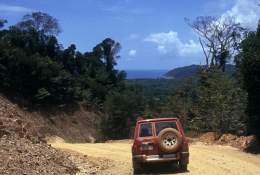 The road from Cooktown to Cape Tribulation (photo taken 1990) 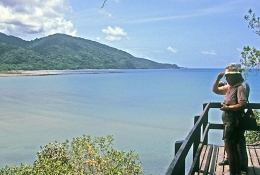 Looking across the bay from Cape Tribulation. 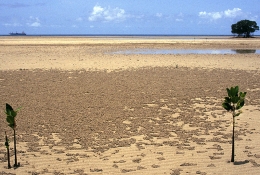 Mangroves shoot in the muddy sand off Cape Tribulation. 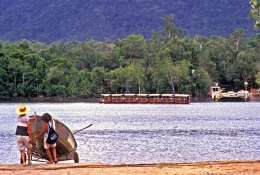 Crossing the Daintree River on the road to Cape Tribulation and Cooktown. 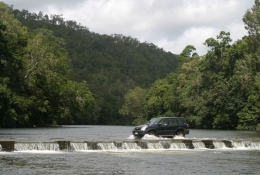 Crossing the Bloomfield River between Cape Tribulation and Cooktown. 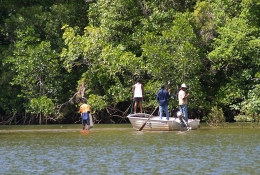 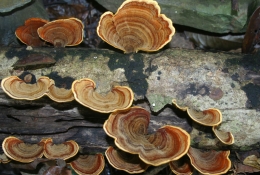 Fungus on the trees in the Daintree Rainforest.

A saltwater crocodile waiting for prey in the Bloomfield River.