Capel lies between the main centres of Bunbury and Busselton and is situated on the Capel River, a short distance from the coast. From Capel to the beach at the Peppermint Grove is a short, winding country road which reaches 29 km of beachfront which is typical of the South West area of Western Australia. It is a combination of pristine white sands, clear water and dramatic dunes. Today Capel is noted as a fast growing township which is a mixture of urban development, rural countryside, Jarrah and Tuart forests, and important mining by Iluka Resources which specialises in mineral sands exploration and development.

Capel is located 196 km south of Perth via the Kwinana Freeway and National Highway.

The Capel River was named by John Garrett Bussell, an original settler at Augusta, after his daughter Capel Carter Bussell. By 1844 the settlement was known as Collingnup. It was only changed to Capel in 1899.

Minninup Homestead
Located on Mangles Road, Minninup Homestead was listed by the National Trust in 1973. It was built in 1848. A huge two-storey farmhouse it was built from limestone which was quarried on the property. The Heritage Council describes it as "Originally a double story Victorian Georgian dwelling with an attic, constructed of locally quarried dressed limestone with a shingle roof. In the 1902's the roof was replaced with corrugated iron, and the six dormer windows were replaced with small skylights. In 1968 restoration began. In 1987 ground floor extensions were made." It is not open to the public but can be seen from the road. Check out http://inherit.stateheritage.wa.gov.au/Public/Inventory/Details/f7d5c73d-4219-42ad-a9ac-9baccaf0722f for more details.

Rogan Josh
The great racehorse, Rogan Josh, can be seen (and patted) in a paddock near the centre of the town. He was born and bred in Capel and became nationally famous when he won the Melbourne Cup in 1999. There is additional information about his racing achievements at the Capel Tavern and he can be seen in the paddock adjacent to the Capel River Bridge.

Tuart Forest National Park
The Tuart Forest is now a remnant of what was once a significant stand of trees. Prior to the arrival of Europeans there were over 111,600 ha of tuart woodland. Today only 30,316 ha remains of which 9,482 ha is protected and of that 2049 ha are in the Tuart Forest National Park.
Located 6 km south-west of Capel, the Tuart Forest National Park lies on the coastal plain between Capel and Peppermint Grove Beach. It is recognised as the largest naturally occurring Tuart forest in the world. The Department of Environment and Conservation has three suggested walks.
* At Malbup on Layman Road take the 400 m Waterbirds Walk beneath tuart and peppermint trees on a raised boardwalk to a bird hide.
* At James Block on Higgins Road there is a walk through tuarts which offers a perspective on the way the tree regenerates after fire. It was damaged in the 1970s by a serious bushfire.
* At Malbup on Layman Road there is a 1.4 km Possum Trail where, with a torch, it is possible to see possums and other wildlife.

Ludlow Tuart Forest
Located 10 km south of Capel on Tuart Drive is the Ludlow Tuart Forest. A sign explains the significance: "Tuart grows naturally only in South West of Western Australia, on the coastal limestone band from Busselton north to Jurien Bay, over 400 km. It is the largest naturally occurring tree on the Swan Coastal Plain.
"Tuarts grow rapidly. They have a pale grey-white trunk with a rough, fibrous bark that flakes into small pieces. The foliage is grey-green and the leaves are not uniform in shape, being either elongated or slightly curved, usually 90-160 mm long. Tuarts flower in summer and early autumn; the flowers are creamy-white and sweet smelling. The botanical name Eucalyptus gomphocephala refers to the club-shaped buds. The gumnuts are narrow, cup-shaped and 13-25 mm long.
"Tuart distribution falls into six distinct tuart ecosystems: four are considered rare due to their limited size and range. Ludlow Tuart Forest is one of these ecosystems. Tuarts grow in many forms, but here at Ludlow the tallest tuarts are found: upright, single stemmed and up to 40 m tall."

Capel Wetlands
Located 5 km south of Capel on Tuart Drive (it runs off the Bussell Highway) the Capel Wetlands and the Capel Wetlands Centre are excellent locations to study the migratory waterbirds who come to the area. There is an excellent website with a map and lots of useful information. Check out https://www.researchgate.net/figure/Map-of-the-Capel-Wetlands-Centre-showing-the-lakes-and-the-position-of-the-public_fig1_44961747. It explains: "The Capel Wetlands Centre was established in 1985 when a sand mining company resolved to rehabilitate large pits at Capel as an environment for waterbirds instead of as pine plantation and pasture. The Royal Australasian Ornithologists Union was commissioned to manage the rehabilitation and instituted a research programme that aimed to identify management options leading to the development of a self-sustaining ecosystem at the site. Hydrology, water quality, biological resources and rehabilitation techniques were examined. As the Capel Wetlands Centre matured it became a focus for school and university projects and a regional recreational resource within the Living Windows Ecomuseum system ... The wetlands that make up the Capel Wetland Centre (CWC) are a series of approximately 15 lakes, swamplands and sumplands. The Centre has been developed from mining pits created by sand mining." For school excursions and group bookings contact Capel Wetland Centre on (08) 9727 1070.

Ironstone Gully Falls
The Shire of Capel website explains: "Located 17 km south east of Capel on Goodwood Road, this historic picnic area was reserved in 1903 for use as a recreation area for the Capel River settlers. Although not an official trail, the site is famous for the rich red rock over which a small tributary from the Capel River tumbles. During the wetter months, the stream (which has followed a course through the Jarrah forest) crosses under Goodwood Road, gently meanders over a series of rapids before dropping over a nine metre high ledge.
During Spring, the trail features wildflowers, and the area has a remnant jarrah bushland surrounds. An existing narrow vehicle track winds its way throughout the reserve, providing an ideal ready-made walking and cycling circuit. Bird guides list this site for its potential for sighting raptors, Red-Tailed and Long-Billed Black Cockatoos, and Scarlet Robins." Check out https://capel.wa.gov.au/trails/capel-trails.

* Prior to the arrival of Europeans the district was inhabited by the Wardandi Noongar Aboriginal people.

* The first European to explore the district was F. Ludlow who reached the river in 1834.

* Lieutenant Bunbury travelled up the Capel River in 1836. His noted that "The land on both sides of the river is rich and fertile and well timbered with Red Gums. The stream is well adapted for the establishment of water mills and the body of water quite sufficient to turn several either for grinding or for sawing timber".

* The river was named by John Garrett Bussell after his daughter Capel Carter Brockman. For over sixty years both the town and the river were known as Coolingup.

* The first settler into the area was James Key Child who arrived in 1843 and established the property known as Minninup on Mangles Road.

* By 1844 there were discussions about establishing a town but it did not happen.

* In 1848 James Key Child built Minninup Homestead, a huge two-storey farmhouse, from limestone which was quarried on the property.

* The development of the area occurred slowly through the nineteenth century. Settlers arrived and established an economy based on orchards and dairy farming.

* The name was eventually changed from Coolingup to Capel in 1899.

* In 1959 Westralian Sands started mining in the area.

* In 1998 Iluka Resources was formed to mine the area.

There is a useful local website with extensive information about the town - http://www.mycapel.com.au/. 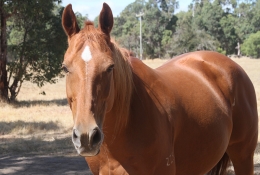 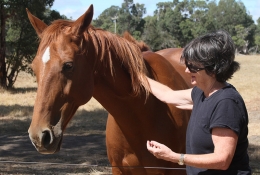 Rogan Josh loves to be pampered 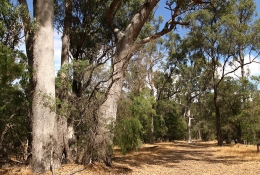 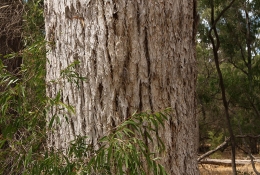 The bark of the Tuart tree 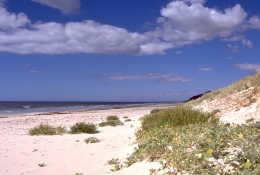