Access point to Capertee Valley, the second largest canyon on the planet.

Capertee is a quiet village on the Castlereagh Highway between Lithgow and Mudgee. Its primary appeal lies in its proximity to the fascinating shale mining ghost town of Glen Davis and its access to the beautiful Gardens of Stone National Park and the impressive Capertee Valley.

Capertee is located 183 km north-west of Sydney via the Great Western and Castlereagh Highway. It is 46 km north of Lithgow and 84 km south east of Mudgee.

It is accepted that Capertee is a corruption of Capita which was the name given, in the 1820s, to his nearby property by the wealthy grazier, Sir John Jamison.

Capertee Village
Capertee is one of those villages where everything is centred around the main road and where it is spread along that road. It is there to cater from travellers. There's a school, a police station, the adjacent courthouse, a memorial hall, a bushfire brigade, a post office, a railway station just off the highway, the pub, a garage and a couple of tiny churches. The Royal Hotel, the solitary pub on the main road, came into existence around 1870. It was burned down twice and the present structure which was built in the 1930s incorporates some of the sandstone from the second building (c. 1895).
The school was opened in 1882, although the present school house dates from 1923. The Kookaburra army recruiting march of 1916 camped on the floor of the Capertee school en route to Sydney. The memorial hall was built in 1951 as a tribute to the 80 men who enlisted in the wars of the 20th century. The bricks were collected from the abandoned shale refining retorts at neighbouring Torbane. The old lock-up (1897) can still be seen behind the modern police station.

Pearsons Lookout
Located 2 km south of Capertee on the Castlereagh Highway is Pearsons Lookout. It provides the best views over the Capertree Valley to the east. The valley, which is 30 km across, is recognised as the world's second largest canyon. It is hard to imagine but underneath the valley is a vast layer of coal and oil shale.

Gardens of Stone National Park
The Gardens of Stone National Park is an inaccessible, but spectacular park, which is 177 km from Sydney via the Great Western and Castlereagh Highways. Access to the park is via a 4WD road at Ben Bullen which is signposted 'Gardens of Stone National Park'. It leads through to the Wolgan Valley Road which heads north-east from Lidsdale (on the Castlereagh Highway) to the historic mining settlement at Newnes. There are useful maps at http://www.nationalparks.nsw.gov.au/visit-a-park/parks/gardens-of-stone-national-park/visitor-info#Getting-there-and-parking.
Quite unlike the rest of the Blue Mountains (it is at the very edge of the mountains) the Gardens of Stone National Park is a very beautiful wilderness area of limestone outcrops, precipitous sandstone cliffs, pagoda-like rock formations and a diversity of fauna and flora. The area is ideal for bushwalking, particularly in the MacLeans Pass area and around Donkey Pass, although there are no marked trails or facilities. You can walk to Pantoneys Crown from Baal Bone Gap.
Of particular interest to 4WD enthusiasts is the Ben Bullen Trail which, as the National Parks site notes, "turns Gardens of Stone National Park into a spectacular adventure for driving enthusiasts. Suitable for high clearance and well-equipped 4WDing, the trail snakes along the Great Dividing Range, through Ben Bullen State Forest, and into the park. The 4WD trail passes steep sandstone cliffs along the way, with scenic views over the Wolgan and Capertee valleys." A sensible starting point, with lots of good advice, is the National Parks and Wildlife Service Office, Govetts Leap Road, Blackheath, tel: (02) 4787 8877.

Capertee Valley
It is hard to get a good overview of Capertee Valley. The best view is from Pearson's Lookout on the Castlereagh Highway between Capertee and Cullen Bullen. And the best access point is the Glen Davis Road which heads north and east out of Capertee.
The valley's main claim to fame is that it is the world's second largest canyon and it is almost one kilometre longer than US's Grand Canyon.
Capertee's sandstone escarpments soar hundreds of metres and encircle the valley from south of Mount Marsden near the town of Capertee all the way to the mining ghost town of Glen Davis. At its widest point the escarpments are in excess of 30 km from north to south.
One of the most impressive features is Pantoneys Crown, a sandstone monolith, a kind of mesa, which is the centrepiece of Pantoneys Crown Nature Reserve, a 3,230 ha area surrounding Pantoneys Crown (it is now part of the Gardens of Stone National Park) which dominates the western end of the valley. It is a column-like, flat-topped mountain, named after William Pantoney, one of the members of the first European expedition through the area - the expedition of John Blackman in 1821.
In comparison to the Blue Mountains National Park it is easy to underestimate Capertee Valley but it is no less impressive. It is characterised by slot canyons, its dramatic and untouched scenery, its billabongs lined with water reeds, its banded granite outcrops and its Aboriginal rock art of stencilled hands, boomerangs and throwing sticks painted by the local Wiradjuri people. Small clearings like Heffron's Hole were once prized by bushrangers, who hid their stolen cattle there as recently as the 1920s. Surrounding mountains and valleys are laced with old bush tracks, bridle paths and dray tracks from Nulla Mountain all the way to Putty.
The valley became important in the 1930s when it was realised that it had vast oil shale reserve. The road through the valley reaches the ghost town of Glen Davis which was built in the late 1930s to service the mining of the oil shale industry.
There is a useful website. Check out https://web.archive.org/web/20110724022626/http://www.tourism.lithgow.com/glendavis.html.

Glen Davis
Glen Davis, an old shale-mining ghost town on the Capertee River, is located 35 km east of Capertee on the eastern rim of the Capertee Valley.
The first mining tunnel, established in 1881, later became the basis of the major mining enterprise which opened in 1938. The Post Office was opened the following year. A town of some 2,500 people developed around the mine, which was named Glen Davis after the Davis Gelatine interests who headed the mining consortium.
The operation closed down in 1952 due to high costs and the increasingly small output, leaving what remains today - a fascinating ghost town characterised by crumbling furnace ruins, retorts and collapsed shafts covered in vegetation and surrounded by steep sandstone cliffs and a profuse array of birdlife.
Glen Davis has a picnic area with an amenities block. There is a bushwalking trail (22 km return) to Newnes up the Green Gully, in the Wollemi National Park, following the old pipeline track. There are lyrebirds, cycads, banksia serrata and assorted eucalyptus.
The only realistic way to see the ruins of the old shale mining town is to go on one of the Glen Davis Shale Oil Works Tours. Alex Mateer, who runs the tours, explains: "We do a weekly tour every Saturday at 2.00 pm. We meet at the front gate of  “The Poplars”, Glen Davis. The tour costs $15 pp,  ($8 for children under 12 yrs) and takes approx 2 hours - it's a walking tour, where you can see the ruins and hear the stories, so dress for the weather and bring some water. We also sometimes do private tours by arrangement, but they are more expensive.  It's always good to prebook and that way I can get in touch if we have to cancel for any reason (very unusual, but it has happened). You can do this by email (rickstalex@gmail.com) or phone (02) 6379 7380."

* Prior to the arrival of Europeans the district was occupied by the Wiradjuri Aboriginal people.

* The first European in the district was James Blackman who surveyed a roadway from Wallerawang to Mudgee in 1821.

* Allan Cunningham, the well known explorer, investigated the flora and fauna of the area in 1822-23.

* Sir John Jamison established a large cattle station in the district in the 1820s. It was called  'Capita'.

* The Corlis and Gallagher families took up land in the valley in the late 1840s.

* A source of good water was found near the intersection of the roads north to Mudgee and east into the valley. It became known as Capertee Camp.

* In 1851 a 48 kg gold nugget was discovered in the area by an Aboriginal prospector and other finds were then made on the Turon River and nearby creeks.

* By 1870 Capertee village was growing around James Shervey's Inn at Capertee Camp.

* By 1880 there were only a dozen buildings in the village.

* The railway arrived from Wallerawang in 1882.

* A school, initially in the form of a tent, was established. It was replaced by a pre-fab building in 1883.

* Oil shale was discovered on the future site of Glen Davis in 1873.

* The first mining tunnel at Glen Davis was established in 1881.

* Mines began to open around Capertee in the 1890s, including one on Blackman's Crown.

* Shale production went into decline around 1903.

* By 1913 work at the mines in the district had virtually ceased.

* In 1924 a new company built an aerial railway to the Torbane siding and established a retort.

* A committee was set up in 1933 to investigate the feasibility or reopening Glen Davis. Its report in 1934 led to the formation of National Oil Proprietary Ltd (NOP) in 1937.

* The works at Glen Davis were opened in 1938 and a town of about 2500 people quickly developed around the works which employed 1600 people at their peak in the 1940s.

* Glen Davis was in decline by 1949. Costs were high, output was low and cheap crude oil was available from the Middle East.

* The machinery from Glen Davis was stripped in 1953.

* In the 1970s, some of the old properties were subdivided and sold as hobby farms and retirement retreats to city dwellers, bringing people into the valley, though mostly at weekends.

* When oil prices increased after 1975, coalmining took an upturn and new mines opened.

* An open-cut gold mine briefly operated on top of a mesa in the valley though it closed in the early 1980s due to the collapse of gold prices. 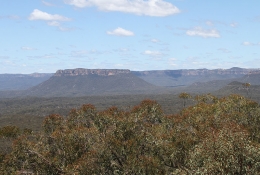 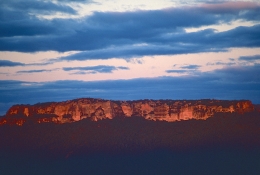 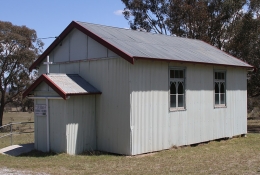 The tiny Capertee Catholic Church - made from corrugated iron 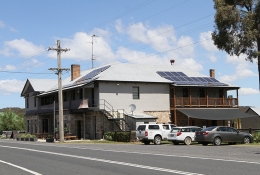 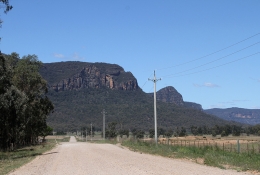 The road to Glen Davis 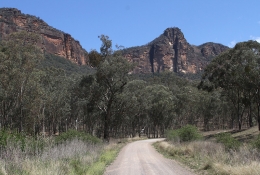 The sheer cliffs at Glen Davis 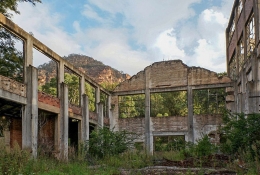 The ruins at Glen Davis 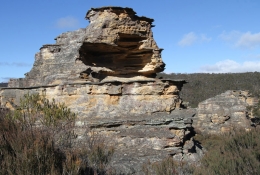 Unusual formations in the Gardens of Stone National Park