In theory Captains Flat should be a ghost town. It had two brief periods of prosperity when the town's population rose to 5,000 and when mining for lead, zinc, copper, sulphur, gold and silver drove the local economy. The first lasted from 1884-1899 and the second from 1937-1962. After each mining boom people left the town in great numbers. It has been saved by its proximity to Canberra which makes it a pleasant day tripper destination with a large pub and interesting relics of the old mine. The town itself is nestled into a valley with the hills around denuded by constant mining. The end result is a mixture of historic buildings and remnants of mining.

Captains Flat, standing 922 metres above sea level, is located 327 km south west from Sydney via the Hume Freeway and 64 km south-east from Canberra.

Local folklore claims that Captains Flat was named after a large white bull named Captain. The story goes that Captain was part of a bullock team but he had a tendency to slip away from the rest of the team and head for the grassy paddocks near the Molonglo River. Drovers used to notice Captain grazing on "the flat" and it was a short step from there to the name Captains Flat. The pasture the old bull was partial to is now the local football field.

Captains Flat Heritage Trail - Pathway to Gold
Captains Flat is an historic town where the visitor should spend a few hours just wandering around. This can be effortlessly facilitated by downloading the two page Pathway to Gold: Heritage Trail of a Mining Town at http://www.captainsflat.org/content/brochure_page_1.pdf and http://www.captainsflat.org/content/brochure_page_2.pdf. It lists a total of 29 places of interest around the town. Among the many places worth exploring are the historic Police Station and Court House (1896) with the crest of Queen Victoria; Wilkins Park (beside the Molonglo River) - named after Bert Wilkins, the Mine Operations Manager, it has an historic water trough as well as good picnic facilities; the Captains Flat Hotel (1938) which, when it opened, boasted that it had the longest bar (over 30 metres) in Australia; the old mine road (just beyond the Captains Flat Hotel) where you can get excellent views from the Lookout and inspect the Gantry Crane - it takes the visitor to the top of the old mine works and offers excellent views across the valley. The area has bits of old mining equipment and is still largely denuded as a result of the mining activities; and Keatings Collapse, where sections of the hill collapsed into the mine - it collapsed as a result of miners digging into the hill, which is located beside the Jerangle Road to Cooma beyond the Captains Flat Hotel (1938).

Captains Flat and Mining
The excellent Welcome to Captains Flat website has a detailed explanation of the geology of the area. This extract, taken from http://www.captainsflat.org/tour/tour02.htm, explains the origins of the lode. "Below the surface flows of acid volcanics there is often a great mass of molten granite, and the lead, zinc, copper, sulphur, gold and silver separate out from the main molten granite mass (boil out from the top of it) and sometimes make their way to the earth's surface, through cracks and fissures (faults); and if such material boils out below sea level, and solidifies, and gets covered with sea floor sediments, it becomes what we term a syngenetic stratiform sulphide deposit. The first such syngenetic, stratiform sulphide deposit to be recognised as such in Australia was in fact that at the great Rosebery lead, zinc, copper mine in Tasmania, but the first one recognised on the Australian mainland is the one at Captain's Flat.
"The valuable elements (the lead, zinc, copper, sulphur, silver and gold) came welling up from deep within the earth (being some of the relatively easily volatilised material in the molten granite) in Silurian times (about 420 million years ago).
"The lead and zinc (and a little copper) at Captain's Flat were finally deposited on the floor of the ancient Silurian sea, and covered over with silt, to be later rediscovered as the Captain's Flat mine long after the sea had gone and the land had risen up as a mountain range. Some of the gold and silver went in with the lead and zinc and copper sulphides, but some stayed lower down in the quartz reefs and in the acid volcanic material in the root of the volcanic plug itself."
The productivity of the mine was remarkable. "Between 11 January 1939 and the closure of the mine on 11 March 1962, the Lake George Mine produced 4,009,796 tonnes of ore containing the following concentrates: 360,104.3 tonnes of lead; 154.59 tonnes of silver; 2,850.06 tonnes of gold; 72,615 tonnes of copper; 588,143.6 tonnes of zinc and 501,358.5 tonnes of pyrites."

Deua National Park
Located 41 km south-east of Captains Flat is Berlang Campground which is the the entrance to the walk through Deua National Park to inspect the Big Hole, a limestone collapse which is nearly 100 metres deep and 50 metres wide. The walk to the Big Hole is 3.5 km return and involves crossing the upper reaches of the Shoalhaven River and walking through beautiful, unspoilt countryside. It will take at least 90 minutes and can take up to 2 hours 30 minutes. Check http://www.nationalparks.nsw.gov.au/things-to-do/Walking-tracks/The-Big-Hole-walking-track for details about the walking track.

* The first European to settle in the area was Captain William Sawyer in 1833.

* In 1868 Hoskings property, Foxlow Station, was sold to Thomas Rutledge.

* It was not until the late 1870s, when gold was discovered, that the town really developed.

* The Reverend W. B. Clarke, an enthusiastic geologist, discovered gold in the area as early as 1852.

* Clarke reported his discovery to the local landholders who, not wanting thousands of prospectors all over their land, managed to keep the news quiet until 1874.

* In 1883 copper was found. That year a Post Office was opened in the town.

* In 1885 Blatchford built a Kahlo and Dobb Pacific Water-jacket smelter. In that same year a General Store was opened.

* By 1889 the town had its first bank - the Government Savings Bank of NSW.

* By 1890 a furnace named Koh-i-noor began heap roasting lead. Huge amounts of sulphur were released killing off the vegetation surrounding the plant.

* In 1894 the Koh-i-noor and Commodore-Vanderbilt mines were amalgamated to form the Lake George Mining and Smelting Company.

* By the late 1890s the town was booming. The population reached 3,000 and it had five hotels, an oyster bar and a jeweller.

* The Court House was opened for business in 1899.

* By 1899 the mines were closing down and the population of the town declined.

* By the 1930s there were only about 150 people living in the town and most of the equipment which had been used in the 1890s had been removed.

* In 1937, Lake George Mines built a 39 kilometre railway to Bungendore and with new drilling techniques and flotation plants reopened the whole area. Once again Captains Flat was successful.

* By the end of the 1930s it was second-only to Broken Hill as its mines produced vast quantities of gold, silver, lead, zinc (it was the most important of all the minerals being mined), copper and iron pyrites.

* In 1937 the ore reserves in the town were estimated to be 5 million tons. The Union Bank opened its doors to customers.

* By January 1939 a railway line connected Captains Flat with Bungendore.

* In the early 1940s a new theatre, hospital, swimming pool, ambulance service, doctors, nurses, even football players were all paid for by the company, as were street lighting, electricity and domestic water.

* The local miners went on strike for seven months in 1948.

* In April, 1963 Lake George Mines buildings and equipment were auctioned.

* In 1969 the town was used as a location in the movie Ned Kelly starring Mick Jagger.

* In 1978 the town was used as a location for My Brilliant Career.

There is no visitor information in the town but the Welcome to Captains Flat website is very comprehensive and useful. Check out http://www.captainsflat.org/touristinfo.htm.

There is a useful local website. Check out http://www.captainsflat.org. 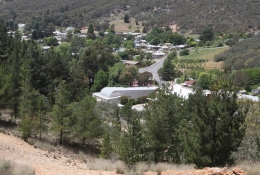 View over the town from the lookout near the mine shaft. 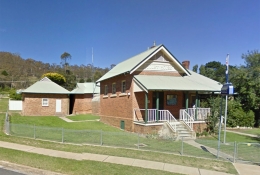 The Court House and Police Station (1896) 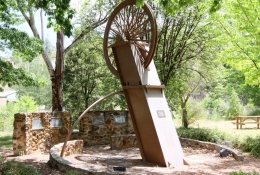 Memorial to those who lost their lives in the mines at Captains Flat. 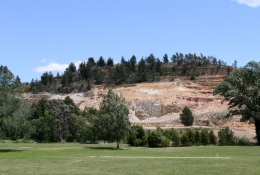 View across the Colin Winchester Oval to one of the mines. 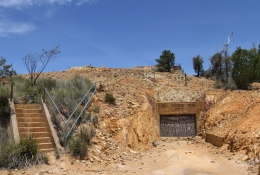 Entrance to the Lake George Mine (1937) near the town lookout 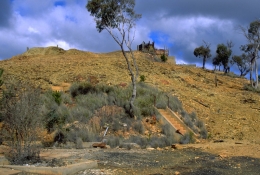 Remants of the old mine on Miners Road above the town. 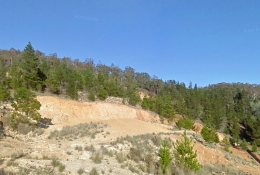 Keatings Collapse on the Cooma Road out of town. 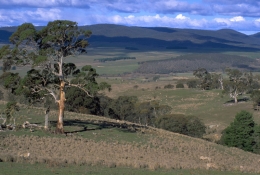