Carisbrook is a quiet town which is obviously overwhelmed by the proximity of the larger, and more prosperous, Maryborough which is only 7km to the west. Its appeal lies in the interesting collection of bluestone buildings and the pleasant walks along the Tallaroop Creek.

Carisbrook is located on the Pyrenees Highway 163 km north-west of Melbourne between Castlemaine and Maryborough.

Carisbrook was named by Robert Hoddle in a memo he sent to Surveyor William Swan Urquhart in July, 1851. The name came from Carisbrooke on the Isle of Wight.

Lock-Up
Standing in the park beside Bucknall Street is the town's one significant historic building. It is so well preserved it looks like a replica but the town's vernacular log lock-up is thought to have been built around 1852 on the police paddock and moved to its present site in 1886. The walls are made of interlocking horizontally-laid logs. The shingle roof has been replaced with corrugated iron.

Tullaroop Creek Nature Trail
A truly delightful walk along the banks of the Tullaroop Creek. The careful walker, helped by the brochure and nine markers, can expect to see platypus (at dawn and dusk), kookaburras, gums scarred by Aboriginal axes and to begin to understand how the Jajowurroung Aboriginal people as a vital food supply.

Junction Lodge
Located on Camp Street, Junction Lodge is a complex of homestead buildings comprising stables, a barn, a blacksmith's, a kitchen, workers' quarters and a two-storey house built from bluestone around 1873.

Carisbrook Archaeological Site
About 5 km south-east of town, on the banks of Tullaroop Creek, is a well-preserved Aboriginal stone arrangement measuring 60 m by 5 m. It is claimed as one of only four stone arrangements in the state and the only one of a boomerang design. Ask at the Maryborough Visitor Centre for details and directions.

* Prior to European settlement the district around Carisbrook was home to the Jajowurroung Aboriginal people who built huge stone-shaped boomerangs out of stones where they held their initiation ceremonies. Their ancient presence can be seen on the scar trees on the Nature Walk.

* In the 1850s, during the goldrushes in the area, the Simson brothers, who later became squatters in the district, collected tolls from diggers travelling between Castlemaine and Maryborough and consequently made a lot of money. It was on the back of this lucrative trade that the township grew to meet miner's needs for supplies.

* The district population increased dramatically in 1863 when gold was discovered at Majorca 8km south of Carisbrook and 15 000 diggers rushed to the area.

There is some useful local information on the Maryborough website. Check out http://www.visitmaryborough.com.au/carisbrook.html 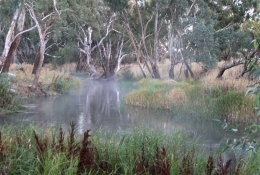 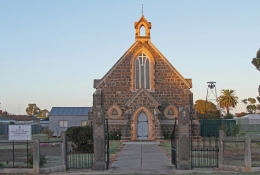 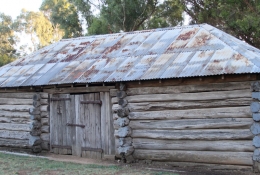 The police lock-up dates from around 1852.