Carnamah is a northern wheatbelt town in a shire which stretches from the coast through Eneabba to Carnamah and has a total area of 2,834,000 ha. The town is a service centre for the surrounding wheat, sheep and mixed farming properties. Like nearly all of the Central West the area is noted for its wildflower displays in late winter and early spring with the area around the Yarra Yarra Lakes being particularly impressive.

Carnamah is located 303 km north of Perth via the Midlands Road.

Carnamah is named after "Carnamah", the name of a pastoral property established by Duncan Macpherson in the late 1860s. Macpherson's property took its name from Carnamah Spring, first mentioned in an application for grazing leases in 1861 in the name of Macpherson and Slater. The name is probably a word in Amangu of unknown meaning or, possibly, a Gaelic word meaning "cairn of the cattle" or "cattle rocks".

Exploring the Heritage of the Town
The best way to explore the town's historic buildings is to walk down Macpherson Street and read the interesting and informative blue signs which are located outside the buildings of interest. There are plaques outside the Bank of Australasia, the Post Office, the Museum, the Carnamah Hotel, the house at 14 Macpherson Street and the Corner Store. They provide both historic information, old photographs and interesting anecdotes relating to the buildings.

Carnamah Museum
The Carnamah Museum is located at 10 Macpherson Street and includes artefacts, photos, documents, a yard with sheds full of old machinery, tools and implements. It is open on Friday afternoon from 1.30 pm - 5.00 pm or on request if you tel: (08) 9951 1690 or 0458 576 758. The building was completed in 1925 using local stone quarried from the Macpherson's farm. Mr Kroschel, a policeman from Three Springs, carted the stone and  G P Duncan, was in charge of the building operations. The museum is a perfect introduction to the area. The displays can be seen on the internet at the unusual and fascinating Virtual Museum which has a series of pages devoted to the Macpherson Family, the Midland Railway, the Ready Made Farms, schools, toys, the First World War, local business houses, the post office, local biographies, milk, cream and butter and many more aspects of local life.

Post Office
The post office in Carnamah has a fascinating history which is recounted on the Carnamah website (check out http://www.carnamah.wa.gov.au/visitors/heritage/post-office). It records how: "Miss Elizabeth Macpherson was appointed as Morse Operator on 1st June, 1874, at a salary equivalent to $20.00 per annum, at Macpherson Homestead. This facility became a Post and Telegraph Office in 1885, and Miss Margaret Macpherson was postmistress until she retired on 4th August, 1913.
"The Post Office was moved to the Railway Station on Miss Macpherson’s retirement, 4th August, 1913. In 1915, it was transferred to Lou Parker’s tin shed at the corner of Caron and Macpherson Streets (later a supermarket and since burnt down).
"It was later moved to a stone building opposite the Hotel. Official status was gained on 6th December, 1926. The present site was purchased on 21st May, 1928, and building commenced. This building was opened on 30th June, 1932, by Senator P J Lynch. The Post Office was also the Telephone exchange with one operator until 1948, when two operators were used. The telephone exchange closed on 3rd November, 1976."

Uniting Church
The Uniting Church was once shared by the local Presbyterian and Methodist congregations. The clergymen used to travel from Geraldton (the Presbyterian minister) and Moora once a month. It was built in 1926 from stone quarried from the Macpherson farm.

Macpherson's Homestead
Located one kilometre east of the town on the Carnamah-Bunjil Road, the Macpherson's Homestead, an excellent example of the pioneering architecture used in the district, was built in 1869. It has been restored and can be seen by turning east at Waltons Farm Machinery corner and follow the signs. It stands on a gently sloping hill which affords views of the undulating surrounding countryside.
The homestead was built by Duncan and Mary Macpherson who settled in Carnamah in 1868. The Macpherson's established a pastoral station named Carnamah, and during their 70-year residence their homestead was known as Carnamah House. The northern telegraph line was built passing their homestead as it was the only permanent residence in the district. A telegraph office was run from an outbuilding by Duncan’s daughters for almost 40 years. From 1979 to 2004 the Carnamah Apex Club, Carnamah Restoration Society and the Carnamah Historical Society restored the homestead and in 1981 local farmers Glendon H. and Jennifer M. A. Lane donated ownership of the homestead and a parcel of surrounding land to the Shire of Carnamah. The building was officially opened on 23 October 2004 by Ian M. Macpherson (whose father Malcolm was the last Macpherson to own the homestead).
The Heritage Council of Western Australia assessed the homestead as having "played an important and successful role in the development and growth of the Carnamah district" and that "the place has particular structural interest, with its high walls and steeply pitched roof and bush rafters." The homestead is a permanent entry on the Heritage Council’s State Register of Heritage Places. The building can be inspected at any time but those who want to see the interior need to either email mail@carnamah.com.au or tel: (08) 9951 1690 or 0458 576 758.

Yarra Yarra Lakes
Lying to the west and north of Carnamah, the Yarra Yarra Lakes are an interconnected chain of salt lakes which tend to evaporate in the summer heat leaving vast wastelands of salt. There is a pinky colour to the salt in summer and when the lakes fill in winter they turn a deeper blue. The lakes cover an area of 11,900 ha, cover a total length of 25 km and, at the widest point, are 9 km wide. There is a lookout over the lakes on the Carnamah-Eneabba Road less than one kilometre to the west of Carnamah.

A New Way to Explore Western Australia’s Wildflowers
A full and comprehensive exploration of Western Australia’s wildflowers has always been a challenge. On one level they are everywhere. On another level, specific and rare wildflowers can be very difficult to locate.
The truth is that there are over 12,000 floral species and 60% of them are found nowhere else on the planet. Yes, it really is that remarkable.
Now, at last, in a miracle of political co-operation, nine local councils – Moora, Dalwallinu, Coorow, Perenjori, Carnamah, Three Springs, Morawa, Mingenew and Geraldton – along with some help from the WA state government, have come up with an excellent solution.
Historically trying to see the specific rare flowers was a logistical nightmare. When I first explored the wildflower area I can remember that I innocently asked where I might see a wreath flower (they are a flower which naturally forms itself in a circle like a wreath) at the local coffee shop in Morawa. Morawa is one of the famed locations for this unique plant.
I was told that there were some in the area but the person who knew was at the information office. At the information office I was advised, and this is verbatim, to "drive down the main street until you see the road that crosses over the railway line, drive across the line and past the Police Station and Fire Station (or is it the SES), turn right at the next road, continue up past the sheds for a couple of hundred yards and you'll see some beside the road". Absorbing the instructions I headed off and three minutes later, having noticed a sign reading "Wreath Flowers" on a fence, I found the plant.”
Yes, it really was that complicated. Locals were happy to help but it meant wandering around until you stumbled upon an expert ... unless you booked a coach tour with a gardening expert.
What the shire councils and the state government have done is take that kind of specific information and turn it into two, brilliantly constructed, wildflower routes through Western Australia’s Wildflower Country.
They have created two routes – The Wildflower Way and The Midland Route. The structure is inspired. There are a total of 38 places where the visitor, unfamiliar with the complexity of “chasing wildflowers”, is shown some of the floral uniqueness of the area.
The first – The Wildflower Way - starts in Dalwallinu and passes through Perenjori, Morawa, Mullewa and ends up in Geraldton. It has a total of 21 specific locations and, just like the woman who advised me 30 years ago, the instructions are suitably arcane: “Turn off the Mullewa-Wubin Road and travel 3 km on Offszanka Road, then turn left onto North-East Canna Road: site is near church, behind old hall.”
The second – The Midlands Route– runs from Geraldton in the north down through Mingenew, Three Springs, Carnamah and Coorow to Moora.
That’s the challenge. Wildflowers grow in the most unlikely places – and they seem to be in the same place year after year. To help, each floral site has a logo of four flowers and a street silhouette sculpture - so, hopefully, you won’t get lost.
The result: for the first time people wanting to see the wildflowers in all their diversity have logical maps and sensible signage to guide them.
The time to go and experience this unforgettable floral display: between the end of July and September. And, one word of advice, book your accommodation well ahead. Those tiny wheatbelt towns really don’t have very much accommodation and, quite frankly, some of it is very, very basic. There is more information at http://wildflowercountry.com.au. It is a hugely useful site.

* Prior to the arrival of Europeans the area was home to Aboriginal people from the Amangu language group.

* The Carnamah area was first settled by Europeans in 1861 when Duncan Macpherson moved sheep across from the coast and took up land to the east of the present townsite.

* In 1866 James Nairn and his family moved into the district.

* Macpherson's Homestead, an excellent example of the pioneering architecture of the district, was built in 1869.

* In 1874 the Macpherson homestead became the local telegraph office.

* In 1894 the railway reached a point near where the Macpherson homestead stood. The station was named Carnamah.

* With the railway came a small community of fettlers, gangers, labourers and the station manager.

* Joe Parker arrived to cut timber in 1900. He sold the timber to the mines.

* In 1907 Lou Parker, Joe's brother, took up land at Winchester, south of Carnamah.

* Between 1912-1913 the Midland Railway Company cleared land on 45 ready-made 400 acre farms. This resulted in 20 families moving into the area.

* In 1915 Arthur Darling became the first farmer in the district to grow wheat on a large scale.

* In 1916 Harry Parkin opened a second general store in the town.

* Between 1919-1923 a War Service Farming Scheme was established at nearby Yarra Yarra Lakes and 40 families moved into the area.

* In 1923 the Carnamah Road Board was established. That year the telephone arrived in the town.

* By the end of the 1920s Carnamah was recognised as one of the richest wheat producing areas in Western Australia.

* Some further War Service Farms were released in the 1950s after World War II.

* The Shire of Carnamah offices were built in 1980. 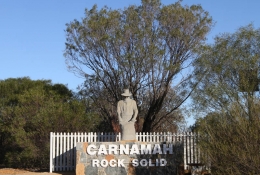 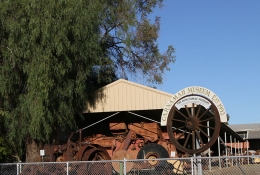 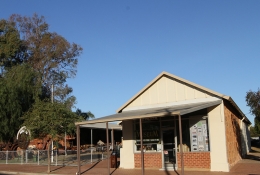 The Don Tearooms (1926) now part of the Carnamah Museum 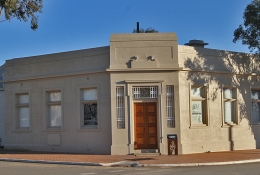 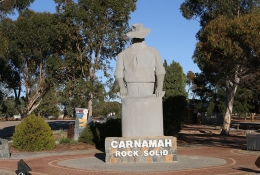 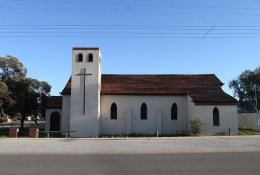 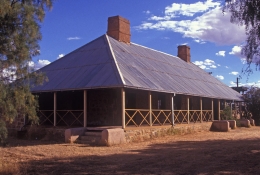 The Macpherson Homestead built in 1869.