Carrieton is a tiny town with a population of around 40 people in the middle of the Flinders Ranges. It is noted for the beauty of its location and the locals are suitably proud of the town which won tidiest and best presented small town in South Australia in 1980, 1981 and 1982. Today it is a stark reminder of the difficulty of farming this area on the edge of South Australia's vast desert.

Carrieton is located 91 km east of Port Augusta via Wilmington and 308 km north of Adelaide on the RM Williams Highway via Clare and Jamestown.

Carrieton was named after Lucy Caroline, a daughter of the South Australian Governor Jervois (1877-1883). She lived briefly in South Australia before marrying William Purey-Cust and returning to England where her husband became a Canon at Lincoln Cathedral.

Aboriginal carvings
An interesting collection of Aboriginal carvings (of unknown age and origin) are located exactly 9 km north-east of Carrieton on the Belton Road. The carvings are on the right hand side of the road. For more information ask at the Carrieton District Council offices.

Johnburg
The road from Carrieton to Johnburg is pleasant and scenic. Johnburg is a fascinating example of a town that died. It was named after Major John Jervois the second son of the South Australian Governor Jervois (1877-1883) and proclaimed in 1879. This was a period of good seasons and settlement occurred immediately. Unfortunately the season of 1879-1880 was followed immediately in 1880-1881 by drought and the town was decimated. Johnburg, lies some 40 km north of Goyders Line (the measure of land suitable for agriculture) and over the 100 years it has experienced an average of 272 mm rainfall per annum with 55 of those years being below the average. In periods of drought (one drought lasted for a decade between the 1920s and 1930s) cropping has been impossible and the farmers have been unable to make a living. It is a lesson in the harsh reality and unreliability of desert farming.

* A pastoral lease to Coonatto Station was granted to Alexander Grant in 1853.

* Grant built a stone tank, troughs and a well which provided water for passing teamsters from Burra.

* The government resumed the lease in 1876 and offered smaller blocks to wheat farmers. It called the settlement Yanyarrie Whim.

* Carrieton was surveyed in 1879. At the time the area was characterised by extensive stands of timber and native scrub which included native pine, black oak and mallee. Lots were sold for £2/10/-.

* In 1881 the railway from Orroroo to Quorn opened Carrieton to traffic and this saw the area prosper.

* The Carrieton Public School opened in 1882.

* By 1885 the town had a population of around 120 people. The railway station was opened that year.

* In 1888 the town was renamed Carrieton. It had been known as Yanyarrie Whim.

* By 1968 the area has been so sparsely populated that it has been unable to field either a football or a cricket team.

* The railway closed in 1970 and slowly the facilities - there were three churches - started to close.

* The Carrieton Rural School closed in 1997.

There is a simple local website. Check out http://www.carrieton.com.au. 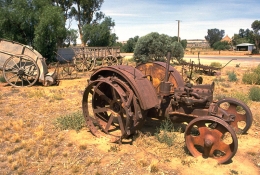 Historic machinery outside the hotel in Carrieton 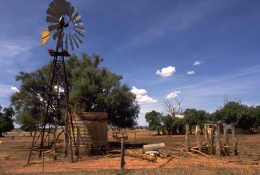 A derelict House at Johnburg