Historic village famed for the beautiful The Drip

Cassilis is a small, historic village lying between Merriwa and Dunedoo. It spreads out on land beside the Munmurra River and is now little more than a few residences, a hotel, two churches and a sandstone Police Station. The main appeal of the area is the beautiful feature known rather unromantically as "The Drip" where clear spring water breaks through a sandstone cliff and "drips" into the Goulburn River.

Cassilis is located 351 km north-west from Sydney either via the Blue Mountains and Mudgee or via the M1 and Merriwa.

It is believed that Cassilis takes its name from a small village in Scotland. In the 1830s it was a private village named Dalkeith which served the Cassilis and Dalkeith stations. The former property was granted to Alexander Busby in 1835 and the latter to Donald McIntyre in 1834. It is claimed that Alexander Busby's wife was the daughter of the Earl of Cassilis in Scotland. The village became a stopover for coaches bound west from Muswellbrook. It was gazetted as a town and named Cassilis in 1869.

Heritage Buildings
The village is spread out with the church on one side of the Munmurra River and the Court House, Police Station and Royal Hotel stretched along Branksome Street which winds and becomes Buccleugh Street.

Police Station and Official Residence
Located in Branksome Street, as the visitor enters the village, is the modest Court House which was designed by Alexander Dawson and built of sandstone in 1858. The police residence, designed by Walter Vernon, the Government Architect, dates from 1891. It is listed on the State Heritage Register (see http://www.environment.nsw.gov.au/heritageapp/ViewHeritageItemDetails.aspx?ID=4180127) which notes of the combined buildings "The Cassilis Police Station & Residence are a pair of striking sandstone buildings, that are important elements in the streetscape of Cassilis, forming the principal civic element in the town. These buildings have a long and continuous association with the provision of Police services in the local area."

Doctor's Residence
Branksome Street bends to the left, becoming Buccleugh Street. On the right - one of the few elegant buildings in the village - is an attractive timber house dating from the late 19th century when it was the residence of the local doctor.

Royal Hotel
Located prominently in Buccleugh Street is the Royal Hotel which was built of sandstone in 1869. It is still a prominent landmark in the town.

Hands on the Rock
Located 10 km south-west of Cassilis, the Ulan/Mudgee Road heads south off the Golden Highway. About 20 km along this road take the sign posted right hand turn onto a dirt road. After 100 m turn right into a small clearing and a 400 metre walking track starts from the far side. It leads to overhanging rocks where there are important historic Aboriginal hand stencils.

The Drip
It is not easy to find but it is hugely rewarding. Follow these instructions carefully: Drive south on the road to Ulan and 2.3 km beyond the Hands on the Rock turnoff, just before you reach the Goulburn River, there is a sign posted turnoff to the left which leads to a car park. There is a walking track which begins on the northern side of the parking area and follows a cliff face adjacent to the Goulburn River. Follow the rock face and you will cross a small bridge, a tumble of rocks and the Curra Creek. Walk through the ferny glade then you will pass by a large rock to the right. To the left there are rock orchids and ferns on the cliff face. The track then heads around to the sandy riverbank. A sign indicates a left turn back to the honeycombed cliff face which you follow to the end. Cross over the grassy bank and a sharp left brings you to the Drip where the river flows over a rock platform.
There is an excellent description of the location at http://www.mudgeebusiness.com/the-drip---ulan.html which includes such useful information as "water runs down the surrounding hillsides and seeps through the high rock gorges and drips into the pools below". The result, as the name suggests, is a cliff that drips into the river. It is particularly beautiful because the place where the seepage occurs is covered with weeping ferns and grasses.
The track is relatively flat and easy. It is a 2.4 km return walk where you have to cross the river a number of times and dodge everything from overhangs to wombat holes and rock caves. There is rarely anyone there. It is a genuine bush paradise.

* Cassilis began life as a private village named Dalkeith in the 1830s. The property had been granted to Donald McIntyre in 1834.

* In the 1890s Jimmy Governor worked as a police tracker at Cassilis just prior to taking up a job at Breelong where he infamously went on a killing spree which resulted in the deaths of twelve people. Governor lived behind the police station when he worked in the town.

* In 1895 the first edition of the Merriwa and Cassilis Standard was published.

There is no visitor information in Cassilis. For information contact the Merriwa Visitor Information Centre, 34 Vennacher Street, tel: (02) 6521 7046.

There is no accommodation in Cassilis.

There is no dedicated website for Cassilis. For information about The Drip, check out http://www.mudgeebusiness.com/the-drip---ulan.html. 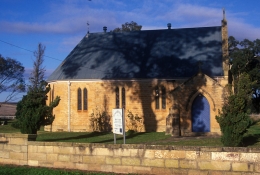 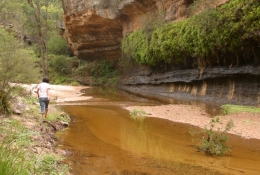 The track beside The Drip involves wading through the Goulburn River 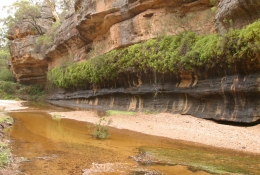 The Drip - a hidden gem