Catherine Hill Bay is a protected heritage mining village within the Lake Macquarie City Council. It proudly declares itself the oldest group of buildings (the miner's cottages date from the 1870s) in the area between the New South Wales Central Coast and Greater Newcastle.
It is a strangely fascinating mixture of industry and beautiful coastline with an excellent surfing beach, an impressive (although now collapsing) jetty (built to carry coal out to ships waiting off the coast) and a working class simplicity. The location is attractive. There is a valley surrounded by high hills and the shoreline in pristine. In recent times a huge 700-block development has taken place on the southern side of the town. The one small consolation is that it cannot be seen if the visitor enters from the north via Middle Camp. The charm of the heritage listed township remains ... albeit just a few streets and a hill away from modern suburbia.

Catherine Hill Bay is located 133 km north of Sydney via the M1 and the Pacific Highway.

The village is named after the schooner Catherine Hill which ran aground near the present town on 21 June, 1867.

Middle Camp
When you take the turnoff from the Pacific Highway to Catherine Hill Bay you will travel only 1.5 km before you reach a residential area known as Middle Camp which is situated in a gully surrounded by high hills. Lining the roadside are rows of early 20th century miners' cottages, some of them now available as rental accommodation. They are essentially simple, box-like rectangles with verandas, all situated very close to the street. This settlement was created in 1910 halfway between Mine Camp and Catherine Hill Bay. It was known as Middle Camp.

Northwood Road Lookout
When the visitor leaves Middle Camp and drives on towards Catherine Hill Bay the road climbs a low hill and there is a left turn into Northwood Road which runs to the town's cemetery. A very rough side road, just before the cemetery, leads to a low headland which offers views down Catherine Hill Bay Beach to the slowly decaying coal-loading wharf at the southern end of the beach.

The Town and the New Development
The town (now Heritage Listed) is located on Clarke Street and is a charming collection of beautifully preserved timber miner's cottages. Beyond the town, just over the hill, is the new 700 block housing estate in which modern suburbia sprawls across previous bushland and extends down to a quiet beach (Middle Camp Beach) which was once popular with surfers. If you want to find out about the new development check out http://catherinehillbay.com.au. The development has been called Beaches. There is an excellent aerial view at http://beacheschb.com.au/wp/wp-content/uploads/2014/10/beaches_buying_550_v3.jpg.

Munmorah State Conservation Area
Immediately to the south is Munmorah State Conservation Area, one of those hidden coastal delights which offers peace, quietness, few crowds and lots of opportunities to experience unspoilt beaches, dramatically beautiful headlands and a coastline unsullied by commercial development. There are two entry points: Birdie Beach Drive off Elizabeth Bay Drive and Blue Wren Drive off the Pacific Highway. This is a National Park and there is an entrance fee.
The park stretches across 1500 ha of coastal land, is edged at the southern end by the shore of Lake Munmorah and offers a range of activities including cycling, sailing, fishing, surfing, bushwalking and picnicking in wetlands, forests, woodlands, littoral rainforests and heath communities.
There are three main walks in the park as described by the Visitor Guide.

Melaleuca Track / Birdie Creek and Coast Tracks (7.2 km one way - medium) - As the brochure explains "This walk can be completed in several sections. Commencing at the southern park entrance on Birdie Beach Drive, this track travels through a swamp / sedgeland paperbark forest, on to a dry ridge scribbly gum community and out onto a spectacular coastal heath. Take in views of Norah Head and Bird Island before a short walk to conclude at Frazer Beach."
For visitors who want to explore the park by driving there are a number of excellent vantage points:
Snapper Point and Frazer Beach
Accessible via Campbell Drive, both Frazer Beach and Snapper Point are not only delightful but also dramatic. Frazer Beach is known as a very good surfing location and Snapper Point offers rock fishing, fine views across Frazer Beach and, just to the north, an indentation in the coastal cliffs where it is easy to see how the geology of the area is a result of sedimentation deposited by a river which used to run from the mountains in the west and which had its estuary at this location
Wybung Head and Wybung Trig Lookout
Along Wybung Head Road is Wybung Trig Lookout, one of the finest views to be found on the entire Central Coast. It looks south over Bird Island to Norah Head Lighthouse, south-west over Lake Munmorah, Budgewoi, Budgewoi Lake and Munmorah Power Station, west to Chain Valley Bay and beyond to the mountains, north-west over Lake Macquarie to the stacks of Eraring Power Station and north to the ships in Newcastle Harbour and beyond to Stockton Beach. There is a track, the Geebung Heath Track, which leads down to Birdie Beach
At the end of Wybung Head Road is a car park looking down on Wybung Head. The dramatic rock forms on the Head are the product of warping, erosion and ruptures of a surface formed in part by the sedimentation deposited by a river which used to run from the mountains in the west and which had its estuary at this location. Walk down to the spectacular headland where fishing is popular from the rock platforms and there are good views southward over Birdie Beach. In spring Munmorah State Recreation Area is alive with dramatically beautiful wildflower displays.
There is a downloadable brochure which contains information about walking, camping and rock fishing in the Conservation Area. Check out http://www.nationalparks.nsw.gov.au/~/media/visitor/files/PDF/Brochures/munmorah-sca-pdf.aspx.

* In 1770 Captain James Cook sailed past Catherine Hill Bay on his journey of exploration up the east coast of Australia.

* In 1800 Captain William Reid became the first European to explore the shores of Lake Macquarie. He had been sent from Sydney to collect coal from the mouth of the Hunter River. He mistook the channel into Lake Macquarie (which lies to the north of Catherine Hill Bay) for the river estuary. Members of the Awabakal tribe directed him to some coal in the headland. When he returned to Sydney he realised that he had reached the lake and not the mouth of the Hunter River. The lake became known as Reid's Mistake until 1826 when it was renamed in honour of Governor Lachlan Macquarie.

* In 1865 four portions of land were sold. They were the site of the current town.

* The village is named after the Catherine Hill, a schooner wrecked near the town in 1867.

* Coal was discovered and mined by the New Wallsend Company. They bought up the land, built a jetty and opened the mine in 1873. The coastal location facilitated shipment and avoided the bar at the entrance to Lake Macquarie. The enterprise employed 70-100 men, whose cottages, still lining the roadside, formed the basis of the  township. Approximately 1000 tons of coal a week was taken by horse-drawn skips from the mine to a loading chute on the jetty.

* The mail was initially shipped in by the company's coal steamer, the Susannah Cuthbert. It was wrecked in 1875. Without a coal steamer the company collapsed.

* Coal operations closed in 1877 and the township virtually ceased to exist.

* In 1888 the land was purchased by the Wallarah Coal Company.

* The Wallarah Coal Company reopened  the mines in 1889.

* In the 1890s a town was created 4 km from the original town and closer to the mine. It was known as Mine Camp.

* Coal miners from Catherine Bay travelled to work via train and a ferry across the lake to Cam's Wharf. They then walked the remaining 4 or 5 km.

* By 1910 another settlement halfway between Mine Camp and the town began to develop. It was known as Middle Camp.

* In 1931 a bus service to Broadmeadow began to operate.

* In 2004 the Lake Macquarie City Council protected the village and the surrounding bush and heathland by declaring it a Heritage Conservation Area.

* In 2006 the NSW Planning Minister, Frank Sartor, “changed the rules” of the past quarter century. The Strategy opened the way for developments which would increase the size of the Bay village by 10 times – from about 100 cottages to 1000 dwellings. The conservation zonings introduced at the behest of the State Government by the two local councils, Lake Macquarie City Council and Wyong Shire Council, were to be ignored in any consideration of future development.

* In 2012 Coal and Allied were granted approval for "proposed new housing by a further 222 housing lots. Last year 550 new lots were approved for the Rose Group development at the southern end of Catherine Hill Bay. Now housing at Catherine Hill Bay which currently consists of 100 houses has increased by 772." See http://catherinehillbay.org.au/save-the-bay/ for more details.

There is an excellent local website. Check out http://catherinehillbay.org.au. It is committed to saving the heritage area and has lots of information about the activists and the development of the town. 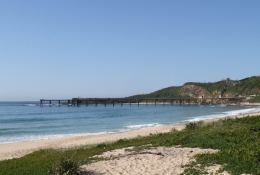 The coal loading jetty which is slowly collapsing at Catherine Hill Bay. 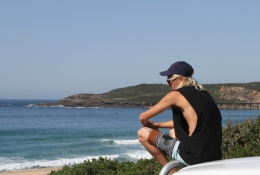 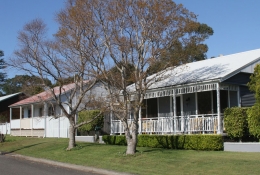 Charming and beautifully preserved miner's cottages from around 1910 at Middle Camp. 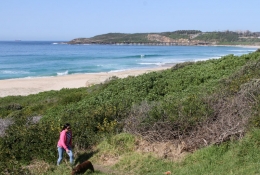 The view from the cemetery lookout at the northern end of Catherine Hill Bay beach. 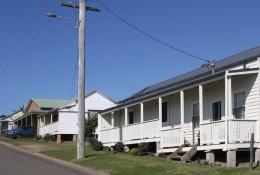 The miner's cottages in the main street of Catherine Hill Bay. 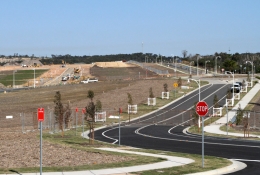 The "Beaches" suburban development over the hill from Catherine Hill Bay. 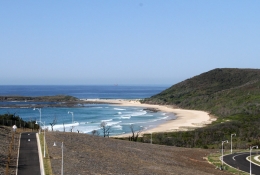 The views from the premium blocks at Catherine Hill Bay.