Historically significant small settlement on the banks of the Hawkesbury River

As Sydney has spread to the west places like Cattai, which were originally little more than a few properties on the banks of the Hawkesbury River, have become outer suburbs. What separates Cattai from other outer suburbs is the simple fact that the land that is now the Cattai National Park was granted to a Dr Thomas Arndell in 1804 and remained in the family until it was acquired by the New South Wales government in 1981. This means that today the Cattai National Park is a beautiful stretch of land beside the Hawkesbury River with a very historic house and broad parklands which are ideal for family picnics and gatherings.

Cattai National Park is located 15 km from Windsor and 56 km north-west of Sydney.

It is likely that "Cattai" is not an Aboriginal word but rather a corruption of "Caddie" which was the name given to the property by Dr Thomas Arndell. Arndell named his property 'Caddie Park' and it remained in the Arndell family for seven generations until 1981.

Cattai National Park
Originally known as the Cattai State Recreation Park, the Cattai National Park (it changed its name in 1992) was officially opened on Australia Day 1983. The park covers 424 ha park on the banks of the Hawkesbury River which provides family facilities - barbecues, picnic sites, camping, showers and toilets - in a peaceful and attractive setting. The park includes a 'convict lagoon', excellent walking and bicycling tracks and the historic 'Caddie Park' homestead. The Park's Plan of Management notes: "Cattai National Park is historically very significant because it retains intact a land grant to a First Fleet settler, which may well be unique, especially as the grant remained in the original family’s ownership until its transfer to National Parks and Wildlife Service almost 180 years later; the landscape has well-preserved evidence of European farming and changed land use over that period; and both the former Caddie Park and Hope Farm have a high potential for investigation of a profusion of archaeological remains.

"The Cattai Homestead, which was constructed around 1820, and its curtilage is listed by the National Trust and the Australian Heritage Commission. The Hope Farm Mill on Hope Farm, which is also listed on the Register of the National Estate, was probably constructed around 1806 and is believed to be the oldest industrial site in Australia. The former 'Caddie' property is also of cultural significance in that it demonstrates the long continuity of human occupation of the area with evidence of Aboriginal habitation and Aboriginal/European contact.
"The national park also contains important natural resources, including rainforest, tall forest and wetland communities which were once more common on the Cumberland Plain and are now limited in extent. It is an important wildlife refuge.
"Recreational use of Cattai Park dates from 1952, when the Arndell family opened their property to the public for camping, water-skiing and other activities. Mitchell Park has a long history as a popular picnic and passive recreation area in western Sydney." For more information check out the downloadable report  http://www.environment.nsw.gov.au/resources/parks/pomFinalCattai.pdf.
Today this truly historic property has been well preserved and is used for camping, school excursions (the park is rich in Aboriginal culture and also retains untouched remnants of the original riverine rainforest which dominated the area before European settlement) and, most importantly, for family gatherings. The National Parks and Wildlife hire out the shelter sheds (which have seating for 30 people) along the riverbank and the area is an ideal parkland for games and activities. The park is also home to small communities of wallabies, possums, kangaroos and the ubiquitous brown and red-bellied black snakes.

Caddie Park
The historic centrepiece of the park is "Caddie Park", a simple but elegant sandstock homestead which was built by convicts in 1821. Assistant Surgeon, Dr Thomas Arndell, (he travelled out to Australia on the First Fleet) located it so it had sweeping views down to the Hawkesbury River. It is notable for its three dormer windows. The east wing is an addition which occurred as recently as 1938. The additions were designed by the architect Bruce Dellit. The house is well worth visiting.

The Original Homestead
Located 60 metres north of the "Caddie Park" homestead are the remnants of the original home. There is evidence of the stone foundations of a tiny dwelling which was no more than 3m x 12m. It is believed this original homestead dates from 1799 when it was built by convict labour.

* Prior to the arrival of Europeans in the valley the district was the home of the Dharug Aborigines who had lived in the area for over 20,000 years.

* By 1794 settlers had moved into the area because of the richness of the alluvial soil.  Grain and other crops were being grown for the colony at Sydney Town which was suffering acute food shortages. The farmers provided Sydney Town with almost half its food supply.

* There is some evidence that Dr T. Arndell built a house in the district as early as 1799.

* In 1804 Dr. T. Arndell (an assistant surgeon on the First Fleet and one-time Superintendent of Parramatta Hospital) was granted an additional 600 acres.

* Arndell named his property 'Caddie Park' and it remained in the Arndell family for seven generations.

* In 1806 a major flood affected the cereal crops and livestock along the Hawkesbury.

* Caddie Park, a handsome sandstone stone structure was built by convicts in 1821.

* In 1938 the architect Bruce Dellit made a series of additions to Caddie Park.

* In 1952 the Arndell family opened up the area for camping, bushwalking and picnics.

* In 1981 Caddie Park and the land surrounding it was acquired by the NSW State Government and became part of the Cattai National Park. 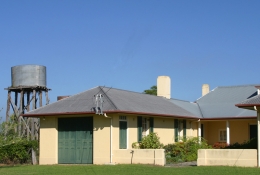 Caddie Park dating from 1821 but modernised a number of times. 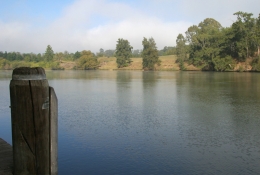