Rural service town which describes itself as the 'Friendliest town on the Downs'.

Cecil Plains is a small rural centre surrounded by the impossibly rich, black soils of the  Darling Downs. Originally used for raising cattle and sheep, the land, since the 1960s, has become hugely productive as the area turned its attentions to cotton production. It is now one of the richest cotton-producing areas in the southern hemisphere.

Cecil Plains is located 222 km west of Brisbane and 78 km west of Toowoomba.

The famous English family, the Cecils, give their name to the town. In 1841 a 22-year old Henry Stuart Russell laid claim to a property he called Cecil Plain Station. He named it after his mother's aristocratic family - the Cecils. His mother's name was Cecil Charlotte Pemberton.

Cecil Plains Homestead
Cecil Plains Homestead is located at the eastern end of town. The original homestead was built on Cecil Plains Station after Henry Stuart Russell and his brother claimed land on both sides of the Condamine River in 1841.The homestead was originally a single slab cottage built by Henry and his brother Sydenham. Ludwig Leichhardt often visited the homestead. Leichhard recorded on 3 December 1847 that 'the rainy weather at this time of year is unusual but Mr Russell told me that he had witnessed a flood of the Condamine some years ago." James Taylor bought the property in 1859.  The history of the station is recorded on a plaque at the entrance.

The Old Station Cemetery
The town's most fascinating historic artefact is the Old Station Cemetery which is located at the corner of Cheetham Street and the Dalby - Cecil Plains Road. It is a small collection of graves (some nothing more than slabs of timber) but it has been well preserved and pieces of timber have been erected around an iron-bark tree which give details of the lives of the people buried in the small cemetery.

"Willie Roser - drowned November 13 1910. Aged 13 years 11 months. He was a rouseabout at the shearing shed located near the lagoon on the opposite side of the river to the homestead. He got into difficulties while duck hunting on the river." is a typically rich and detailed entry.

Historic Victory Hotel
There were two attempts to establish a pub in the town and both were rejected by teetotallers. The handsome pub in the main street started life in 1932 as a boarding house and it wasn't until 1938 (the third attempt) it managed to obtain its licence - not surprisingly it was named “Victory”.

* In 1841 Henry Stuart Russell, a wealthy 22-year-old member of the English upper class, arrived in the district with his brother Sydenham, and laid claim to land on both sides of the Condamine River which he subsequently called Cecil Plains Station. At the time Sydenham wrote home saying "and Mother, we have named the run after you." The Cecils were a prominent Tory family who could trace their lineage back to the sixteenth century.

* It has been suggested that Russell simply took his best horse, walked it for a mile on either side of the Condamine River and laid claim to the land which obviously had a permanent and reliable water course. The run stretched down the river from Yandilla to Jondaryan. Russell stocked the land with cattle and quickly established himself as a successful grazier.

* Ludwig Leichhardt used Cecil Plains in 1844 and 1847 as a base for botanical expeditions into the surrounding district.

* In 1848 Henry Stuart Russell left Cecil Plains but not before he had formed a partnership with James Taylor. Taylor bought the property from Russell and, although there was a severe drought in 1856, he prospered. By the 1890s Cecil Plains station covered 130,000 acres and although the soil was sufficiently fertile for cultivation, he moved from cattle to sheep and made his fortune. t

* In 1916 the Queensland Government bought the station for £2 an acre. It was surveyed and opened for selection in 1919. It was subdivided into 185 portions, of which 75 were set aside for the Soldier Settlement Scheme. The vast majority of the new arrivals had no experience of farming and they lived lives of poverty making a little money from dairy and wheat farming.

* The railway arrived in 1919. It carried cream to Oakey Factory and brought goods and provisions to the town. A post office was established at the railway station in 1921 and it became a major social event to 'meet the train'. The town was proclaimed in 1924 by which time there were 500 people in the district.

* There was a wowserish element to the community. Twice an attempt to establish a pub was rejected by teetotallers. It wasn't until 1938 that the town got its first pub and, not surprisiingly, it was named 'Victory'. It still stands in the main street today.

* In the mid-1960s, the district turned its attention to cotton growing. The Cecil Plains Cotton Gin (it is not open to the public) is a huge operation and between April and July there is a constant stream of trucks through the town. The sides of the roads turn snow white with cotton balls which have fallen off trucks.

There is no Visitor Information Centre in the town but there is an excellent map, with all the major attractions clearly identified, in the Henry Stuart Russell park over the road from the Victory Hotel.

The University of Queensland website - http://queenslandplaces.com.au/cecil-plains - has detailed historical information on Cecil Plains. There is a local site - http://www.millmerran.net.au/pdfdocuments/overviewcecilplains.pdf - which is useful. 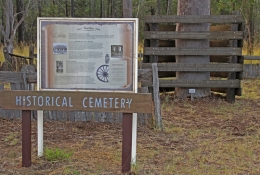 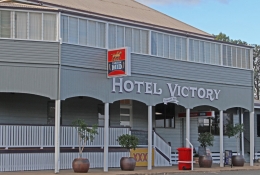 The historic Victory Hotel (1932) which didn't obtain its liquor licence until 1938. 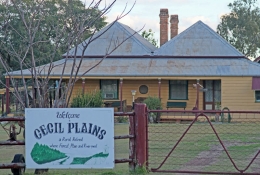