Idyllic town off 1890s timber shops and dwellings in the South Coast hinterland.

Central Tilba and Tilba Tilba are two tiny timber towns in the hinterland behind the New South Wales far South Coast. They are located in the shadow of the once-active volcano which the local Yuin people called Gulaga and Captain James Cook named Mount Dromedary. For the past thirty years Central Tilba, the larger of the two towns, has slowly evolved from a small dairy town with a cheese factory into a fashionable destination with boutique accommodation and a wide variety of gift shoppes and cafes. Once owned by the Bate family (Jeff Bate was a local politician who achieved fame by marrying Prime Minister Harold Holt's widow, Zara) the villages are widely recognised as two of the most attractive hinterland towns in the area.

It is accepted that Tilba Tilba is a Yuin Aboriginal word probably meaning "many waters".

Central Tilba
The entire town, which has been classified by the National Trust, is the main attraction. Realistically it is a single street. By an accident of history most of the houses were built in the 1890s when there was a minor goldrush in the area. When the gold declined, the town remained in a charming timewarp. The main street has been well maintained with the timber exteriors being painted and the interiors turned into gift shops, cafes and coffee lounges. Give yourself a couple of hours to enjoy the ambience of this tiny village which has been held in aspic ... with some very pleasant modern additions.

The ABC Cheese Factory
Located at 37 Bate Street (and established in 1891 by Samuel Bate and others) the ABC Cheese Factory has recently returned to local ownership and now offers visitors the opportunity to watch cheese making and milk bottling through glass windows (for health and safety reasons) and to purchase honey, taste the cheeses and drink milkshakes made from the milk of the local herd of Jersey cows. Their range of cheeses includes specialist cheddars as well as camembert, havarti, Romano and cream blue as well as a feisty cheese called Firecracker. The factory is open from 9.00 am - 5.00 pm seven days a week. Tel: (02) 4473 7387 or check out http://www.southcoastcheese.com.au.

Foxglove Gardens
Foxglove Gardens are located at 282 Corkhill Drive and are open seven days a week. The appeal of the gardens is that they have been planted so that they are in bloom throughout the year. In spring the gardens are alive with lillies, camellias, bluebells and cherry blossoms; in summer, as the owners explain, the gardens feature "Roses along with Buddleia, Delphiniums, Dahlias, Hydrangeas and Salvias. The summer months also see an abundance of fruit, with oranges, grapefruit, limes and lemons still on the trees, the apple, pear, fig, plum, tamarillo and pomegranate start to ripen. With this come the possums, parrots and bats"; in autumn the roses and camellias are set against the autumnal colours of the changing plants; and in winter there is "the perfume of winter sweet, viburnum fragrans and Daphne, the soft colours of Helleborus niger, Magnolias and snowdrop." The a 100-year-old cottage is surrounded by three-and-a-half acres (1.4 ha) of fragrant gardens which are open from 9.00 am - 5.00 pm daily. For more information tel: (02) 4473 7375 or check out http://www.thefoxglovegardens.com.

Bushwalking and Climbing Gulaga
There are walking tracks from both Central Tilba and Tilba Tilba (the main track starts behind Pam's General Store in Tilba Tilba) to the top of Gulaga (Mount Dromedary). The walk, for those who are fit, takes about half a day.

Gulaga was formally handed over to the Yuin people in 2006 and is jointly owned and managed by National Parks and the local Yuin community. Historically there was a sign near the summit which explained: "Mount Dromedary is known as Gulaga to the Aboriginal people. The Wombara or Black Duck totem of the Yuin tribe enjoy a special relationship with Gulaga as their place of origin, as a traditional place of water and  food, as the home of their ancestors, as a teaching and initiation site for both men and women. Due to its elevation and fertile soils the mountain also supports a wide range of plants and animals. Many of these species, especially in the rainforest, are at the southern limit of their distribution."

The mountain which is a remnant of a volcano which was 3,000 metres high 60 million years ago, was sighted by Captain James Cook in 1770 and named Mount Dromedary because he thought it looked like a camel. Today it is a little over 1,000 metres high and is seen by the Yuin as a symbol of motherhood. The walk to the summit has a number of steep sections but the view (albeit through the trees) is impressive and the unusual granite formations have a strange, and easily identifiable, spirituality. The journey up the mountain passes through rainforest, beside waterfalls and passes old mine workings.

* Prior to the arrival of Europeans the area around the Tilbas had been occupied by the Yuin Aboriginal people who saw Gulaga (Mount Dromedary) as a place of great spiritual importance. They had been in the area for at least 20,000 years.

* In April, 1770 Captain James Cook sailed up the coast and named Cape Dromedary recording in his journal: "At 6 o'clock we were a breast of a pretty high mountain laying near the shore which on account of its figure I named Mt Dromedary ... The shore under the foot of this Mountain forms a point which I have named Cape of Dromedary."

* By the early 1820s the area was being settled by Europeans. It is accepted that Captain Thomas Raine was probably the first settler near Gulaga Mountain.

* By the late 1830s a stockman named John Jauncey had established a run east of where Cobargo is located.

* Around the early 1840s Peter Imlay, one of the well-known Imlay Brothers who owned extensive holdings in the area, bought land around Cobargo.

* By 1860 reef gold had been discovered and prospectors rushed to the district. The Dromedary Gold Mining Company continued small operations until the early 1900s.

* Henry Bate took up land on the slopes of Gulaga in 1864. He built Mountain View homestead.

* In 1873 Richard Bate established a post office and a small number of miners built houses in the villages.

* In 1891 Samuel Bate became one of the founders of the A.B.C. Cheese Factory in Central Tilba.

* Bate's General Store was opened at Central Tilba in 1894.

* In 1895 Samuel Bate subdivided his land and sold smaller lots which led to the creation of Central Tilba. The site was to become central for the workers at the Dromedary Gold Mines. The two-storey Mt Dromedary Hotel was one of the first buildings to be erected.

* Most of the town's timber buildings were erected in the 1890s.

* In 1907 the Methodist Church was built on land provided by Samuel Bate.

* Today the entire village is classified by the National Trust as the Central Tilba Conservation Area.

* In 1969 the town and district achieved a brief moment of fame when the local politician, Jeff Bate, married Dame Zara Holt, the widow of Prime Minister Harold Holt.

There is a local commercial website - http://www.tilba.com.au - which provides information on accommodation, shopping and eating in the area. 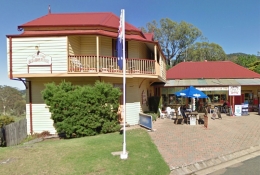 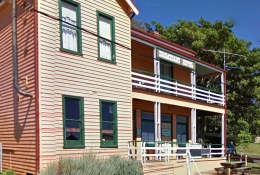 The Mount Dromedary Hotel built in the late 1890s. 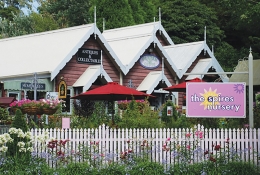 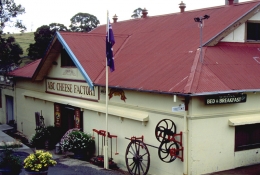 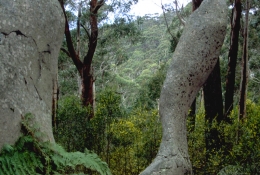 The strange granite shapes on the top of Gulaga (Mount Dromedary)