Coastal town famed for its lobster factory and the impressive Pinnacles

Cervantes is a small, modern fishing village and holiday destination where the major attractions include The Pinnacles, one of the great geological attractions in the country, and a huge rock lobster processing plant which offers both cruises and an opportunity to have a lunch featuring their product. It is a town in transition. While there are still many 1960s holiday houses built of fibro and permalum and catering for enthusiastic fishermen, there are also large, two storey modern houses designed for family holidays and retirement. It was as recently as 1962 that the government removed 505 hectares from the northwest corner of the Nambung National Park to establish a town. The result was Cervantes which is now an easy trip north from Perth.

Cervantes is located 198 km north of Perth via Joondalup and Lancelin.

Cervantes takes its name from an American whaling ship which was wrecked off the coast in 1844. Apparently the Cervantes was anchored off Thirsty Point, the promontory which lies to the west of the town and separates Nambung Bay from Ronsard Bay, when the ship was blown ashore on an island to the south of the point. The island was named Cervantes and, in 1963, it was given to the township which grew on the mainland. Amusingly some locals thought the town had been named after the Spanish author of Don Quixote and consequently many of the streets in the town have been given Spanish names.

The Pinnacles
The Pinnacles are one of the natural wonders of Australia. These strange, much photographed, limestone pillars are unique. They have the quality of a moonscape and, without geological understanding, seem completely otherworldly.
The first Europeans to discover them were Major Logue and his stockmen in 1849. They had camped near the Nambung River and during the night their cattle strayed. While searching for the cattle the next morning the stockmen came across the Pinnacle Desert.
Cervantes is recognised as the major access point to the Pinnacles. It is located 20 km north of the Pinnacles Desert Discovery Centre. The journey is through typical coastal scrubland (huge white sand dunes separate the road from the coast - this is an excellent opportunity to inspect the dunes and visit the incredibly white beaches - there are turnoffs to Kangaroo Point and Hangover Bay).
The Pinnacles Desert Discovery Centre explains, through displays, soundscapes, videos and images, the geology of the area and how the pinnacles were formed. There is a Pinnacles View Lookout over the entire site and a Desert View Trail which is an easy 1.5 km and allows visitors to get up close to these strange and magical formations. Check out https://parks.dpaw.wa.gov.au/site/pinnacles-desert-discovery-centre for more details.

How did the pinnacles form?
The coast of Western Australia, stretching from Shark Bay south to Albany, has a near continuous belt of tamala limestone or aerolian calcarenite - ie. wind blown calcium carbonate - which has been created by the combination of wind, rain and the cementing agent of calcium.
A set of rare circumstances produced the pinnacles. Firstly the huge sand dunes stabilised. The rains which fell on the dunes leached down through the sand carrying the calcium. This resulted in the lower levels of the dune solidifying into a soft limestone. As this stabilisation occurred a layer of soil formed on top of the dune which allowed plants to grow and further cemented the limestone below. Gradually the lowest layer of soil, which lay between the surface and the limestone, formed into a hard cap which resulted in the old dunes having three levels - a soil and plant level near the surface, a hard cap below the surface, and a thick layer of soft limestone at the bottom of the dune.
Inevitably the roots from the plants on the top level found cracks and broke up the hard cap and the layer of soft limestone. The result was that under a surface covered with plants and soil the pinnacles developed. No one knows for sure how long ago this process occurred. It may have started as long ago as 500,000 years but equally it may only be a few thousand years old and it may still be continuing today. The Western Australian Museum has opted for some time in the last 80,000 years.
The advent of drier weather in the region resulted in the top layer of plants and soil being removed and gradually the pinnacles were exposed so that today they stand like strange sentinels on a plain of wind blown sand.

Lobster Shack
Located at 11 Madrid Street, the Lobster Shack offers fishing charters, tours (seal tours of the Cervantes Islands), a lunch menu of lobsters (from 11.00 am - 3.00 pm daily) and tours of their commercial lobster processing factory (12.00 pm - 3.00 pm daily) where they can hold 20 tonnes of lobsters at any one time. For more details check out http://www.lobstershack.com.au.

The Beach Walk
There is a very pleasant walk which starts at the parking lot beside the Caravan Park on Catalonia Street and takes in the jetties, the narrow white beach which seems to always be "sullied" by seaweed, and an interesting memorial to four vessels which were all shipwrecked off the shore. The stories of the Maid of Lincoln (a wooden screw steamer of 32 tonnes built in Port Lincoln in 1885 which was wrecked and sand when she hit a reef south of Hill River); the Duchess of Kent (a 70 foot wooden ketch built in Tasmania in 1875 which was blown onto Cervantes Island during a heavy storm in 1895); the Europa (an Italian 187 foot three masted iron barque which hit Coffin Reef in 1897) and the Villaret (an 82 foot freezer boat which struck a reef, subsequently known as Villaret Reef, 2 km north of Cervantes in 1960) are all recalled on a viewing platform on the sand dunes which offers excellent views up and down the shoreline.

Lake Thetis and the Stromatolites and Thrombolites
Located off Hanson Bay Road to the south-east of the town centre, Lake Thetis is one of the few places (Shark Bay is another one) where stromatolites can be seen. They are rock-like structures which are some of the oldest living creatures on the planet. There is a hilly outcrop in the Pilbara where geologists believe the rocks are 3,500 million years old. These ancient rocks contain fossils of stromatolites which can still be found on the shores of Lake Thetis. To experience this uniquely ancient "growth" there is an easy 1.5 km (30 minutes) walking loop around the lake. Interpretative signage provides information about the fossils, geology ("Dunes on the Move"), flora, fauna ("Watching waterbirds and shorebirds - terns, red-capped plovers, black-winged stilt and common greenshank") and Indigenous culture ("Share the insights of a Yued Aboriginal elder"). The first 300m of boardwalk, which passes the best examples of thrombolites in the lake, is easily accessible. You will find the best examples of stromatolites at the south western edge of the lake. Check out http://www.australiascoralcoast.com/Listing/Lake_Thetis_Thrombolites.

Wildflowers
The area around Cervantes comes alive with spectacular displays of wildflowers between July and October.

How to See WA Wildflowers - A Guide
When planning a trip there are a number of very simple rules.
(1) Start by downloading Your Holiday Guide to Western Australia’s Wildflowers at http://www.westernaustralia.com/en/things_to_do/forest_and_flowers/pages/wawildflowers.aspx#/. It is a comprehensive guide to the wildflowers. There are over 12,000 species and 60% of them are found nowhere else on the planet. The specific section on Cervantes is located on Page 8 of the guide.
(2) There is a tendency to say "But I won't know what I'm looking at" but that is rubbish. There are a number of great books and the best, by far, is the answer to "Wildflowers for Dummies" titled Colour Guide to Spring Wildflowers of Western Australia. It is privately published by Wajon Publishing Company, written by Eddie Wajon, and comes in three volumes – 1. Kalbarri and the Goldfields, 2. Perth and the Southwest and 3. Esperance and the Wheatbelt. They can all be purchased online from Kings Park & Botanic Garden in Perth. Check out https://www.aspectsofkingspark.com.au. The Kalbarri and the Goldfields book is the one most relevant to Cervantes.
(3) The best starting place, if you want to get a good foretaste of what you are about to experience in the wild, is to visit Kings Park & Botanic Garden in the heart of Perth. Apart from offering sensational views over the Swan River and the Perth CBD the gardens boast a 17 hectare area which has more than 1700 native species of wildflowers. This is, not surprisingly, rather pristine and not very wild but it does allow you to develop a working knowledge of devils pins, kangaroo paws, desert peas, everlastings, starflowers, grevilleas, firebush, a range of orchids and hundreds of other natives.
You really don't need to be a flora expert. All you need are your eyes and a sense of wonder because the Western Australian wildflowers in spring really are as remarkable and significant and a unique part of Australia.

* The coastline around Cervantes had been known to Europeans since the 17th century - to Dutch and British sailors.

* In early 1803 two ships - Le Geographe and the Casuarina - sailed up the coast of Western Australia mapping and collecting samples of the local fauna and flora as they progressed.

* Cervantes takes its name from an American whaling ship which was wrecked off the coast in 1844. The Cervantes was anchored off Thirsty Point, the promontory which lies to the west of the town and separates Nambung Bay (to the south) from Ronsard Bay in the north, when a gale blew up and the ship was blown ashore on an island to the south of the point. The ship was not badly damaged but due to difficulty of repairs all the contents were sold on the site.

* The island was named Cervantes after the ship.

* As recently as 1962 the Western Australian government removed 505 ha from the northwest corner of the Nambung National Park to establish a town.

* in 1963, the name Cervantes was given to the small township which developed.

* In 2008 a walkway was established at Lake Thetis.

re is a very useful local website with information about tours, accommodation and activities. Check out http://www.visitpinnaclescountry.com.au/pages/pinnacles-visitor-information-centre. 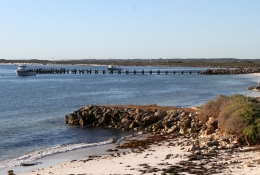 A jetty and the shoreline, with seaweed, at Ronsard Bay at the eastern edge of Cervantes 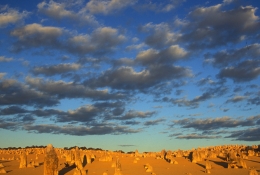 A late afternoon sun over the Pinnacles 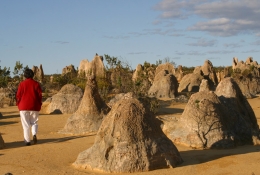 Walking through the Pinnacles 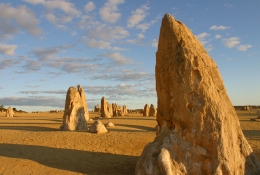 Long shadows formed by the afternoon light at the Pinnacles 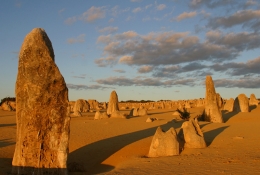 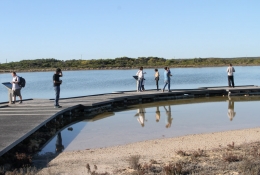 The viewing platform at Lake Thetis 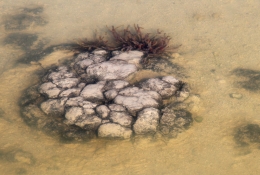 A healthy stromatolites from the viewing platform at Lake Thetis 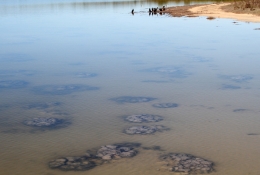 Stromatolites and birdlife at the shoreline in Lake Thetis 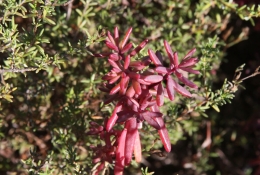 Wildflowers growing on the edge of the path around Lake Thetis 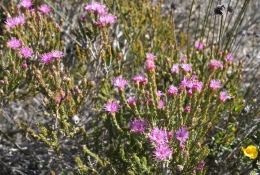 Wildflowers along the road into Cervantes