Mining city at the southern edge of the Hunter Valley.

If the world was ruled by common sense and imagination, Cessnock would be the emotional and economic heart of the great Hunter Valley wine area. It would be a classy city full of chic cafes and restaurants; boutique accommodation and specialist providores catering for the clientele of the 150 vineyards in the district. Instead it is a coal mining town struggling to find a new identity. It is a place of cheap cafes, op shops, bargain basement stores which make it a deeply working class residential area with shops and buildings which recall a time when "coal was king". The town started as a service centre for travellers and the district's farmers. Its real development as a city occurred when the area became a major mining centre at the end of the 19th century.

Cessnock is located 152 km north of Sydney via the M1 freeway. It is situated 107 metres above sea-level.

The name of Cessnock comes from John Campbell, an early settler who was granted 1560 acres along Black Creek in 1826. He named his property after Cessnock Castle in Ayrshire, Scotland, which belonged to his baronial grandfather.
The history of the subsequent naming of the town is complex and confusing. There was a move to establish a village in the area and land was reserved for a church and school north of present-day Cessnock as early as 1829. A village was laid out in 1884-85 and officially described as 'The Village of Pokolbin'. By 1890 it was known as Cessnock but that name was transferred south to the town now called Cessnock in 1908 and the northern village became known by its local name, Nulkaba, which was officially adopted in 1927.

A Walking Tour of Cessnock
There is a useful Walking Trails Guide to Cessnock Local Government Area (it can be downloaded at http://www.samaritans.org.au/wp-content/uploads/2013/05/C_CCHB_WalkingGuidePart1.pdf) which contains maps and information about both Cessnock and Kurri Kurri. On Pages 15-16 it lists a total of 27 places of interest around Cessnock and provides details of a pleasant 3 km, 45 minute walk around the town which, with a few diversions, basically goes along Cumberland Street, down Vincent Street, turns into Cooper Street, then goes along North and South Avenue and returns to the city centre via Wollombi Road. There used to be a detailed guide to the walk which could be purchased from the library but it has not been reprinted. Here is a detailed summary of its contents:

Making Sense of the Hunter Valley
Aussie Towns is a guide to towns and the Hunter Valley wine region is uniquely characterised by not having a central town. It is a series of over 150 vineyards stretching from Cessnock in the south to the New England Highway in the north. There is a dedicated website - http://www.winecountry.com.au - which covers all aspects of the vineyards and the Hunter Valley including accommodation, suitable cellar doors, tours (so you can drink and not drive), restaurants and diverse things to do.

The Brick Beehive Kilns
Located in the grounds of the Potters Hotel Brewery Resort on Wine Country Drive in Nulkaba are two beehive structures which are an unusual part of the history of the Pokolbin area. The first Brickworks were set up by Stephen Arthur Hennery and Mark Robinson on 10 acres. The location was chosen because the local clay deposits were suitable for the making of bricks. The initial business was very simple with wire cut pressed bricks being used in coal mines, houses and public works.
By 1928 a company known as Robinson and Hennery Ltd had been formed and the kilns were being used to produce garden terracotta pots as well as bricks. A new kiln was commissioned from a pottery manufacturer in England. The following year the company changed its name to Cessnock Potteries.
By 1931 Cessnock Council accepted a tender for the salt glazed stoneware pipes for the development of sewerage lines in the area. During this time brick and garden pottery ceased at Cessnock Potteries and public works took over. This expansion continued and sewerage pipes were supplied to Scone, Singleton and Muswellbrook as well as Condobolin and Bourke. During the 1940s renovations where undertaken to convert to electric power and during World War II the company was declared as an essential industry for the war effort. The kilns are Heritage listed. For more information check out http://www.pottershbr.com.au.

Hunter Valley Zoo
Located at 138 Lomas Lane, Nulkaba and open six days a week (closed on Wednesdays) between 9.00 am - 4.00 pm the Hunter Valley Zoo has a mixture of international animals and local favourites including dingoes, Tasmanian devils, wombats, kangaroos, koalas, snakes and birdlife. It currently offers an opportunity to get up close and personal to meerkats, marmosets and Emperor tamarin. There are keeper talks every half hour from 10.00 am starting with dingoes, Malayan tapirs, African lions, Capuchin monkeys, koalas, meerkats, squirrel monkeys and at 3.00 pm the white African lion. For more information check out https://www.huntervalleyzoo.com.au.

Hunter Valley Gardens
Located on Broke Road, Pokolbin (just down from McDonalds Road) the Hunter Valley Gardens are open every day from 9.00 am - 5.00 pm. The huge complex includes a range of specific gardens spread across 60 acres (24 hectares) including The Sunken Garden, the Storybook Garden, the Rose Garden, the Oriental Garden, the Lakes Walk, the Italian Grotto, the Indian Mosaic Garden, the Formal Garden, the Chinese Garden, the Border Garden. On the website the Gardens Creator, Bill Roche, explains:  "Hunter Valley Gardens has many outstanding features including 10 differently themed garden areas with over eight kilometres of pathways, all carefully graded for easy walking. A talented crew of some 40 and at times 50 gardeners worked here week in and week out for over four years constructing the gardens. They were all marvellous people and most had a real love of nature and a joy in creating something of beauty for today and for the generations to come ...
Hunter Valley Gardens aims to provide visitors with a magical experience – a combination of the sounds of water and birds, together with a multitude of fragrances and colour. For many, an exciting and enriching experience, for others one of calm and comfort. I trust we have provided something for everyone." For more detailed information on these remarkable gardens check out http://www.huntervalleygardens.com.au.

Bellbird Mining Disaster Memorial
Located 4 km from Cessnock, on the corner of Wollombi Road and Kendall Street is the Bellbird Mining Disaster Memorial in a small park. This simple monument stands opposite the site of Bellbird Colliery where, on Saturday, September the 1st, 1923, explosions and fires underground killed 21 men and their horses. Another man, John Brown, the manager at Aberdare, died in the rescue attempt. Working conditions at the time were very poor. The unionised workforce had pressed for central rescue stations in the mines but their pleas were ignored. Some did not even have safety lamps. A huge crowd of 25 000 people attended the ensuing mass funeral. Subsequently the Central Mines Rescue Station was formed.
At the time the Western Grazier newspaper reported: "A terrible explosion occurred at the Bellbird Colliery, one of the busiest on the Maitland coalfields, on Saturday last. The disaster occurred in No. 3 section of the mine, shortly after 2 p.m. The death toll totals 21, of whom 15 were brought to the surface by rescuers. There are still six at the bottom of the mine, but all hopes of rescue have been abandoned. A shift comprising 30 men went down at 1 o'clock, and exactly an hour later an employee saw volumes of curling thick black smoke belching forth from the fan-shaft.  He immediately rushed to the engineer's quarters, and in a few moments the news of the fire spread throughout the field, and it was not long before the distracted wives, children and relatives of the entombed miners had reached the tunnelmouth of the mine, and terrible scenes were witnessed as the bodies were brought out of the tunnel. The mine will have to be totally closed down for probably six months, according to local opinion, in order to allow the fires to burn themselves out. Seven hundred men will be thrown out of work. John Brown, manager of the Aberdare colliery, lost his life while carrying out rescue work." For more information check out http://monumentaustralia.org.au/themes/disaster/industrial/display/20293-bellbird-mining-disaster.

* Prior to the arrival of Europeans the Darkinjung lived in the area around Cessnock. The language group was divided between the Wonnarua to the north and the Awabakal to the south. At the time of settlement it was estimated that around 3,000 people were living between the Hawkesbury River and Lake Macquarie. Cessnock is within the boundaries of the Awabakal people.

* By the 1820s settlers had moved into the area. There is evidence of considerable violence against the local people as the settlers advanced into the region.

* John Campbell was granted 1,560 acres in 1826 along Black Creek where the town is now situated. He named the property after Cessnock Castle in Ayrshire, Scotland.

* By 1827 it was estimated there were only 65 Aborigines living in the area.

* The junction where Cessnock now stands became an important camp for teamsters.

* Land was reserved for a church and school north of present-day Cessnock as early as 1829.

* Much of the Campbell property was sold in 1853 enabling the emergence of a private village.

* The Cessnock Inn opened for business in 1856 for those travelling between Wollombi and Maitland.

* Coal was discovered in the district by William Keene in 1856.

* By 1858 there were only eleven adults in the village.

* After the Robertson Land Act of 1861 small landholders began to settle on farms along Black Creek and Anvil Creek to the north and north-west of Cessnock.

* A German winemaker named Bouffier established a vineyard at Cessnock around 1866.

* The town developed as a service centre to local farmers and travellers.

* Wheat-growing declined in the district after rust destroyed the crop in 1870.

* The original slab-construction St Patrick's Catholic Church was completed in 1872.

* Cessnock village was laid out in 1884-85. Officially described as 'The Village of Pokolbin' it became known as Cessnock later in the decade.

* The name was transferred south to the town now called Cessnock in 1908.

* The northern village of Cessnock became known by its local name, Nulkaba and that was officially adopted in 1927.

* The full potential of the Greta coal seam was recognised in 1886 when T.W. Edgeworth David did some exploratory work.

*  The first colliery (Richmond Vale) was opened in 1891 and was linked by rail with Maitland.

* Aberdare Mine was opened in 1905. It was the first Cessnock mine.

* By 1906 the East Greta, Stanford Merthyr, Pelaw Main, Abermain, Aberdare and Hebburn collieries were all in operation.

* By World War I 17 collieries existed on the South Maitland Coal Field, employing nearly 10,000 men and boys and supporting a population of 43,000 in the district.

* On September 1, 1923, 20 men and their horses were killed in an underground explosion and fire at Bellbird Colliery. One of the rescuers, John Brown, the manager at Aberdare, also died.

* In 1929 Norman Brown was shot and killed at Rothbury when police fired their pistols to warn off thousands of miners protesting against scab labour during a lock-out.

* Many mines closed during the Great Depression of the 1930s.

* Mines reopened during World War II. The war was profitable years for the mine-owners although unrest continued over pay and conditions.

* Striking employees were visited by novelist Katherine Susannah Prichard in 1944.

* The pits began to close from the late 1950s and wine slowly supplanted coal as the centrepiece of the local economy.

* The Greater City of Cessnock was declared in 1984. It incorporated 25 formerly separate towns and mining villages.

* Richmond Vale mine was closed in 1967 and it subsequently became a mining museum.

There is a very detailed history of Cessnock on the Council website. Check out https://www.cessnock.nsw.gov.au/community/about-our-region/history. 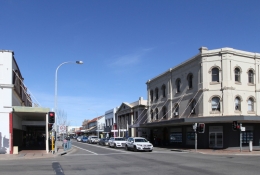 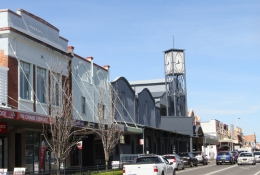 The clock over the Council Chambers in Vincent Street. 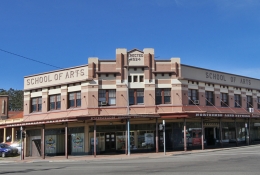 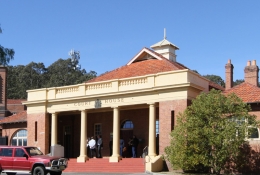 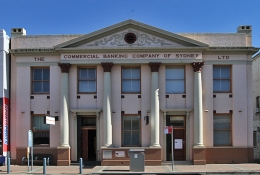 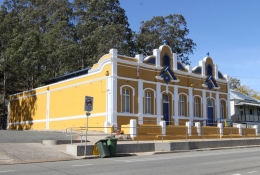 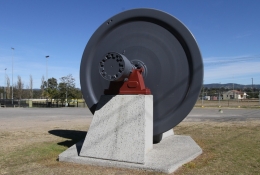 The Aberdare Central Colliery Flywheel beside the road into Cessnock.