Sugar cane service town which has turned itself in a National Trust town.

Childers came into existence as a service town for the surrounding sugar cane fields. Today it combines tourism - the town has a wealth of historic buildings - with a surrounding agriculture of sugar cane, avocadoes and macadamia nuts. The local council successfully capitalised on the tourist traffic by dubbing the town 'Historic Childers - The National Trust Town' and providing opportunities for visitors to explore the region's interesting past. Combined with the age of the unusual Brazilian Leopard Trees which line the main street it has become a magnet for people making the trek north towards Cairns.

Childers is located 311 km north of Brisbane via the Bruce Highway. It is 60 km north west of Maryborough, 54 km south of Bundaberg and 108 m above sea level.

No one is sure why or how Childers got its name. It is true that Childre was the name of a village in Oxfordshire. The area has a number of Oxfordshire names including the Isis River (which runs through the city of Oxford), Abingdon and Didcot. Equally the town may have been named after the Rt Hon Hugh Childers, Auditor-General of Victoria - but he had no apparent connection with the town.

Heritage Walk
There are 23 buildings in Churchill Street that are listed on the Queensland Heritage Register. There is a single A4 sheet available at the Visitor Information Centre which combines a map of the town (most of the historic buildings are located on Churchill Street) with succinct descriptions of the highlights. Of particular interest are:

1: Visitor Centre and Palace Building
The town's Visitor Centre is located in the Palace Building which was destroyed by fire in 2000 and subsequently rebuilt in honour of the 15 backpackers who died in the fire. Upstairs, in the Art Gallery, are two remarkable art works commemorating those who died. One is a remarkable, single piece of glass with the short, personal histories of each of the victims featured through photographs and mementoes and the other is a remarkably evocative and touching painting.

2: Backpacker Memorial
On 23 June, 2000 an itinerant fruit picker, Robert Long, who had a pathological hatred of backpackers and who had recently been removed from the hostel, started a fire in the downstairs recreation room at the Childers Palace Backpackers Hostel which killed a total of 15 backpackers - nine women and six men -  most of whom came from England and Holland. Long was captured and gaoled for life. To honour the dead backpackers, most of whom had been fruit picking around Childers, the town rebuilt the Palace Hotel and a Queensland artist, Sam Di Mauro, constructed a 7.7 metre long glass memorial and artist, Josonia Palaitis, completed an oil painting "Taking a Break in the Field" which depicted all fifteen of the people killed in postures which captured exactly the photographs their families had lent for the painting. It was a traumatic moment in the life of the town.

4. Childers Pharmaceutical Museum
One of Childers most impressive historic shops is the Childers Pharmaceutical Museum located at 90 Churchill Street. It is a specialist museum which was built in 1894 and retains much of the charm of the late nineteenth century. The shop fittings are made from cedar, there are old leather bound prescription books, mortars and pestles that are works of art and a very early cash register dating back to 1906. The shop includes historic dispensary and dental exhibits, the original pharmacy shop front, mineral ingredients, rare specimens, strange potions, specimen jars, medicine bottles. It is open from 9.00 am - 3.00 pm Monday to Friday and 9.00 am - 1.00 pm on Saturday.

7. Olde Butcher Shoppe
Located in North Street, around the corner from the Federal Hotel (1907), is the Olde Butcher Shoppe reputedly the first tiled butcher's shop outside Brisbane when it opened in 1896. In 2016 it was up for sale with locals hoping that it would return to being a showpiece for a traditional butcher. It has lost none of its charm.

Isis Central Sugar Mill
There was a time when it was possible to visit the Isis Central Sugar Mill between July and November but the constraints of insurance and safety have ensured that visitors can only view it from afar. It is a locally owned and a constant feature on the skyline of Childers. The mill's website explains: "With over 115 years experience of growing our business and reputation, we now crush over 1.4 million tonnes in a season and have an annual turnover in excess of $90,000,000. Our products include raw sugar, that we market domestically and export via QSL, molasses and electricity (made from renewable sugarcane bagasse) through our commercial arrangement with AGL.
A move to growing cane in recent years has further integrated our businesses. Our portfolio of farming land exceeds 500 hectares and farming activities are also conducted on over 1500 hectares of leased land." Check out https://www.isissugar.com.au for more information.

Snakes Downunder Reptile Park & Zoo
Located at 51 Lucketts Road, the Snakes Downunder Reptile Park & Zoo displays over 45 species and subspecies of Australian reptiles, amphibians and marsupials. It opens at 9.30 am and during the day has a snake show, reptile handling, a koala talk, a venomous snake show and a crocodile feeding. There are guided tours, a limited number of monitor lizard feedings (Sunday, Tuesday and Thursday) and snake feeding (every Monday). The Park is closed on Wednesday. For more detailed information check out http://www.snakesdownunder.com.

Burrum Coast National Park
Burrum Coast National Park covers 26,055 ha and is characterised by coastal plains and a stranded dune system. Known as the "largest and least disturbed" of Queensland's coastal plains it is ideal for bushwalking, nature photography and bird watching. It has spectacular wildflower displays in the spring and early summer and is home to mangrove-lined riverbanks, wallum heath, tea tree wetlands, eucalypt forests and huge cabbage tree palms. Access by conventional vehicle is very limited and a 4WD is essential.
Rare plant species exist in pockets with deeper soils (including Livistonia palms in the Woodgate section, and, in the Kinkuna section, Melaleuca cheelii and the cycad Macrozamia lomindroides). The estuaries of Coonarr and Theodolite Creek in the north, and the Gregory and Burrum Rivers in the south, are lined with red mangrove communities and the Woodgate section has swamp environs. Birds are plentiful around these waterways in the early morning.
Loggerhead turtles lay their eggs in nests on the beach from November to April. Other fauna in the park includes a wide range of birdlife, such as the migratory rainbow bee-eater, lizards, snakes and noctural mamals such as sugar gliders, feather-tail gliders, bats and marsupial mice.
The park is broken into three "sections":
* Kinkuna
* Woodgate
* Burrum Heads

Kinkuna Section
There are two ways of approaching the Kinkuna Section of Burrum Coast National Park. Both are 4WD only. From Woodgate, head west along the Childers-Woodgate Rd for 3 km then turn right into Woopis Rd and follow the signs to Palm Beach. Or via the Bundaberg-Goodwood Road and Coonarr Road.
The Kikuna Camping Zone and the Theodolite Creek day use area are characterised by species such as beach spinifex, coastal sheoak and the colourful blooms and seeds of climbing guinea flower and coastal jack bean bind the coastal dunes. Immediately behind the dunes are sandy ridges covered by shrublands and low-standing open forests of eucalyptus, vine thickets and wattles. The plains of the hinterland are characterised by shallow soils, out of which grow communities of wallum and heath such as wallum banksia - unusual in Queensland -  tea trees and white mahogany.

Woodgate Section
Located 47 km east of Childers is the seaside resort of Woodgate with its 18 km beach which is ideal for fishing and sailing. It is a retirement village and holiday resort for people wanting to "get away from it all". The Woodgate Section of the park extends from the town south to the Burrum River estuary. Access to the Burrum Point campground is 4WD only, although there is an 800-metre circuit boardwalk through a teatree swamp which departs from Acacia Street (off Sixth Avenue) in Woodgate. Those wanting to see more can take the 5.2 km Banksia Track which starts from the same spot. It passes from the melaleuca wetlands to Livistonia palm forest, to open forest and on to a wallum heath plain where there are spectacular displays of wildflowers from August to October.
Access to the rest of the Woodgate section is via Walkers Point Road which can be approached via Twelfth Avenue in the town of Woodgate.

Burrum River Section
Burrum Point Campground is located along a side track south of Woodgate township. It sits behind the beach and is a popular destination for anglers wanting to fish the nearby river estuary.
Two walking tracks depart from Burrum Point campground. The Melaleuca Track (12.3 km return) passes through wallum heath, mangroves, swamps and saltpans and the Walkers Point Picnic Area before returning to Burrum Point. Birds are abundant in the area.
The Birdhide Walk (5 km return) leads from Burrum Point to a birdhide at the edge of a small lake where waterbirds can be seen in profusion during the cooler parts of the day.
Walkers Point Picnic Area has paved areas and tables. There is a boat ramp into the Burrum River estuary nearby and this is a good spot to launch a canoe.
A 4WD track leads from Walkers Point to Hoppy Larks Creek Day Use Area. There is wheelchair access to a viewing platform with a picnic table and to a fishing platform on the Gregory River.
From Hoppy Larks Creek Day Use Area it is only a short distance to Heidkes Road which leads to the Childers-Woodgate road 8 km from Woodgate.

* Prior to the arrival of Europeans the area was occupied by the Gubbi Gubbi Aboriginal people.

* The area was first explored by Europeans in the 1850s.

* By the 1860s timber cutters were in the area and teamsters were stopping at the small town.

* By 1870 most of the surrounding scrub had been cleared and the town was surrounded by 360 square kilometres of rich agricultural soil.

* By 1885 Childers had been established along the ridge and its main street was a dusty track.

* In 1887 the Childers Council was established and the railway reached the town. It was the railway terminus until 1896.

* The Methodist Church held its first service in 1895.

* Gaydon's Pharmacy opened in 1896. The same year the Court House opened for business.

* The sugar mill at Isis Central started crushing in 1897.

* In 1902 the town was virtually wiped out by a fire which demolished nearly all the buildings on one side of the main street.

* By 1903 there were three banks - the North Queensland, Queensland National and Commercial Bank - operating in the town.

* In 1903 the town held its first agricultural show.

* A violent riot occurred in the town in 1911 involving sugar mill owners, scab labour and unionists.

* In 1912 a silent picture theatre opened in the town.

* A Catholic primary school was opened in 1926.

* Infamously the Palace Hotel, which had become a backpacker destination, was deliberately burnt down with loss of life in 2000.

There is a detailed history of the town at http://queenslandplaces.com.au/childers. The local official site - https://www.bundabergregion.org/childers - has useful information about markets and vineyards in the area. 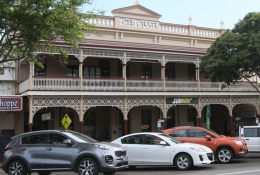 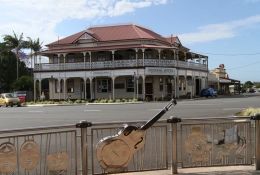 Looking across the road from the Grand Hotel towards the Federal Hotel. 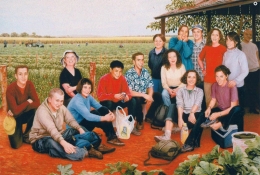 Taking a Break in the Field - Josonia Palaitis's oil painting of the 15 backpackers killed in the 2000 Palace fire. 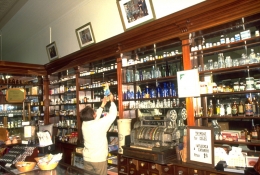 The Pharmacy Museum in the main street 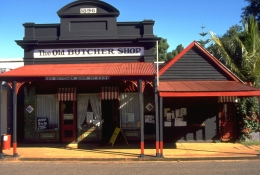 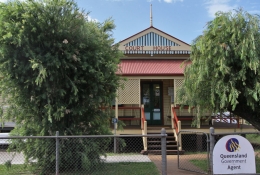 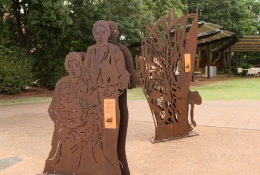 The Kanaka Memorial in Millennium Park on Churchill Street. 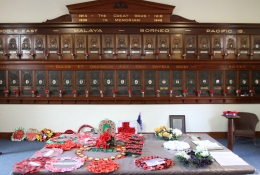 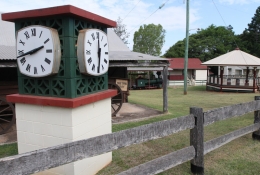 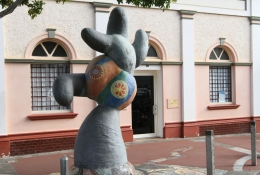 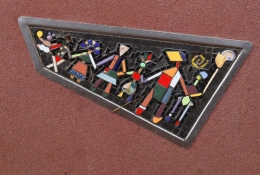 The Festival of Cultures mosaic by Delwynne Dwyer in Churchill Street.