Small town with a large number of historic buildings dating from the goldrush era.

Chiltern is one of those Victorian goldrush towns which seems to have remained largely unchanged since its glory days in the 1850s. The town's quaint and historic appearance has attracted filmmakers and the town has been used in settings including Walt Disney's Ride a Wild Pony in 1974 and the less well-known movies My Brother Tom and The True Story of Spit McPhee.

Originally called Black Dog Creek (reputedly because a black dingo was shot in the area in the 1830s) it was declared a town in 1851, surveyed in 1853, and named Chiltern after England's Chiltern Hills.

Lakeview
As you enter the town from the Hume Freeway you will notice a sign on the corner of Victoria Street directing visitors to Lakeview. It is a typical, cool and large Victorian-era country-town house with a wide front veranda, which dates from the1870s. The family of Dr Walter Richardson moved into this house  in 1876. Ethel Florence Lindesay Richardson, who was six at the time, would become one of Australia's most admired novelists. She wrote under the pseudonym Henry Handel Richardson. She used her memories of the house in the novel Ultima Thule (1929), the third part of her trilogy The Fortunes of Richard Mahony, and also wrote about her time at Chiltern in her autobiography Myself When Young (1948). The house has been restored and is now furnished with  Richardson memorabilia. It is open by appointment, tel: (03) 5726 1317. On January 3 each year the Henry Handel Rcihardson Birthday Celebrations are held at the house. There are guest speakers, an evening picnic and a birthday cake.

Federal Standard Printing Works
Returning to Main St and heading west you will notice, in a park on the right hand side of the road, the small brick office of the Federal Standard (1860-61), Chiltern's first newspaper. Inside are old printing presses and other equipment, still in working order, and dating from the 1870s-1920s. It is open on the second weekend of each month from 10.00am-3.00pm.

Star Hotel and Theatre and historic grapevine
Located on the corner of Main St and Conness St is the former Star Hotel and Theatre which was rebuilt in 1866 after a fire destroyed the 1859 original. In the courtyard (it can be seen from Conness St) is a grapevine which was planted in 1867. With a trunk that measures 1.84 metres and a branch which is 12 metres long it is reputedly the largest in the world. The old theatre houses Grapevine Antiques and Museum. It is closed but can be opened by appointment.  tel: (03) 5726 1395.

Chiltern Athenaeum Museum
Next to the Star Hotel at 57 Conness St is the Chiltern Athenaeum Museum. It was originally a goldfields library, town hall and council chambers and contained a large collection of 19th-century books and some fine examples of the works of local painter Alfred Eustace, whose detailed miniatures on large gum leaves which were collected by Queen Victoria and the Czar of Russia. See http://eustace.id.au/alfred for his biography. There is a good display of local Aboriginal artefacts and memorabilia relating to John McEwan (see Main St North below). The Athenaeum  is, as the sign in the window says, "open most days around 10".

Conness St West
Conness St was named after John Conness, the man who first discovered gold at Chiltern. On the north-western corner of Conness and Main Sts is Gilmour's Corner Store(1890) which is now an antiques shop.

Dow's Pharmacy
Over the road and a little to the west on Conness St are both the National Trust offices and Dow's Pharmacy (1868). Dow's Pharmacy still has its original exterior. Inside is a display of original stock of potions and medicines - and pharmaceutical equipment. It is open from 10.00am-3.00pm depending on the availability of volunteers.

Main St North
Further along Main St, beyond Crawford St,  is 'Linden' (1890) built by local pharmacist, David McEwen, whose son John, was prime minister of Australia from 19 December 1967- 10 January 1968. Over the road are the post office (1863 ), the Courthouse (1865) where the warrant for Ned Kelly's arrest was signed and the Masonic Hall.

Kilgour's Blacksmith and Instrument Factory
On opposite corners of Conness and Kilgour Sts are 'Bellfield' (1870s), the residence of Andrew Kilgour and Kilgour's blacksmith foundry and mining-equipment factory (1865) . For many years Bellfield was known as the finest house in Chiltern.

Railway Station
As you head back to the Hume Freeway you can cross the railway line and turn east. The railway station (1875) is of interest because of its polychrome brickwork and its unusual cast-iron drinking fountains on the veranda posts.

Chiltern - Mt Pilot National Park
Friends of Chiltern Mt Pilot National Park website explains that: "The park protects Box-Ironbark vegetation. Rugged Mugga Ironbarks and Box trees grace the canopy of the Park. A shrub layer, many wattles and smaller flowering plants and native grasses contrast with the hard black fissured trunks of the Ironbarks. The Box and Ironbark forests once covered three million hectares, or 14% of Victoria. Today, 85% of the original forests and woodlands have been cleared, and most of the remaining fragments are degraded by timber cutting, mining or overgrazing. The Chiltern Mt Pilot National Park is an important remnant of this once widespread forest type."
The Park, now 21,565 ha covers land to the north and south-east of the town. It is noted for its birdlife (the rare Regent Honeyeater and Turquoise Parrot can be sighted), Squirrel and Sugar Gliders, Tuans (Phasocgales) and Yellow-Footed Antechinus.
The Chiltern Historic Drive (25 km) is an ideal way to see Donchi Hill (a panoramic lookout over the plains surrounding Chiltern), the Pioneer Cemetery of the Indigo goldfields (established in 1858), the Magenta Mine (from 1860-1910 it produced 13,000 ounces of gold) and the State Battery Site which was established during the 1930s and closed during the 1940s.
The White Box Walking Track (8.5 km - 2-3 hours) is a walk which combines both the historical and natural features of the area. For more information check out the Friends of Chiltern Mt Pilot National Park website http://friendsofchiltern.org.au. It contains lists and photographs of the flora and fauna you are likely to encounter in the park.

Yeddonba Aboriginal Art Site
Located about 12 km south of Chiltern on the Beechworth road, and at the foot of Mount Pilot, the Yeddonba Aboriginal Art Site has a number of walking and driving trails. Ask for brochures and maps at the Chiltern Visitors Information Centre.
For visitors interested in local Aboriginal culture this Art Site offers insight into the culture of the Duduroa people who were once the dominant local indigenous group. There are no surviving members of the group. The main attraction at the Yeddonba Aboriginal Art Site are images of a Tasmanian tiger, a goanna and a snake which are thought to be over 2000 years old. They are faded but cannot be redone. It is believed that elders used this site to pass on the Dreaming story of the Tasmanian tiger which was the group's totem spirit. The orange ochre was probably obtained from South Australia. Also along the trail is a rock cave which the Duduroa believed to be the home of the Tasmanian tiger's spirit. It was reputedly used as an initiation site to connect young men and women with the life force.

The town's quaint and historic appearance has attracted filmmakers and the town has been used in settings including Walt Disney's Ride a Wild Pony in 1974 and the less well known movies My Brother Tom and The True Story of Spit McPhee.

Squatters started settling the land in 1839 and hints of a permanent settlement emerged with the establishment of a bush inn in 1844. The settlement later became a police outpost. Robert O'Hara Burke, of the Burke and Wills expedition, was stationed at Black Dog Creek in 1854.

A township reserve was declared on Black Dog Creek in 1851 and the site was surveyed in 1853. The settlement was abandoned in 1858 when John Conness discovered the Indigo gold lead.

A new town grew up along the miner's track to the New Ballarat lead (now Conness St) and the track from Beechworth to the Indigo lead (now Main St). In 1859 the Star Hotel was built at the intersection of these two tracks.

At its height the town had an estimated population of up to 20,000 prospectors but this was short lived because the leasily accessible gold disappeared and deep quartz reef mines which required major investments dominated the local economy. Prospectors moved to easier alluvial fields.

A new townsite was surveyed in 1860 and Chiltern was proclaimed a municipality in 1862.

By 1865 the town had about 2200 residents and the economy had diversified. Mixed agriculture and vineyards were being developed; there were two steam-powered sawmills; and quartz-reef mining continued. Around this time the town was sufficiently prosperous to have 12 hotels, the Federal Standard newspaper office, a post office and telegraph station, three banks (the Australasia, New South Wales and Oriental Banks), a county and police court, five insurance offices, a coach office and a newsagency.

The novelist Henry Handel Richardson, considered by many to be one of Australia's greatest novelists, lived at Chiltern from 1876-77.

By 1888 there were still 12 hotels although the population was reduced to 1243 residents and there were only two banks. Gold mining continued until the last reef was abandoned in 1911.

The Chiltern Ironbark Festival is held on the second Sunday in October celebrates the natural environment and the town's history with guided walks as well as displays of coopering, sheep shearing, wood chopping and post and rail fencing.

The town's Visitor Information Centre is located in Main Street just before Conness Street. Even when closed it has a range of useful brochures outside. If you want to explore the town's historic buildings get a copy of the free brochure Chiltern Touring Guide and the Chiltern: Share the Magic booklet. They also provide information about the Parks and Walks in the area. Guided tours can be arranged by calling Rex Fuge from the Chiltern Athenaeum on either (03) 5726 1280 or (03) 5726 1462. 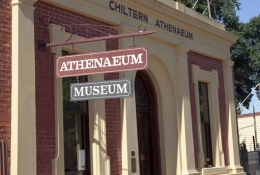 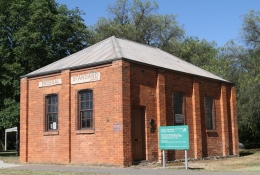 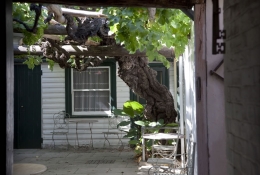 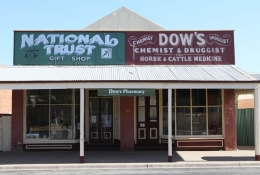 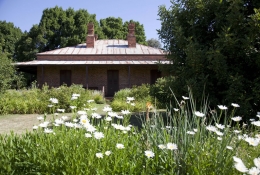