Rural service centre known as Melon Capital of Australia and famed as home of the Cactoblastis Hall.

In recent times, Chinchilla, located between Miles and Dalby and 302 metres above sea level, has been part of the mining boom (coal and gas) in Central Queensland which has seen roads upgraded, constant streams of trucks roaring through the town, and temporary villages of accommodation spring up to cater for the transient workers. Beyond the mining boom the town is a middle-sized service town for the surrounding agricultural district and is known primarily for its excellent Chinchilla Historical Museum and the fascinating story of how, in the late 1920s, it was central to the successful eradication of prickly pear.

Chinchilla is located 290 km west of Brisbane on the Warrego Highway. It is 302 m above sea level.

Chinchilla was named after Chinchilla Station which was established in 1848 as an extension of Wongongera Station which had been leased in 1846. It was probably a corruption of a Barunggam word for "cypress pine" which Ludwig Leichhardt, filtering it through his native German, had recorded as "jinchilla".

Chinchilla Historical Museum
Located at 17-33 Villiers Street and open from 9.00 am - 4.00 pm daily, the Chinchilla Historical Museum is "dedicated to the natural resources of the Chinchilla area and the history of their use. It offers a glimpse into farming and local industry with key displays including: the ‘Cypress Pine Centre’, which tells the story of the saw milling industry that established the town of Chinchilla (it is believed that the town name comes from the Aboriginal word ‘Jinchilla’ which means Cyprus Pine); the ‘Green Plague’ exhibit, explaining the devastation caused by the Prickly Pear cactus and the development of the local cactoblastus moth breeding program; and, the Melon Festival display, celebrating Chinchilla as the ‘melon capital’ of Australia, and telling the story of this important industry and its contribution to the economic and tourist growth in the town." It has one of the country's unique rarities - the first ticket ever issued by Qantas to a Mr A. Kennedy for the first flight from Longreach to Cloncurry. The museum used to hold the original but now it holds a photocopy. The original has been taken to a museum in Brisbane. As well it has an extensive display of working steam engines, a rare three cylinder engine which can move effortlessly into a reverse cycle, and the old Wongongera Slab Cottage, which dates from the 1880s. There is also a remarkable collection of fossil woods including petrified Jurassic era vegetation and the Chinchilla Red. For more information check out http://www.magsq.com.au/_dbase_upl/Chinchilla%20profile.pdf.

Boonarga Cactoblastis Hall and The "Green Plague"
Located 10 km east of Chinchilla on the Warrego Highway is the Boonarga Cactoblastis Hall which was built by the local farmers and dedicated to the insect which ate its way through the jungles of prickly pear. At the time it was seen as the true saviour of rural Australia and thus it is an appropriate homage that a hall should have been dedicated to its memory.

The story is extraordinary. As early as 1788 Governor Phillip brought prickly pear to Sydney hoping to establish a fabric dye industry and produce the red used for soldier's jackets. Around 1848 Matthew Goggs reputedly brought prickly pear to the Chinchilla district. By 1870 the authorities recognised that the plant was out of control and by 1893 it had spread across the border to New South Wales. In 1895 Queensland listed prickly pear as a noxious weed and five years later it had spread and infested 4 million hectares. By 1900 the area covered by prickly pear was increasing at a rate of 400,000 hectares a year and by 1901 the government, recognising the scale of the problem, was offering £5,000 for a solution. That amount was doubled in 1907.

The prickly pear problem was so bad that farmers were using anything and everything to stop the growth. Someone suggested flame throwers. Someone else wanted to use World War I tanks. Around 1912 chlorine gas was being used and a year later farmers were demanding soda and arsenic to try to control the weed. By the 1920s there were 24,250,000 hectares of Australia covered with prickly pear. This was larger than the total area of the United Kingdom.

So great was the crisis that in 1923 the Queensland Government established a Royal Commission to investigate the problem and find a solution. As a result, in 1924, Alan Dodd went to America to explore the possibility of biological control. He went to Uruguay and Argentina and in Buenos Aires he came across the Cactoblastis cactorum moth. He decided to ship the moth's eggs to Australia. Initially 3000 eggs arrived from Argentina and from a population of 527 females a total of 100,605 eggs were hatched. Half these eggs were sent to the Chinchilla Prickly Pear Experimental Station and half were kept in Brisbane. The moth bred with enthusiasm. The second generation yielded 2,539,506 eggs. At the height of the operation Chinchilla was sending out as many as 14 million Cactoblastis eggs a day.

By 1931 the much-loved Cactoblastis had brought the prickly pear under control and the land around Chinchilla was being opened up to selection. There were 1318 applications for land in the first year. By 1936 the Chinchilla Prickly Pear Experimental Station was closed down. The story of Cactoblastis and its successful battle against prickly pear is the most successful example of biological content, ever. No wonder the locals decided to dedicate a hall to this small insect.

* Prior to the arrival of Europeans the Barunggam clan of Aboriginal people lived and moved through the area.

* The first European explorer into the area was Allan Cunningham in 1827.

* By the 1840s settlers had moved in and were occupying the land in the district.

* By 1844 European settlement had reached Jimbour some kilometres to the east of the present site of Chinchilla.

* On 9 October 1844 Ludwig Leichhardt and his party passed nearby and that night camped on Rocky Creek only a few kilometres from the present site of Chinchilla.

* Chinchilla Station was established in 1848 as an extension of Wongongera Station which had been leased in 1846.

* In 1878 the railway arrived and with it a camp for the workers which was probably the basis for the town.

* The old Wongongera Slab Cottage, which dates from the 1880s, is recognised as the first building in the district. it stands in the grounds of the Chinchilla Historical Museum.

* In both the 1890s and the early part of the twentieth century the Queensland Government developed the area around Chinchilla with programs of closer settlement. * The decade prior to World War I saw the population of the area increase dramatically. The new settlers became successful dairy farmers and the economy of the area was driven by dairying for the next fifty years.

* In 1921 the Chinchilla Hospital was built.

* By 1925 the Chinchilla Prickly Pear Experimental Station was established.

* By 1931 the prickly pear had been eradicated and the government was selling land in the area.

* In 1932 reticulated electricity was turned on for the town.

* By 1936 the Chinchilla Prickly Pear Experimental Station was closed down and the Boonarga Cactoblastis Hall was built by the local farmers and dedicated to the insect.

* In 2007 the Kogan coal fired power station was built.

There is a small amount of useful information at http://www.queensland.com/destination%20information/Chinchilla and there is a good, detailed history at http://queenslandplaces.com.au/chinchilla. 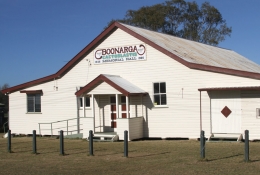 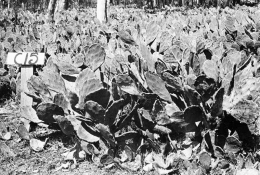 Forests of prickly pear in the late 1920s. 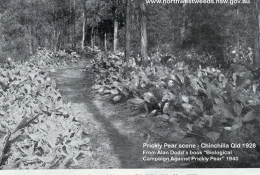 Photo of prickly pear around Chinchilla in 1928. 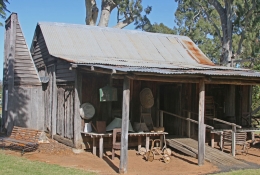 The historic slab hut at the Chinchilla Historic Museum. 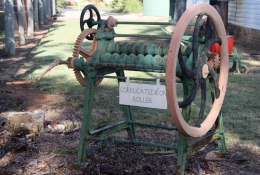 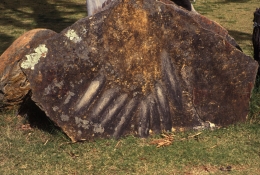 A large piece of stone worn smooth where Aborigines used to sharpen their stone tools at Chinchilla Historical Museum. 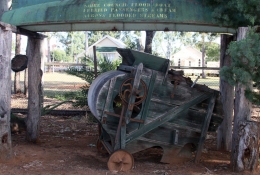 A canoe and old piece of farm machinery at the Chinchilla Historical Museum. 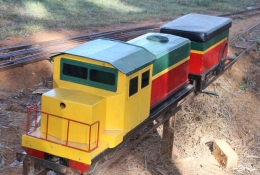 The miniature railway at the Chinchilla Historical Museum. 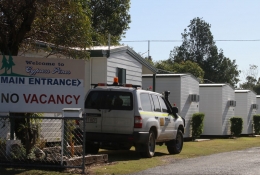 Temporary accommodation for mine workers at the local Cypress Pines caravan park in 2013.