Churchill is a modern, purpose-built town which was constructed to provide accommodation for workers (and their families) who were involved in the construction and maintenance of the Hazelwood Power Station. Today it is a commuter suburb for people working in the surrounding district and is home to the Federation University which has 2,000 on-campus students and 400 staff.

Churchill is located 161 km from Melbourne via the Princes Highway. It is 12 km south of Morwell and 140 metres above sea level.

The town was originally named Hazelwood after a pastoral run established in the area in 1844. When a purpose-built town was constructed the Victorian government, against considerable local opposition, renamed the town Churchill after the British wartime leader who was famous for his passionate speeches, his V for Victory finger sign and his penchant for cigars.

Hazelwood Cooling Pond
Accessed from the town along Switchback Road, the Hazelwood Cooling Pond was an ideal place to sail, use a powerboat, waterski, yacht, canoe and swim. It has a number of pleasant picnic locations on the shores. It is now closed to the public.  The water is constantly between 18°C - 23°C. The Hazelwood Power Station generates 1600 kw and requires 160 million litres of water per hour. The water is disgorged into an artificial lake.

Memorial Stone to the Soldier Settlers
On Yinnar Road at the Anzac Lookout above Hazelwood Cooling Pond there is a plaque installed by the RSL "in recognition of the contribution made to the early development of the Hazelwood district by the 51 returned soldiers from the First World War 1914-1918 who were allocated land by the Soldiers Settlement Commission to develop dairy faarms in the area to the south and west of this point and now is covered by the Hazelwood Pondage."

The Big Cigar
David Clark's excellent Big Things: Australia's amazing roadside attractions explains: "Looking more like a giant fly swat, the 32 metre high Big Cigar was imposed on the town by the Housing Commission, who wanted something to symbolise Churchill's progress. Originally known as the 'spire' when it was unveiled on 21 December, 1967, it was quickly dubbed the Big Cigar by locals because of the close resemblance to a cigar and their association with Winston Churchill. The local Rotary Club erected a wall under the Big Cigar in November 1990 to commemorate the farmers whose land was acquired by the town. Over the years the cigar also became a popular nesting place for pigeons, eventually ruining the internal lighting. New external lights were built and switched on in November, 1999."

The History of the Artificial Town
Churchill was created by the Victorian Government in the 1960s to house workers and their families who were constructing the Hazelwood Power Station. It was chosen because it wasn't sitting on top of any coal, it had a genuinely pleasant location and it was relatively free from air pollution. It was also close to the larger towns and power stations in the Latrobe Valley. In fact it has evolved into a commuter suburb.
It was planned that the new town included private and Housing Commission estates. The houses were to be all brick and of varied designs. The residential areas were to be grouped around the town centre so that people could walk through parks and under main roads to the town centre. There were to be 11 neighbourhoods named after the district's pioneering families. Each neighbourhood would consist of about 600 homes grouped around parks, a school and corner shops. The proposals were ambitious. There were plans for a shopping mall, large department store, market, theatre, civic centre, cultural centre, hotels, offices, bus terminal, racetrack, golf course and area for light industry and it was hoped that the population would eventually reach 40,000 people.
Land was compulsorily acquired and house construction commenced in late 1964. The first families took up residence in late 1965. The town was first known as Hazelwood, but in February 1965, the government changed the name to Churchill to honour Sir Winston Churchill. The local response was very negative and very vocal and it wasn't until November 1966 before the issue was definitely settled in favour of Churchill.

A Circular Route from Churchill - The Power Station and Mines of the Latrobe Valley
The route from Churchill is as follow (the numbers relate to the download brochure): Head west from Churchill on Switchback Road and turn right at Yinnar Road. As you drive around Hazelwood Cooling Pondage, which is now open from fishing and boating (there is a lookout and a Power Boat Club launching site just off Brodribb Road), you will see:

5. Hazelwood Power Station
The Hazelwood Power Station was closed down in April, 2017. It was supposed to close in 2005 but was privatised and the government allowed it to keep operating. At its peak, when it was Victoria's second largest power generator, it had  a capacity of 1600 megawatts and required 160 million litres of cooling water. Hazelwood used thermal brown coal. It commenced operations in 1964 and had eight boiler-turbine units. When it was operating water left the plant at up to 50 °C and cooled as it travelled to the Pondage.

3. Hazelwood Mine
The mine had a surface area of 300 ha and at its peak it employed five dredges extracting 19 million tonnes of brown coal each year. The coal was carried on conveyor belts to the power stations. In recent times there has been talk of allowing the mine to fill with water and using it as a picnic and bird watching facility with a walking track, wetlands and a waterfowl refuge.

4. Jeeralang Power Station
If you return to Churchill and head north towards Morwell on Tramway Road you pass the Jeeralang Power Station which was opened in 1971 and is currently controlled by Ecogen Energy. It is a gas turbine peaking station which operates on natural gas from Bass Strait. Within 12 minutes the station can supply an extra 449 MW to the state's power grid. Jeeralang consists of seven gas turbines configured to operate in single cycle mode. The plant is divided into two stations, "A" Station which consists of four gas turbines with a combined capacity of 220 MW and "B" Station comprised of three gas turbines with a combined capacity of 240 MW.

6. Morwell Terminal Station
The Morwell Terminal Station can be viewed from Monash Way north of Churchill and south of the Princes Freeway. It is the main source of supply for a major part of south-east Victoria including all of Gippsland. The geographic coverage of the station’s supply area spans from Phillip Island to Bairnsdale and Mallacoota.

7. Energy Brix Australia
On the left as Monash Way heads towards the Princes Freeway, is Australia's largest co-generation manufacturing complex. Between 1956 and 2014 it produced both electricity and brown coal briquettes. At its peak Latrobe Valley Coalfields produced about 300,000 tonnes of briquettes each year. It was progressively demolished starting in 2017.

8. Morwell Open Cut Mine
Located to the south of the Princes Freeway this huge open cut mine was the second to be established in the Latrobe Valley. It is hard to stop (as it is a freeway) but if you look south you can see dredges which, at their peak, extracted 19 million tonnes of brown coal each year. The mine is expected to continue operating until 2030. The best viewing point for the mine is at the PowerWorks Visitors Centre.

9. PowerWorks Visitors Centre
The PowerWorks Visitor Centre is a coal and power museum  which was operated by the Latrobe Valley power generation operators until it was closed in 2012. It was gifted to the community by AGL Loy Yang, GDF Suez Hazelwood and Energy Australia Yallourn. It has since been reopened with volunteers who curate the exhibits and interactive displays and it offers lots of information about the changing nature of power generation. It provides good views over the Morwell open-cut mining operation. The main feature is Dredger 21, the huge No. 21 Bucket Wheel Dredger which was the first of its type to operate in the Morwell mine and was originally used to remove the overburden. The sign records: 'The postwar years brought about radical change to mining methods and the use of this kind of bucketwheel technology is now commonly used throughout the Australian mining industry.' Open Friday, Saturday and Sunday 10.00 am – 3.00 pm. For more information check out  http://www.powerworks.net.au.

10. Yallourn Mine Lookout
Drive west along the Princes Freeway and turn north to Yallourn and Yallourn North. On the road north there is an excellent viewing area looking over the Yallourn Open Cut. Coal has been mined here since 1921. There is a map at the lookout which shows where the town of Yallourn, which was built in 1921 and which once had a population of  5,000, stood until 1971 when it was dismantled and moved so that the coal underneath could be accessed.

11. Yallourn Power Station
Located to the east of the road to Yallourn North, this huge open cut mine started in 1924 and was the site of Victoria’s first permanent power station. The Yallourn East Coal Field river diversion provided access to new reserves which means the mine can keep operating for another 30 years.

1. Miner's Lookout
Drive from Yallourn North to Traralgon (Yallourn North Road and the Princes Freeway) and at Traralgon follow the C482 (Traralgon Creek Road) road south towards Loy Yang. The Miner’s Lookout offers an excellent view of the Loy Yang Open Cut Mine with the Power Station to the south of the mine.

2. Loy Yang A & B Power Station
Continue on Traralgon Creek Road and the Loy Yang Power Station is clearly visible on the eastern side of the road.  Construction began in 1977 and it started producing electricity between 1984-1988. It currently has an output of 2,200 MW and it’s two chimneys are 260 metres high. Construction of Loy Yang B commenced in 1985 and it came online in 1993, when the first of its two 500 MW generating units began operation. The second commenced commercial operation in 1996. It produces 1000 MW of electricity. For more information check out http://www.gdfsuezau.com/about-us/asset/Loy-Yang-B-Power-Station.

* Prior to the arrival of Europeans the area was home to GurnaiKurnai First Nation people.

* The Hazelwood pastoral run was established in 1844.

* In 1886 a branch railway line connected Morwell to the main line from Melbourne.

* In 1922 allotments were allocated by the Soldier Settlement Scheme.

* Churchill is a purpose-built town, approved in 1964 and constructed in 1964-1965 to provide accommodation for workers (and their families) who were involved in the construction and maintenance of the Hazelwood Power Station.

* In February, 1965 the government changed the name from Hazelwood to Churchill.

* A Citizens Association was formed in 1966. A post office opened that year.

* In 1968 the local shopping centre was opened.

* Hazelwood power station was completed in 1971.

* In 1972 the Gippsland Institute of Advanced Technology was opened in the town.

* In 2009 the Black Friday bushfires killed 11 people in the local area.

* In 2014 the local university changed its name to Federation University Australia Churchill. 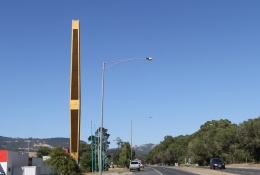 The Big Cigar - "looking like a giant fly swat" - in Churchill 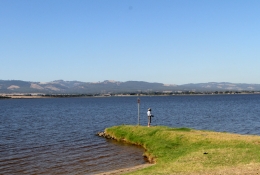 Fishing in Hazelwood Pondage near Churchill 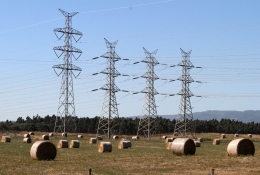 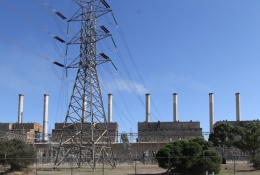 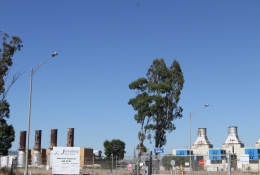 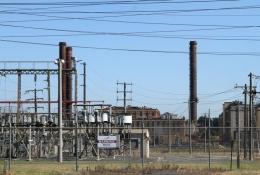 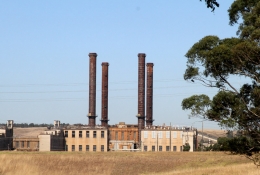 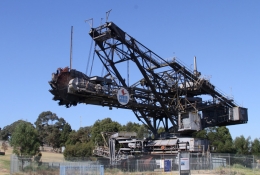 Dredger 21 at the entrance to the Power Works exhibition. 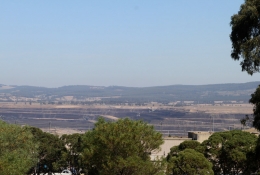 View over the Morwell Open Cut Mine from the PowerWorks site. 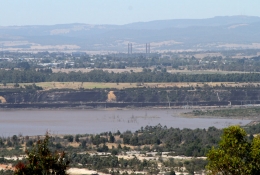 View from the Yallourn Mine Lookout across to Morwell. 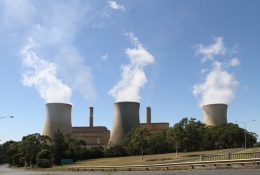 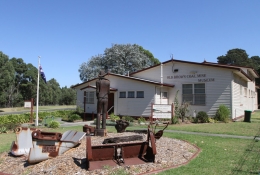 The Old Brown Coal Mine Museum at Yallourn North 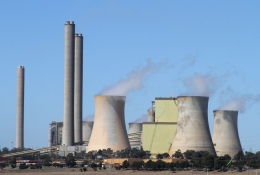 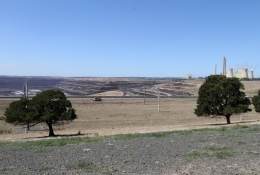