If the excellent murals along the railway line on Herschel Street are an accurate indication, then Clermont is an important rural service centre where the economy has been driven by coal mining (at Blair Athol); gold and copper mining at Copperfield; cattle and sheep grazing; and the growing and harvesting of productive grain crops. The town's central appeal lies around Hood's Lagoon where, in 1916, a flood of such ferocity killed a staggering 65 members of the local community. It is recalled in a series of monuments, sculptures and memorials. The town lies near the impressively beautiful Peak Range Park.

Clermont was gazetted in 1864 and named after Clermont-Ferrand in France, the home of Oscar de Satge who at the time was the owner of Wolfang Downs.

The Murals
Possibly the most impressive murals in Australia, the quartet of railway carriages painted by Glen Gillard in 1999 and repainted in 2010 are clever illustrations of the activities which have made Clermont prosperous. There is a railway carriage dedicated to the cattle industry, the mining industry (both gold and coal), the sheep and wool industry and the grain and cropping industry. These are more than simple depictions of activities: miners dig for gold against a background of modern open cut mining; a sheep dog leaps a fence while an itinerant shearer wanders the dry plains of western Queensland; and droving on horse and motor bike give way to stockyards and roadtrains in the cattle mural. Spend some time and savour this unique depiction of Queensland rural life. There is a green frog hidden on each of the four murals.

Clermont Flood - December, 1916
The original town was badly located. The plaque beside the Flood Tree (a memorial to the tragedy) explains the situation: "From 1860 to 28 December, 1916, Drummond Street was the main street of Clermont, and this replica of a tree marks the corner of Drummond and Capricorn Streets. On Thursday Morning, 29 December, 1916, a wall of water from Wolfang Creek on top of Sandy Creek, which was already overflowing its banks, began sweeping houses and shops downstream. The maximum height was approximately that shown by the mark above and by the time the water had subsided next morning, some sixty people had perished and Clermont had been destroyed in one of the biggest calamities in Australia up to that time.
The tree was chosen to mark this event because numerous residents were rescued from trees after the water had receded on Friday morning. The remains of the town were shifted to higher ground where Clermont now stands." That is the importance of the event. The whole town moved because it had been built on a floodplain and 65 people were drowned.

Hood's Lagoon and the Pioneer & Centenary Park
Hood's Lagoon and Pioneer and Centenary Park are located between Drummond Street and Lime Street. The first town of Clermont was established on the northern banks of the Hood's Lagoon in 1862. This was a major mistake because this was low lying flat land between Sandy Creek and the lagoon and it was vulnerable to cyclonic rains which came in summer from the Coral Sea. By 1896 the township had already experienced four floods. A memorial plaque at the southern entrance of the Lagoon honours the victims of the 1916 flood that destroyed the entire business sector and in which 65 people perished. A marker on the tall pole depicts the height of the flood water. Today, this area is grassy, there are ducks in the lagoon, there are pleasant walks around the lagoon. There is a rock water feature and bridge which crosses the lagoon. Across the road from the flood marker pole is the famous 'piano in the tree'. This is a replica of an actual piano which was lodged in the tree after flood water had receded. This replica depicts a piano which was one of three pianos found in trees after the 1916 flood.

Hood's Lagoon Walk
You can walk around the lagoon. The distance is 1.8 km along which there are a series of memorials, monuments and sculptures depicting Mary McKillop, Billy Sing, the northern Hairy-nosed Wombat and the pioneers of the district.

Clermont Historical Centre
Located near the junction of the Gregory and Peak Downs highways, about 2 km north of the town centre, is the new Clermont Historical Centre which enhances the town's original museum with themed exhibitions focusing on local identities including Trooper Billy Sing the Gallipoli sniper and Rose Harris who was one of the local heroines of the 1916 Great Flood. The collection of nearly 8,000 artefacts includes the steam engine which was used to shift the town after the 1916 Flood, the Jacques Diesel Powered Shovel and the Ruston Steam Shovel used at the Blair Athol Mine. There is also a shearing shed, a livery and vintage cars and tractors. Open Wednesday - Saturday 9.00 am - 3.00 pm, tel: (07) 4983 3311. Check out http://www.mackayregion.com/clermont-historical-centre for more details.

Copperfield and Miclere
The copper and gold mining history of the region are recalled in the ruins of Copperfield, which are located 4 km south of Clermont, and Miclere which is located 4 km off the main road some 31 km north of the town, on the Charters Towers Road.
Copperfield once had 2,000 people, three hotels and a wide range of businesses. Today all that remains are the Copperfield chimney, the General Store and the local cemetery.  Miclere is still operational. This tiny settlement contains remnants of bygone mining processes including the old battery and a rare horse-drawn whim.

Peak Range National Park
The most impressive scenic attraction in the district is the Peak Range, a series of dramatic volcanic plugs which stand like sentinels rising from the plains some 50 km east of the town. The plugs were formed when volcanoes, which erupted some 29-32 million years ago, cooled and the molten lava solidified in the volcanic pipes. The surrounding land eroded leaving only the hard core protruding. One of the most dramatic examples of this is Wolfang Peak on the southern side of the road from Clermont to Mackay. It is possible to climb it. It is 572 m and takes around an hour. There are a couple of catches: a colony of bats live in a cave on the way to the summit and the summit itself is home to the giant St Andrew's Cross spiders (http://australianmuseum.net.au/st-andrews-cross-spider). Before climbing Wolfang Peak read http://www.isaac.qld.gov.au/peak-range-national-park for advice and information.
The Isaac Regional Council website notes: "Visitors to Peak Range National Park can enjoy bushwalking and photography, with spectacular geological features, views and historical interest. Peak Range National Park provides a remote natural setting with no motorised vehicle access, facilities or defined walking tracks. The National Park contains four plant species of conservation significance; Acacia arbiana, Bertya pedicellat, Troncinia patens and Dichanthium queenslandicum. Two animal species of conservation significance have been recorded in the area; the squatter pigeon Geophaps scripta scripta and the koala Phascolarctos cinereus as well as sightings of the whip-tailed wallaby Macrophus parryi."

Blair Athol Mine
Located 30 km north west of Clermont, Blair Athol was one of the great open cut coal mines in Central Queensland. Originally a grazing property, Blair Athol Station was named by pastoralist James McLaren in honour of his Scottish birthplace. Coal was first discovered in the area as early as 1864 but the distance from the coast and the ready supplies elsewhere prevented development. It wasn't until the oil and energy crisis of the early 1970s that the area was re-evaluated. The result was that the mine, which reputedly has the largest seam of steaming coal in the world - it is apparently 29 metres thick - was brought into productive operation. By 1984 coal from Blair Athol was being exported. The mine closed down in 2012 and there is an assessment that it will require over $160 million for environmental rehabilitation. It was sold for $1 to TerraCom in 2016 but there was strong opposition from activists who believed that such an agreement left the Queensland Government exposed to huge environmental costs. Read http://www.abc.net.au/news/2016-07-12/rio-tinto-selling-massive-queensland-coal-mine-for-dollar/7588916 for more information.

* Prior to the arrival of Europeans the area was occupied by people from the Wangan Aboriginal language group.

* The first European through the area was Ludwig Leichhardt who, in 1845, travelled to the west of the town sighting the mountains of the Peak Range and naming them after members of his expedition.

* In 1854 Charles and William Archer, who went on to establish the port at Rockhampton, explored the area.

* By 1855 Jeremiah Rolfe became the first white settler in the district.

* In 1863 the Peak Downs Copper Company began mining copper near the town. By that year nearly 1,000 prospectors were searching for gold in the area.

* A Catholic church was consecrated in 1866.

* In 1870 fifteen people died during a major flood.

* The Copperfield municipality was created in 1872.

* Supplies of copper and gold were short-lived and by the 1870s the area was in decline.

* In 1884 the railway from Emerald reached Clermont.

* By 1886 the town had an exclusive club for wealthy miners and property owners, the Clermont Club. A bridge across the lagoon was also built that year.

* By the 1880s, when there were nearly 4,000 Chinese working on the gold and copper fields. Clermont experienced some particularly ugly racial riots.

* The Chinese were removed from the fields in 1888.

* In 1891 the Shearer's Strike reached Clermont when 400 troops were called in to separate striking shearers and non-union labour.

* The town's worst flood (and the second-worst in the country's history in terms of loss of life) occurred on the night of 28 December 1916 when cyclonic waters rushed through the town and drowned at least 65 people.

* An Olympic-sized swimming pool was opened in 1960.

* The Flood Memorial tree was constructed in 1980.

* In 2012 Rio Tinto announced that it was closing the mining operations at Blair Athol because "the coal seams are largely mined out".

There is a useful local website. Check out http://www.mackayregion.com/clermont. 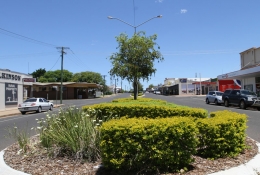 The main street of Clermont. 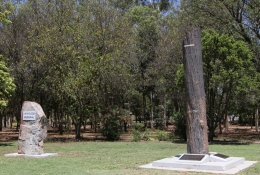 The 1916 Flood Memorial and Flood Marker Pole at Hood's Lagoon. 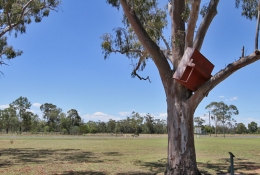 The "Piano in the Tree" 1916 Flood Memorial near Hood's Lagoon. 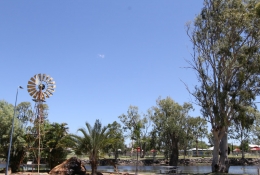 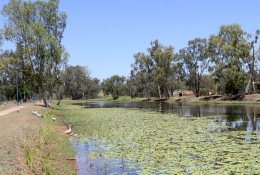 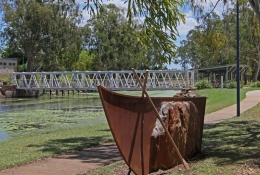 A memorial to the 1916 Flood on the walk around Hood's Lagoon. 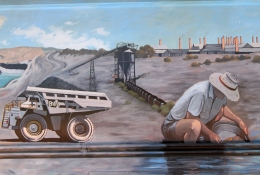 Detail of the mining mural on Herschel Street. 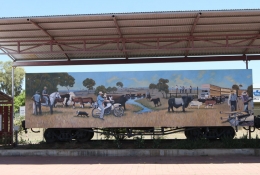 One of the many murals on railway carriages on Herschel Street. 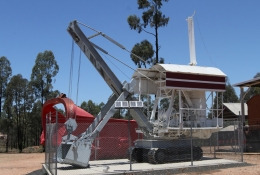 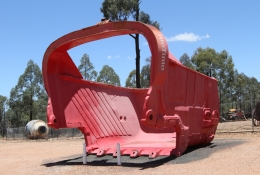 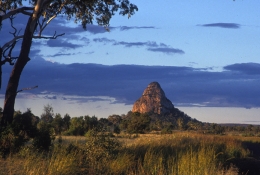