Brisbane now sprawls north towards the Sunshine Coast and south towards the Gold Coast. To the east it is a series of commuter suburbs edging Moreton Bay. They all lie between the mainland and Stradbroke Island. One of the most significant coastal settlements is Cleveland which, because it was once promoted as the future capital of the state, is now an important coastal town with a number of historic buildings and a delightful walk along the coast. It is recognised as the main access point for people wanting to explore Stradbroke Island.

Cleveland is 27 km due east of the Brisbane CBD. It is 10 m above sea-level.

It has been suggested that Cleveland was named by Captain James Cook when he sailed by in 1770. It was reputedly named after John Clevland (that is the correct spelling) who had been the First Secretary of the Admiralty from 1759 until his death in 1763. This, however, is unlikely as the Redland City Council insists that when the area was surveyed in the 1840s it was named after the Duke of Cleveland, William Henry Vane, by the surveyors.

Historical Buildings
Cleveland has a number of historical buildings dating back to the 1850s and 1860s when it was a coastal village. There is a downloadable map listing a total of 36 places of interest in the area. Check out http://www.redland.qld.gov.au/RecreationFacilities/CultureHeritage/Documents/ClevelandOrmistonHeritageTrailMap.pdf for more information.

Cleveland Lighthouse
The Cleveland Lighthouse, an unusual polygonal wooden building which was constructed in 1864-1865, served the area for 110 years before modern technology saw it replaced. The light was 10.6 m above high tide and could be seen for 14.5 km out to sea. It is now recognised as a significant historic landmark because it is a reminder that Cleveland once hoped to be the major port for Queensland. The timber design was so that the lighthouse could be moved relatively easy. The shifting sands of the coastline were such that it would need to be removed. In 1943 it was electrified . In 1969 it became one of the first places in Australia to experiment with laser lights. It was re-sited in 1975 and now stands at Cleveland Point Reserve. A newer concrete lighthouse was erected in that year. The Old Cleveland Lighthouse lens is now on display in the Redland Museum. There is a very detailed history of the lighthouse which can be downloaded at http://www.redland.qld.gov.au/AboutRedlands/History/PeopleandPlaces/Documents/History-of-Cleveland-Point-Lighthouses-(3).pdf.

Cleveland Court House
The old Court House at 1 Paxton Street was built in 1853 by Commissioner Francis Bigge as a house for his workers, particularly his timber cutters. It was used as a police station and a courthouse until around 1880 when it was replaced. At the time it was sold to a private buyer and today it is a popular restaurant and wedding venue.

Grandview Hotel
Known when it was built as "Bigge's Folly", the Grandview Hotel in North Street was built by Commissioner Francis Bigge. It was completed in 1849 in an attempt to persuade the authorities that Cleveland should be the capital of the state. Sadly it failed and it closed in 1855 and was renamed Cassim's Family Hotel and Boarding House. This operated until 1860 after which it was named the Brighton Hotel. Prior to the construction of St Paul's Anglican Church in 1874 the hotel was used as the local Anglican church. It was renamed the Grand View in 1910. It is one of a number of establishments claiming to being Queensland's oldest licensed hotel with a sign declaring "No. 1 since 1851".

Redland Museum
Located in the Cleveland Showground at 60 Smith Street. The museum's website explains that "It consists of over 14,000 items presented on 2700 square metres of floor area. In other words – it is big!! You can see, read about and feel magnificent artefacts that are displayed as a record of the Redland Shire’s social history from 1842 to the present day. We have many treasures that exemplify the ingenuity of our pioneers and their descendants. There are rare objects in the marine, military, school, parlour and music rooms. Our unique engine, machinery, transport, textile and doll displays are amazing." It is open rom 10.00 am - 3.30 pm Monday to Friday, 1.00 pm - 4.00 pm on Saturday and 10.00 am - 4.00 pm Sunday. Tel: (07) 3286 3494 or check out http://www.redlandmuseum.org.au/ for more details.

Ormiston House - The Birthplace of the Australian Sugar Industry
Located at 277 Wellington Street, Ormiston, Ormiston House was built around 1862 to replace an even earlier slab and pit-sawn cedar residence, dating from around 1853, which was originally used as accommodation and a kitchen for the workers and is still used as the house's kitchen. The main house, a glorious colonial residence, was built for Captain Louis Hope using timber and labourers he had brought from Scotland. Hope had taken up 700 ha of land in the Redland shire in 1853. The excellent and detailed website - http://ormistonhouse.org.au/ - provides the following description:

"Ormiston House displays the simplicity yet elegance of early colonial architecture. The wide verandahs, huge doors, fireplaces, security shutters, French lights and highly decorative ceilings combine to make this one of the finest remaining examples of colonial architecture in Queensland.

"The bricks were baked locally, the name of the foreman Cowan being marked on some bricks. The roof, originally shingled, was replaced early on with corrugated iron (heritage gauge and heritage length) and restored by Colorbond in the same gauge and length in 1993. Shutters, architraves, door frames are of solid cedar and the door panels are mahogany. The door knobs are of oxidised brass in the beehive design. The cypress floors have been extensively restored. The verandahs were originally of cobblestones, replaced in the 1970’s by sandstone from Helidon .

"Twin Doric columns supporting the wide verandah roof were cut from local cypress and pine and shipped to England to be turned.

"The ceilings in the first section of the house were originally of calico and in the second stage, lathe and plaster. It is believed the magnificent metal zinc ceilings were installed circa 1917 during the ownership by the Macartney family. The designs were by Wunderlich’s top designer of the time, Samuel Rowe, who used small hearts as his signature in the designs.

It is claimed that Captain Hope was the first person to grow sugar cane commercially in Queensland. Certainly his mill was the first to crush sugar cane in 1864. Set in a magnificent garden, it is open on Sundays from Noon to 4.00 p.m. between March and November. For more details contact (07) 3286 1425.

* For at least 21,000 years the area around Cleveland had been the home for the Koobenpul Aboriginal people. It is known that the Koobenpul people traded bunya nuts for pippis with the Minjerribah people of North Stradbroke Island. This Aboriginal history is well recorded at http://www.redland.qld.gov.au/AboutRedlands/History/Documents/inthebeginning.pdf.

* In 1770 Captain James Cook passed up the coast but did not land.

* In 1799 Matthew Flinders entered Moreton Bay. He returned in 1803 and the local Aborigines showed him where to find fresh water.

* In 1824 the Moreton Bay Penal Settlement was established at Red Cliffe Point.

* A pilot station was established at Amity Point in 1825.

* In the 1840s Cleveland was considered a possible future capital and the main port for Queensland.

* In 1842, Governor Sir George Gipps sailed to Moreton Bay to assess the location of the future capital of Queensland. Many people thought that Cleveland, which was on Moreton Bay rather than the Brisbane River, would be ideal. Gipps leapt from his boat and sank up to his waist in the muddy tidal flats. This was enough for him to decide on Brisbane as the major port for the colony.

In The Genesis of Queensland, written by Henry Stuart Russell in 1888, the reason for Cleveland’s failure to impress the Governor is recorded in amusing detail in a diary entry by Captain Gilmore:

“‘Well,’ said Sir George, ‘I should like to see Cleveland before proceeding to Brisbane, Captain Gilmore.’

“So to Cleveland we headed and anchored at low tide about a mile from it on the afternoon of the 24th, having entered the Bay by the Amity Point passage. Moreton Bay mud and I had once made acquaintance: I sought no renewal.

“His Excellency and suite were boated to the ooze as far as the depth admitted; there was no help for it. Too heavy to be carried, they all had to take to the water, which was more in conformity with their tastes, it appeared through the Captain’s glass, than the mud proved to be.

“Floundering and flopping through such a hundred  yards of deep nastiness was quite enough to settle the question between Brisbane and its rival.

“In about two hours the tide had risen sufficiently to spare them much of such footing on return.

“There may bave been ‘deeper’ policy in timing such a visit – at lowest ebb – with a view to prepossessing His Excellency than my simplicity had been able to wade into.

“The Governor had seemed much pleased at the appearance of Cleveland Point, when we approached it. I observed that he did not look back – as Lot’s wife once did – at the haven in dispute.”

* Cleveland was declared a township in December, 1850.

* The first land sales in Cleveland occurred in 1851.

* In 1861 Cleveland got its own Post and Telegraph office.

* By the 1860s Cleveland was a small, rather unsuccessful port and settlement surrounded by farmland which was used mainly for growing sugar cane, fruit and vegetables.

* In 1868 the Cleveland State School was opened.

* In 1874 St Paul's Anglican Church was dedicated. It was the first church in Cleveland.

* The railway arrived in 1889 and this encouraged the rapid development of the town as a holiday destination. The railway station remained the centre of the town until the 1940s.

* Today Cleveland is the main access point for ferries to North Stradbroke Island. To the south is Redland Bay with ferry services across to Macleay, Lamb, Russell and Karragarra Islands.

The local council website has a lot of information about Cleveland. Check out http://www.redland.qld.gov.au/. 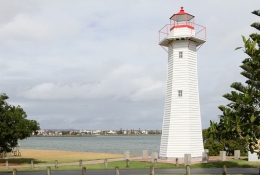 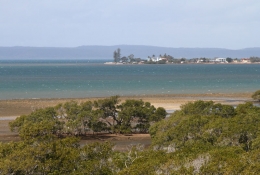 The view across to Cleveland Point from the gardens of Ormiston House. 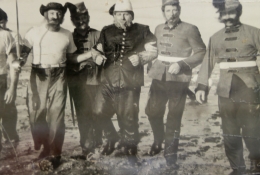 An old photo of the re-enactment of Governor Gipps arriving at Cleveland. 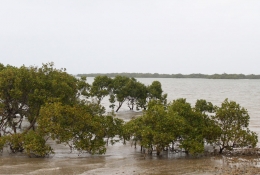 The amusing reason Cleveland never became Queensland's capital - Governor Gipps sank up to his waist in these mangrove mudflats. He was not impressed. 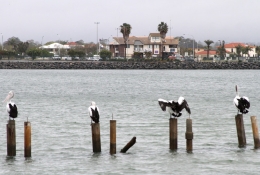 Pelicans in the rain looking across Raby Bay from Cleveland Point. 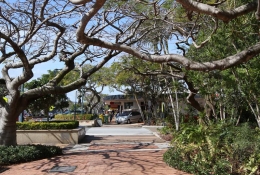 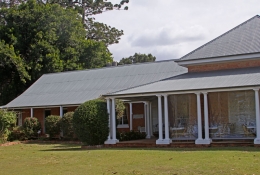 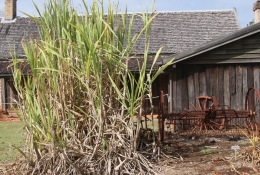 A clump of sugar cane behind Ormiston House - a reminder of its place in Australia's sugar industry. 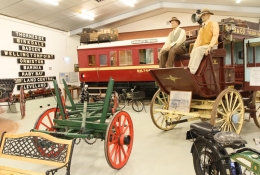 Part of the exhibition at Cleveland's excellent and extensive Redland Museum 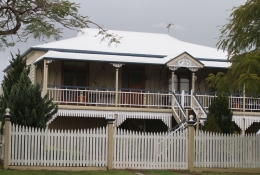 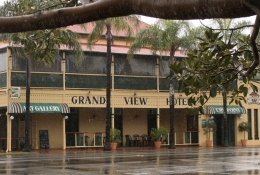 The Grand View Hotel claims it has been in this location since 1851 making it one of Queensland's oldest hotels. 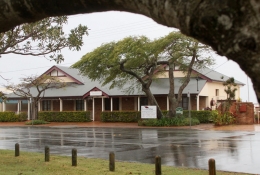 Cassim's Hotel dates from around 1860 but has not been used as a hotel since the 1920s. 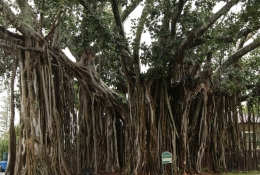 Reputedly Australia's largest banyan tree on the road out to Cleveland Point. 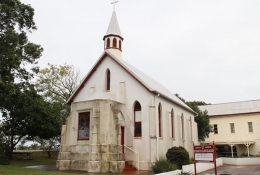