Quiet town on the Darling Downs.

Clifton is a small rural township bisected by a railway line. It is a quiet and peaceful service centre for the surrounding rich and prosperous agricultural area where the economy is dominated by cattle, cereal crops, sunflowers and honey. The town has been used as a setting for a number of movies including, most famously, the 1983 TV miniseries, The Thornbirds, starring Richard Chamberlain and Rachel Ward.

Clifton is located 158 km south-west of Brisbane via Gatton and the Gatton-Clifton Road, 44km north of Warwick, 56 km south of Toowoomba and 437 m above sea-level.

It is claimed that when James M Marsh purchased land between Clifton and Nobby in 1843 he named the property Clifton, after a town in England (there are over sixteen towns named Clifton in England) which was his birthplace.

Clifton Historic Museum
The town's museum is housed in the old butter factory in King Street. There was a butter factory in the town as early as 1908 but this handsome and substantial brick building was completed in 1933 and produced butter until it closed in 1966. Around that time the local economy shifted from dairy produce to grain growing. The museum was opened in 1988 and is a typical vernacular rural museum with highlights including a 1930's early hospital ward, and some interesting movie memorabilia. The bricks for the museum were manufactured in Toowoomba and transported by rail to Clifton.
NB: Clifton Museum is temporarily closed due to structural cracks in the main building of the old Butter Factory. We thank our many visitors over the last 28 years and hope to see you all again. Our research department continues to open on the 1st, 3rd, and 5th Sunday of each month, from 10am to 3pm.

Heritage walk
A number of local shops, and the Visitor Centre at the Railway Station, have a Heritage Walk brochure which highlights the towns points of historic interest and buildings dating from the 20th century. Of particular interest are the New Tivoli Picture Theatre which was built in 1911 and converted into a picture theatre, with sloping floor and canvas seats, in 1938. It is still possible to sit in the canvas seats and roll Jaffas down the aisles.

Nobby
Located 10 km north of Clifton is the tiny village of Nobby which is famous as the resting place of Sister Elizabeth Kenny, a hugely controversial but fascinating nurse who created an unorthodox, but often successful, treatment for polio during the 1930s.

Kenny's story is fascinating. She became a nurse in 1911 and early in her career worked in outback Queensland where she nursed a number of children suffering from poliomyelitis or infant paralysis. At the time the standard cure was to place the children in plaster or splints. Kenny disagreed and argued that the deformities caused by polio could only be cured by exercise. In 1933 there was another outbreak of polio in Queensland and Kenny established a clinic in Townsville where she could test her theory. The results were impressive. She received government funding and more clinics using her methods were established in Victoria and New South Wales. The medical profession dismissed her as 'a quack' and in 1938 a Royal Committee backed the medical profession found that Kenny's refusal to use splints was 'a grievous error and fraught with grave danger'. Kenny left Australia and continued her work in the United States where she was widely praised and admired. She returned to Australia, died in Toowoomba on 30 November 1952 and is buried in the Nobby cemetery. Her grave can be located on the left rear corner of the cemetery which can be found along the Mt Kent boundary road (an extension of Comerford Street) which heads west from just north of Steele Rudd's Pub. Ask at the pub for access to the Sister Kenny Museum which contains lots of information and memorabilia about this remarkable local.

Steele Rudd's Pub
This is Steele Rudd country and it is not surprising that the old Davenporter Hotel in Nobby's main street, which was built in 1893, was renamed Rudd's Pub in the 1980s. Arthur Hoey Davis, who adopted the nom de plume Steele Rudd, was a humorist who wrote the famous Dad and Dave stories. He lived in Nobby for some years and folklore says that he used to sit in front of the fire place in the Davenporter Hotel's Heritage Room and write. The hotel has photographs, farming equipment, bottles, kitchen utensils, books, and other memorabilia typical of a rural folk museum. For further information check out http://www.ruddspub.com.au.

* Before the arrival of Europeans the area around Clifton was inhabited by the Aboriginal Keinjan language group.

* Like many Darling Downs townships, Clifton came into existence in the early 1840s when the government allowed settlement to occur relatively close to the penal colony at Moreton Bay. The first settlers were Joseph King and John Sibley who lived in a bark humpy on the bank of Kings Creek, halfway between Clifton and Nobby

* In 1868 the area was opened up for closer settlement and in 1869 the railway from Toowoomba provided good access to the sea. This led to the creation of the town of Clifton which, at the time, amounted to nothing more than a hotel, the railway station and a couple of stores.

* The township was surveyed and lots sold in 1875. A school was opened the following year and by 1888 te town had both Catholic and Church of England churches.

* The town prospered between 1890 and1920 with the success of the local wheat and dairy industry. Dairy factory opened in 1908. Tivoli picture theatre in 1921.

* Dairy factory closed in 1966. Town became a popular place for workers commuting to Toowoomba and Warwick to settle their families.

* In 1972 passenger trains stopped running for the railway station and in 1998 the station was closed for goods trains.

The Clifton and District Progress Association website (http://www.cliftonpa.org) has lots of detailed information about the town. Also check out http://www.toowoombaholidays.com.au/destinations/clifton and for historic information the Queensland University website http://queenslandplaces.com.au/clifton is useful. 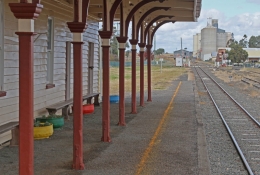 The Old Railway Station - now the information centre - at Clifton. 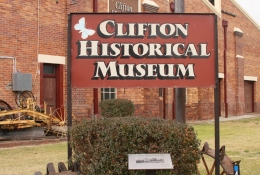 The Clifton Museum in the old town Butter Factory. 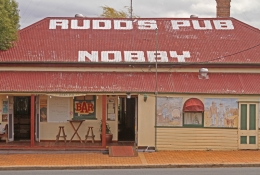 Rudd's Pub - named in honour of the author Steele Rudd. 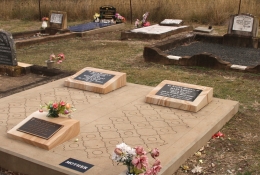 The grave of Sister Elizabeth Kenny at Nobby cemetery.