Coalcliff is a picturesque village perched on steeply sloping ground and sandwiched between the Pacific Ocean and the sheer cliffs of the Illawarra escarpment. Previously a quiet mining village, it was often cut off from direct access to Stanwell Park and Sydney by rockfall. In December 2005 that changed when the remarkable Sea Cliff Bridge was opened. Not only is the bridge a remarkable engineering achievement but it also is aesthetically pleasing as it winds around the rugged coastline. In recent years it has become popular with commuters to Sydney. Access is by electric train from the Coalcliff station. It has a small beach (formerly Coalcliff Harbour), an impressive rock pool and a rock shelf which is popular with anglers and walkers.

Coalcliff is located 62 km south of Sydney via the M1 (F6) and Stanwell Tops or 73 km via the scenic route through the Royal National Park. It is  24 km north of Wollongong and 11 km north of Thirroul.

Not surprisingly, given its origins as a coal mining town, Coalcliff is named after the first mining company in the area. A future premier of NSW, Alexander Stuart, bought land in the area in 1876 and the rather unimaginatively named Coalcliff Mining Company commenced operations in 1877.

Coalcliff Beach
Coalcliff has a small beach edged  by rock platforms. It is located at the end of a short, unnamed road which runs off Lawrence Hargrave Drive about 400 metres north of Sea Cliff Bridge - the next road north after Paterson Road.  The road has a small blue signpost reading 'Coalcliff SLSC.'

Rock Pool
Paterson Road, just south of the access to the Coalcliff Beach, provides access to a children’s play area and a delightful small rock pool which fills tidally and is edged by the Pacific Ocean while offering views down to the coast to Sea Cliff Bridge.

Clifton
Clifton is a small ex-mining hamlet with two interesting buildings.  The former Clifton School of Arts (1911), is a two-storey brick structure in a Federation Free Classical-style and is built on land donated by the Clifton Mine for the creation of a learning facility.  When completed it boasted a reading room, a general store and a billiards room. Later it was used as a post office, an electoral office, a caretaker’s residence, a shop and a venue for local dances.  It is now held in trust by local residents.

Nearby is the Clifton Hotel with its doorways and windows sadly boarded up. An hotel (the Imperial) was licensed on this site in 1884.  Resch’s Brewery Limited purchased the hotel in 1910, knocked it down and built the present two-storey brick structure in 1911.  It was renovated  in the 1970s but the closure of the road between Clifton and Coalcliff during the Sea Cliff bridge’s construction, saw the hotel close in 2003. It is yet to reopen. Check http://www.wollongong.nsw.gov.au/library/onlineresources/suburbprofiles/pages/clifton.aspx for a detailed history of Clifton

South of the Bridge
The drive south from Sea Cliff Bridge is a delightful journey through some particularly beautiful and tiny old mining villages. This area is in transition and consequently the traveller will marvel at old fibro holiday homes and miner's cottages cheek-to-jowl with million dollar mansions with spectacular views over the Pacific Ocean.  The road is narrow and winding and passes through villages which stretch from the sea up the escarpment.

* In 1868 Coalcliff was opened up to Wollongong when a bush road called Clifton Road was cleared north from the bottom of Bulli Pass.

* The railway line from Sydney to Wollongong was completed and the first train ran on 7 September, 1888.  It included a railway tunnel at Coalcliff which required 3 million bricks to line. That same year the North Clifton Railway Station was opened at Coalcliff.

* 1891 - the Illawarra Coal Company opened a mine at Clifton.

* In 1903 South Clifton was changed to Scarborough to avoid confusion.

The Wollongong region has two major visitor information centres. The first is located at Bulli Tops just off the Princes Motorway, is known as the Southern Gateway Centre and can be accessed by either going to http://www.southerngatewaycentre.com.au/ or tel: 1800 240 737. The second, known as the iHub Centre is at 93 Crown Street and can be accessed by going to http://www.visitwollongong.com.au/ or tel: (02) 4267 5910. Both these information centres can help with information about Coalcliff.

The Wollongong Library site offers a detailed history of the town. Check out http://www.wollongong.nsw.gov.au/library/onlineresources/suburbprofiles/pages/coalcliff.aspx 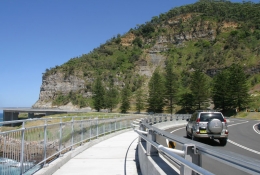 The walkway on the Sea Cliff Bridge. 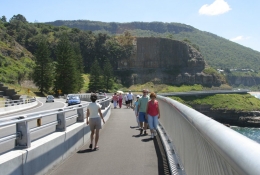 Sunday is a popular walking day on Sea Cliff Bridge. 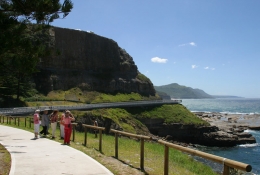 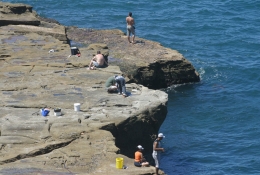 Fishing from the rock platform below Sea Cliff Bridge. 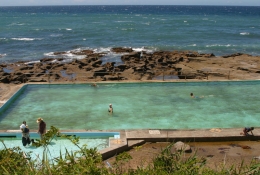 The rock pool just to the north of Sea Cliff Bridge. 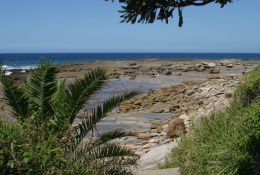 The rock platform, ideal for walking and fishing, below Sea Cliff Bridge.