Rural service town known as the Dairy Capital of the World

Cobden is surrounded by low lying hills. It is primarily a rural service town in a closely settled dairying district. The chief appeal of the area lies to the south of the town where the famous Twelve Apostles and the Great Ocean Road are major tourist attractions.

Cobden is located 204 km south-west of Melbourne via Cressy and Camperdown. It is 40 km north of Port Campbell and the Great Ocean Road.

The town was initially named Lovely Banks but was changed in 1865 because there was already a Lovely Banks in Victoria. It was named after Richard Cobden (1804-1865), a British politician and advocate of free trade.

Cobden Miniature Railway
Located in the Cobden Miniature Railway Park, Grayland Street, the miniature railway operates from 11.00 am - 4.00 pm on the third Sunday of each month. The track, which is 1.8 km long and includes a trestle bridge, two tunnels and an underpass, is part of a larger children's area which includes mini golf, picnic facilities and a children's playground. For more information tel: (03) 5593 2362 or check out http://www.cobdenminiaturerail.org.au.

Cobden Pioneer Park
Located in Grayland Street, the Cobden Pioneer Park, which is located adjacent to the Miniature Railway, aims to "to preserve the history of the Cobden and Heytesbury region which is strong in dairy, timber and general agriculture. Authentic buildings have been moved to the site and others have been faithfully re-created to show how the pioneers of our district lived and earned their livelihood." Check out http://cobden.org.au/location/cobden-pioneer-park for more information. It is open from 11.00 am - 4.00 pm on the third Sunday of each month.

Cobden Lake
Located off Shenfield Street, Cobden Lake (also known as Lake Cobden) is a former dam surrounded by trees, lawns and picnic facilities. There is a walking track around the lake which passes three plaques - one to Alma MacDonald (a tireless local volunteer); one to the Cobden Angling Club; and one to Tom and Ida Webster who were active in the local St John Ambulance. It is possible to fish from the jetties and to go canoeing and kayaking. Check out http://cobden.org.au/location/lake-cobden for more information.

Lake Elingamite
Located 8 km south-west of town, Lake Elingamite is a popular picnicking, boating and fishing spot with barbecue areas and a ramp for launching boats. Numbers of waterbirds including ibis, black swans, gulls and spur-wing plovers live around the lake. It is clearly signposted off the Cobden-Warrnambool Road 4 km west of Cobden. It is a fascinating volcanic crater which has been filled with water. The Agriculture Victoria website (check out http://vro.agriculture.vic.gov.au/dpi/vro/coranregn.nsf/pages/corangamite_eruption_points_ellingamite#) explains that it is "a classical example of a simple maar or “Pulvermaar”. It displays different topography from other small maars with the even rim and steep inner cliffs and that it is "an almost perfectly circular maar 2 km in diameter which is completely enclosed by a tuff ring. The tuff ring rises to 15 m on the eastern side as a narrow ridge but on the west of the lake is lower and broader. The inner edge of the tuff ring is steep. This is unlikely to be an initial explosion or collapse slope but rather a fossil cliff line eroded by wave action at higher lake levels."
A maar, as explained by http://geology.com, is "a shallow volcanic crater with steep sides that is surrounded by tephra deposits. The tephra deposits are thickest near the crater and decrease with distance from the crater. A maar is formed by one or more underground explosions that occur when hot magma comes into contact with shallow ground water to produce a violent steam explosion. These explosions crush the overlying rocks and launch them into the air along with steam, water, ash and magmatic material. The materials usually travel straight up into the air and fall back to Earth to form the tephra deposits that surround the crater. If the tephra lithifies, it will become an igneous rock known as tuff."

Jancourt Forest
Located 20 km south east of Cobden (via the Cobden-Stoneyford Road) is Jancourt Nature Conservation Reserve which is a remnant of the Heytesbury Forest which once separated the plains at Cobden from the coast. There are forest drives and walking trails in the forest.

* Prior to European settlement the area is thought to have been occupied by the Kuurn Kopan Noot Aborigines.

* The 'Tandarook' property, one of the first to be established on the western plains, was set up in 1840 by pastoralist Dr Daniel Curdie.

* Cobden was surveyed in 1860 and named Lovely Banks.

* Cobden township was established in the early 1860s.

* In 1888 Cobden opened the first butter and cheese factory in Victoria.

* The railway from Camperdown reached the town in 1892.

* In 1924 the town received reticulated electricity.

* After World War II more than 43,000 ha of Heytesbury Forest was converted into dairy farms.

* Today Cobden is known as the Dairy Capital of the World. It has over 140,000 head of cattle in the district. The Fonterra Co-operative Group operates the largest milk drying plant in Australia.

There is a useful local website. See http://cobdenvictoria.blogspot.com.au/. There is an excellent guide book on the entire coast. Check out http://www.rodneyhyett.com.au/great-ocean-road-guide-book.html for details. 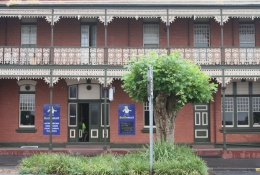 Intricate lacework on the Thompsons Hotel 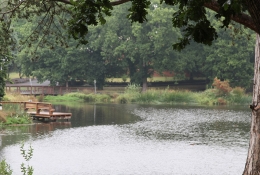