Cobram, located on the southern banks of the Murray River, is the twin with the New South Wales town of Barooga. Described as 'Peaches and Cream Country' the area surrounding the twin towns is known for its apricots, nectarines, peaches and pears as well as its dairy grazing properties. The district is well known also for its olive oil from Cobram Estate and the Murray Goulburn Cooperative, formed in 1950, supplies in excess of two million litres of milk each day. The appeal of the town is summed up perfectly by the Cobram-Barooga website when it explains:  “Visitors are captivated by the lifestyle, with wide sandy beaches, towering gums and native bushland which blend together to create this unique holiday destination … Australia’s largest inland beach, Thompson’s Beach, is easily accessible from the centre of town and is a great spot to soak up the tranquillity of the river, meet for a BBQ or picnic and have a hit of beach volleyball or cricket … it is a magnet for holiday makers – golfers, anglers, campers, swimmers, kayakers and water skiers all come to enjoy this piece of paradise. Discover the region using bikes, boats and canoes, or simply stroll through the bush and drop in a fishing line.”

Cobram, which is 113 metres above sea level, is located 261 km north of Melbourne.

Cobram was the name given to a pastoral station settled by Octavius Phillpotts in 1845. It is believed that Philpotts took the name from an Aboriginal word, probably a Waveroo word, meaning "head". Cobram was the head pastoral property in the district.

Log Cabin
Located opposite the roundabout in Punt Street which is opposite the Cobram-Barooga Visitor Information Centre, and adjacent the railway station (1888), is a log cabin which was originally erected in the Yarrawonga district as a home for the Toms family c.1875. It was moved to the present site in 1977. For more information tel: (03) 5872 2132.

Cobram's Historic Buildings
Cobram was established as a significant town in the 1880s as a result of the arrival of the railway. Consequently most of the town's important historic buildings date from that period. The Masonic lodge, located at the south-eastern corner of Main and Station Streets, was built in 1888 as a store. Over the road from the Visitor Information Centre is the Cobram Hotel which dates from 1892. At the south-eastern corner of Station and Queen Streets, hidden behind a fence and bushes, is one of the town's oldest houses (1887) which was built for James Grant who was the co-owner of a successful foundry which was located on the corner of Station and Oak Streets.

The Murray River Beaches
There are a total of 103 beaches along the Murray River between Yarrawonga and Tocumwal. Not surprisingly, visitors are drawn to these large sandy beaches, unusual alongside an inland river, which have a backdrop of red-gum forest and abundant wildlife. There are over 90 species of birds in the area. The reserves along the river are ideal for camping, bushwalking, cycling, fishing, swimming, bird watching, canoeing, water skiing and boating. There is a website - http://www.cobrambarooga.org.au/about/river-beaches/nsw-access.html - which provides detailed information on all the beaches and access points to the river. The most famous beach in the area is Thompson's Beach which is accessed via Mookarii Street. It is a beach on a bend in the river and it has a play area and barbecue facilities. It is floodlit in the evening and has fine stands of red river gums. Dead River Beach is just to the north-west of town along a track which heads off Racecourse Road. There are picnic areas to the north at Big Tom's and Little Tom's Beaches (access via Wondah Street). To the east of town are Scotts Beach, Horseshoe Lagoon and Twin Knobs Beach.

Quinn Island Wetland Sanctuary
Located off River Road, Cobram (turn onto River Road) Quinn Island Wetlands Sanctuary is a 40 ha island formed by a bend in the Murray River. A bridge crosses to the island and can be accessed from the parking area 100 metres to the west of the Quinn Island access point. A trail winds its way through River Red Gum and Silver Wattle Forest, including access to a bird hide that overlooks a billabong. A variety of native birds and animals can be spotted on Quinn Island. When it is wet the island is a haven for water birds. For more information check out http://www.cobrambarooga.org.au/companies/236/31/Quinn-Island-Wetland-Sanctuary.html#/None. Tel: (03) 5872 2132.

Strawberry Picking
The area around Cobram is known for its strawberries. Probably the best place to start is The Big Strawberry at Koonoomoo, north-west of Cobram, which is located at 7034 Goulburn Valley Highway and is open from 8.00 am - 5.30 pm seven days a week. It offers a range of strawberry products including jams, strawberry pancakes and a year round supply of fresh strawberries. Check out http://www.cobrambarooga.org.au/companies/231/30/The-Big-Strawberry.html#/None or tel: (03) 5871 1300.

Cactus Country
Located at 4986 Murray Valley Highway, Strathmerton (13 km west of Cobram) this unusual attraction covers 4 ha (10 acres), has been operating for over 25 years, and is recognised as Australia's largest cactus garden with literally thousands of cactus plants. It open seven days a week from 9.00 am - 5.00 pm. Check out http://www.cactuscountry.com.au/ for more details.

Bushwalking along the Murray
Cobram Regional Park covers 470 ha of land on the banks of the Murray River. It is notable for its river beaches, its superb stands of Red River Gums and a wide range of excellent walking tracks of which the most popular is the track which links Cobram with Scotts Beach and Quinns Island. For more information check out http://parkweb.vic.gov.au/explore/parks/cobram-r.p. There is a useful map which can be downloaded at http://parkweb.vic.gov.au/__data/assets/pdf_file/0003/630507/Cobram-RP-map.pdf.

Fishing in the area
Fishing in the Murray River around Cobram is hugely popular. Anglers are drawn to the area to fish for Murray cod, trout cod, golden perch and freshwater catfish. The river at this point is famous for small (3 kg) Murray cod. There are restrictions and laws controlling fishing. Check out the rules with the Visitor Information Centre.

* This is an area which was once occupied by members of the Bangerang, a subgroup of the Waveroo Aboriginal language group.

* Charles Sturt explored the Murray River downstream of the present townsite in 1830.

* In 1838 Sturt led a droving party with 300 head of cattle through the district, en route to South Australia. He was impressed with the fertile soil, rich natural resources and reliable water supply.

* Cobram station was taken up in 1845 by Octavius Phillpotts.

* The Land Acts of the 1860s opened up the district to small landowners.

* The small landholders had settled the area by 1872.

* A small settlement comprising a store, post office and school was in existence by 1880.

* In 1886 locals lobbied for the extension of the railway into the area. The railway terminated short of the government-owned land which was going to be developed for the town. This accounts for the town's unusual street pattern. The site was chosen by a surveyor, and the selector who owned the land in question broke it up into town lots which went on sale in 1887.

* The rail terminus was to be on private land owned by John Stewart who announced the sale of part of his estate for town lots. The 150 blocks were subdivided north-south whilst the railway entered the town at an angle, therefore creating two triangles and giving Cobram its unusual appearance.

* By t888 the town had hotels, a school, a doctor, a foundry, banks, a cordial factory, stores, churches and a newspaper.

* The railway signalled the decline of the paddle steamer trade on the river.

* A punt service across the Murray River was established in 1889.

* In 1892 a local farmer constructed a windmill to draw river water for the irrigation of his orchard. It was the first example of controlled irrigation in the district.

* The first bridge across the Murray was opened in 1902.

* In 1915 a pumping station was built to irrigate several local properties.

* At the end of World War II the government decided to establish a major soldier settlement scheme in the district.

* Italian immigrants arrived in the district after 1945, irrigation increased and many dairy farms and orchards were established.

* In 1949 the Soldier Settler's League formed the Murray-Goulburn Co-operative for the manufacture and marketing of their dairy produce. It became the largest organisation of its type in the world and it is now one of the state's largest milk producers.

There is an excellent local website. Check out http://www.cobrambarooga.org.au. 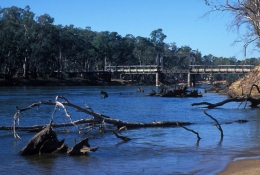 The old bridge (now superseded by a modern concrete bridge) which crossed from Cobram to Barooga. (Pic taken 1990) 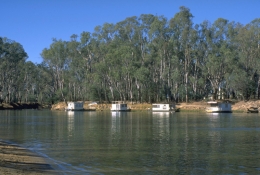 Houseboats on the Murray River near Cobram. 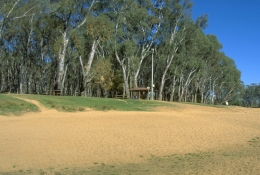 Thompson's Beach - the most impressive of the 103 beaches in the area. 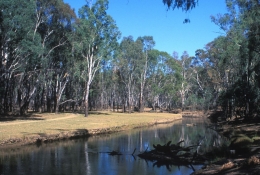 A cycleway-walkway through the gums along the banks of a Murray River backwater. 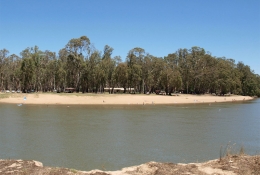 Thompson's Beach, reputedly the largest beach on the Murray River.