Cocklebiddy is a roadhouse with accommodation, a caravan park, a restaurant and service station serving the needs of travellers crossing the Nullarbor Plain. It has very little rainfall and no reliable sources of water. Consequently, although it has huge underground lakes, it relies on saline waters and a desalination plant. The main attractions in the area are the Eyre Bird Observatory, which offers regular courses on birdwatching and is run by Birdlife Australia, and the Cocklebiddy Caves which are considered the longest caves on the planet.

Cocklebiddy is located 1157 km east of Perth and 438 km east of Norseman via the Great Eastern and Eyre Highways. It is 66 km east of Caiguna, 91 km west of Madura and 1,538 km west of Adelaide.

No one knows what Cocklebiddy means. It was first applied to an Aboriginal mission which existed in the area. It can reasonably be assumed to be a word from the Mirning Aboriginal language.

Cocklebiddy Caves
Cocklebiddy is famous for the fact that it reputedly has the longest cave in the world - a cave which is over 6 km long. However over 90% of the cave is underwater. In August, 1983 a French team of speleologists set an underground record in the Cocklebiddy Caves  when they made the longest cave dive in the world.
The entrance chamber is over 300 metres long and leads to a  straight tunnel. The website Deep in the Dark explains: "From the entrance lake the first sump is about one kilometre length to the air-filled Rockfall Chamber. Dive gear must be transported over the Rockfall Chamber to the second sump, which is 2.5 kilometers in length. The second sump leads to another chamber named Toad Hall. Dive gear must be carried across Toad Hall to reach the third and final sump, which is 1.8 kilometres in length."
For details of how to get to the caves, which are only 5 km from the settlement, ask at the roadhouse. There is a video of entering the cave at http://deepinthedark.com/cocklebiddy-cave. Clearly it is for experts only. There is also an excellent account of the experience at http://www.divernet.com/cave-diving/p302435-beyond-toad-hall.html.
The caves are not easy to find. They are not really for the casual traveller. They are located 10 km west of Cocklebiddy (there is a parking bay) and then they are 10 km from the Eyre Highway. The sensible way to find them is to ask for specific directions at the Cocklebiddy Roadhouse.

Hole 10: Cocklebiddy Eagle's Nest Par 4 and is 347 metres.
Located at the back of the Cocklebiddy Motel this is a pleasant, uncomplicated Par 4 which is straight, dotted with low lying scrub (you could be unlucky) and, mercifully, has a relatively large astroturf green.

Robbie’s Guide to the Nullarbor Links
Cocklebiddy – Eagle’s Nest
A straight Par 4 of 347 metres. The first 200 metres of the fairway is scattered with small shrubbery, but it is rock free and flat. Short of the green is the best on approach.
The notes on the website explain: "Cocklebiddy lies on the southern edge of Western Australia's vast sheep grazing belt. Within the area are several large scale sheep grazing operations, some larger than a number of European countries. With limited rainfall sparse stocking rates of about 8 to 10 sheep per square kilometre are the norm. During its pioneering years Cocklebiddy was the site of an aboriginal mission. Today, however, all that remains of the mission are its stone foundations. In recent years Cocklebiddy has gained an international reputation as a site for one of the world's largest cave systems. Ten kilometres to the north west of Cocklebiddy Roadhouse lies Cocklebiddy Cave. In 1983 a French caving expedition created history by exploring the cave to an unprecedented distance of 6.4 kilometres. This record was later broken in 1995 by Australian Christopher Brown - bettering the 1983 record by a mere 20 metres. Cocklebiddy cave system is unique in that the cave system extensively penetrates an aquifer that lies 90 metres below the Nullarbor Plain. Within Cocklebiddy cave are a number of vast limestone caverns, rockfalls and saline subterranean lakes that extend for several hundred metres." The tee is called the Bindy after Bindy Seivwright who has been carrying BP fuel across the Nullarbor since 1983.

It was developed in 1976 when the Western Australian Government created the Nuytsland Nature Reserve, a 400,000 ha nature reserve. The Eyre Telegraph Station was one of the few buildings in the area. The Royal Australian Ornithologists Union saw the building as an ideal wildlife bird observatory. Today the telegraph station has been restored and it houses both a Post Office Museum (recalling the telegraphic history of the building) and the Eyre Bird Observatory. Surrounded by mallee scrub the observatory has studied the birdlife of the area for decades and has recorded over 230 different species including rare migratory birds like red-necked stints and ruddy turnstones which travel over 10,000 km from Siberia.

The observatory was opened in 1978 and has facilities for overnight basic accommodation and camping. It is possible for drivers of 2WD vehicles to be collected from the Cocklebiddy roadhouse by the wardens at the observatory. Telephone the observatory: (08) 9039 3450 for more details. All necessary information is available on their website: http://www.birdlife.org.au/visit-us/observatories/eyre

Twilight Cove
South of Cocklebiddy, and only accessible by 4WD (ask at the roadhouse for directions), is Twilight Cove, one of the many highlights of the Great Australian Bight. Here the cliffs are up to 80 m high. They were produced by marine sediments laid down over millions of years when ancient, shallow seas flooded the Eucla Basin.

* In 1877 the first Eyre Telegraph Station was built.

* In 1897 the current Eyre Telegraph Station was opened. It remained an important part of the nation's communication network until it was closed in 1927.

* In 1978 the Eyre Bird Observatory was opened. 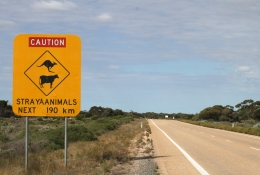 Add an "A" and turn a warning into a droll outback joke. 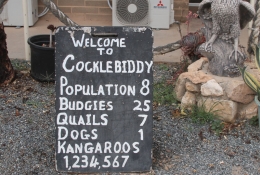 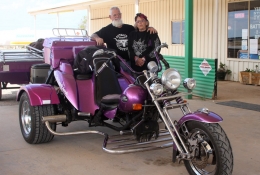 Crossing the Nullarbor in motorbike comfort. 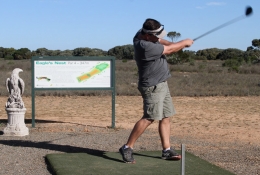 Teeing off at the Eagles Nest hole. 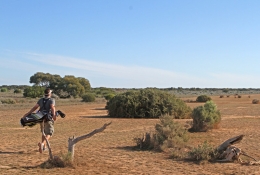 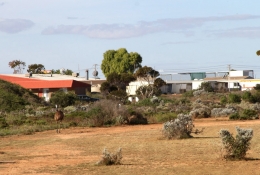 An emu wandering around on the edge of the fairway at Cocklebiddy. 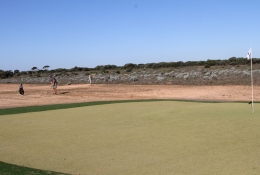 Chipping for par on Eagles Nest at Cocklebiddy.