Rural service centre on the Gunbower Creek, an anabranch of the Murray River

Cohuna is a charming rural service centre which is located on the banks of the Gunbower Creek. Its major attractions relate to the creek which provides still waters for water sports and, with the Torrumbarry Irrigation System, is vital for the local agriculture. The Garden Park, near the Visitor Centre, is an ideal place for a picnic. There is a pleasant short walk around a section of Gunbower Island and, for those wanting more extended bushwalks with excellent opportunities for bird watching, there is both Kow Swamp and Gunbower Island.  Gunbower Creek is an anabranch of the Murray River. Located between the creek and the Murray River, which lies 8 km to the north, is Gunbower Island. Cohuna is the main access point to the island's many attractions.

Cohuna is located 276 km north of Melbourne and 80 m above sea-level.

There is an argument that "cohuna" is a rough English equivalent of a local Aboriginal word meaning "brolga".

Walking Path
There is a pleasant 2.6 km walking track, clearly signposted near the Visitor Information Centre, which crosses the Cohuna Weir and continues along the banks of the Gunbower Creek passing around both Cohuna Oval and the Second Oval.

Cohuna Weir
There is a very detailed sign beside the weir which tells the entire story of the Torrumbarry Irrigation Area. The relevant section notes: "The current Cohuna Weir was constructed by Goulburn-Murray Water in 2005. The Cohuna Weir maintains a creek level to allow water to gravity irrigate surrounding farm lands.
"The three control gates on the weir were designed, manufactured and installed by the local company AWMA Pty Ltd. The head and discharge gates are in effect two gates in one. The upper section of the gates can be lowered to allow water to flow over the top of the gate during normal operation. During high water use periods the lower section of the gates can be raised allowing water to be released under the gates. The gates are remote controlled via radio links from Goulburn-Murray Water offices in Cohuna and Kerang. The original Cohuna Weir consisted of eight bays. The new design accommodates for the same water flow utilising only three bays.
* Normal flows during irrigation season up to 900 Megalitres per day.
* Peak capacity of Weir 1500 ML per day.

Water Tower
Standing proudly beside the creek, the current water tower was erected in 1912. Before that date John McKenzie King was paid £40 a year by the shire to pump water to the town. In 1967 a purification plant with an elevated storage tank was installed.

Cohuna & District Historical Museum
Located on Sampson Street in the former Scots Presbyterian Church is the Cohuna and District Historical Society Museum. Its exhibits include household items and memorabilia of the district, including a portion of a tree marked by Thomas Mitchell in 1836 on what was the first journey by Europeans into this part of the country. There is also a separate brick building - the Archives Building - housing archives and photographs. The museum is open on Mondays between  10.00 am and noon or by appointment, and the Archive and Photographic Collection is open Fridays from 1.00 pm - 4.00 pm, tel: (03) 5456 7332. For more information check http://members.cybanet.net.au/cdhs.

Gunbower Island
Gunbower Island is a 26,400 ha island which lies surrounded on the south by Gunbower Creek and to the north by the Murray River. It is 50 km long and, as such, is Australia's largest inland island. It extends from Koondrook to Torrumbarry Weir and Lock 26. The island is characterised by swamps, river red gums and, on the higher ground, box forest. It is known to have over 200 bird species and it is home to a wide range of native mammals, amphibians, fish (notably the Murray Cod, Golden Perch and Redfin) and 24 different reptiles. Visitors can canoe down the Gunbower Creek (there is a 5 km canoe trail), walk and wander across the island, take a motorbike along the tracks or traverse the island by 4WD.
It is believed the island was originally inhabited by eight clans of the Barababaraba Aborigines. If you look carefully you will still see signs of their settlement. There are mounds and middens of shells and bones and many of the trees are still scarred. Their diet was a combination of yabbies, grubs, fish and flour made from Nardoo and turned into damper.
It wasn't until the 1870s that Europeans realised the value of the river red gums, particularly for railway sleepers, and timber cutters started camping on the island and cutting down the trees and transporting them to the nearby mills. At one point towards the end of the 19th century the population was sufficiently large to set up a school on the island. Today it is recognised as a significant wetland.
Visitors can expect to see grey kangaroos, wallabies and emus. More rare are such wonders as the Barking Marsh Frog, Broad-Shelled Tortoise and White-Bellied Sea Eagle. For drivers the Gunbower Forest Drive (entry from Cohuna) offers an excellent overview. There is a detailed brochure - Gunbower Forest Walks and Drives - which is available at the Golden Rivers Country Visitor Information Centre in Barham. Most of the information can also be accessed by going to http://www.dse.vic.gov.au/ and searching for Gunbower Island.

Kow Swamp
Located 16 km south of Cohuna, Kow Swamp is an important wetland where finds of world importance have been made. In the late 1960s more than 22 human skeletons, dating between 6,500 and 13,000 BP, were discovered in a prehistoric burial site. Remarkably, the skulls possess archaic physiological features which predate those of modern humans. For a detailed description of the site check http://www.peterbrown-palaeoanthropology.net/KowS.html. The wetlands support many waterbird communities and are popular with anglers. To reach Kow Swamp from Cohuna head towards Echuca on the Murray Valley Highway for about 8 km then turn right into Pipers Road. After about 6 km you will come to a T-intersection at the north-western corner of Kow Swamp. Turn right onto Pyramid Hill Road. After about 50 m there is a cleared area on the left at Box Bridge where you can stop for a picnic.

Mount Hope
Located 27 km south of Cohuna is Mount Hope, a low lying granite outcrop which was climbed by the explorer Thomas Mitchell on 28 June, 1836. Mitchell named the low lying mountain because he hoped that he would see the sea from the mountaintop. There are picnic facilities and a Mitchell plaque at the base of the mountain and it is a short vigorous walk to the top where there are good views of the district and Kow Swamp. Check out https://www.bendigoregion.com.au/visit-loddon-valley/mount-hope-nature-conservation-reserve for more information.

* Prior to the arrival of Europeans the area was probably occupied by the Barababaraba people, part of the Yorta Yorta people.

* Major Thomas Mitchell passed through the area on his 1836 exploration of 'Australia Felix'.

* The Gunbower pastoral run was established in 1845.

* In 1874 the government opened up the area to farm selections.

* In 1875 the Cohuna village was proclaimed. That year saw the opening of the town's first post office.

* In 1877, as a result of drought, some farmers started irrigating from Kow Swamp.

* In the 1890s the area became popular with market gardeners.

* An Agricultural Society was established in 1911.

* In 1913 a newspaper, the Farmers Weekly, was published.

* The Cohuna Memorial Hall was opened in 1922. That year saw the formation of the Cohuna Shire.

* In 1924 the primary school became a higher elementary school.

* The myxomatosis virus made its first successful debut in local rabbit warrens c.1950.

* The Cohuna District Hospital was opened in 1952.

* The Cohuna and District Historical Society was formed in 1970.

* In the 1960s and 1970s Cohuna's casein factory's produce was part of the diet of the astronauts flying the Apollo space missions.

There is a useful local website. Check out http://www.cohuna.org.au. 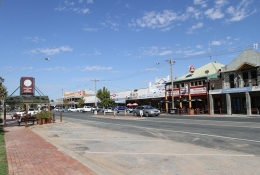 The main street of Cohuna 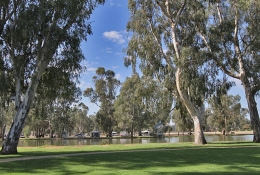 The Garden Park beside Gunbower Creek 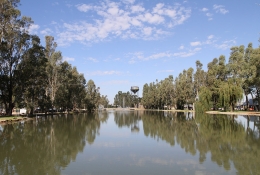 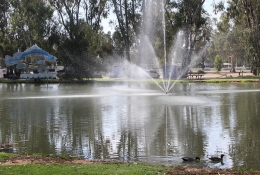 The Water Fountain and Fish Sculpture near Cohuna Weir 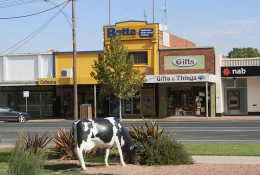 The cow sculpture outside the Visitor Information Centre 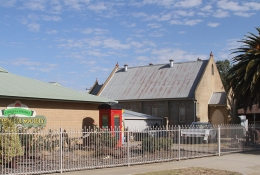