Coleambally may well be the friendliest town in Australia. Certainly there are few towns that can match its deeply supportive community. Is this because it is the newest town in New South Wales? It was officially opened in 1968 and celebrated its 50th Anniversary in June, 2018. Or is it because, with a population of only 600 people, everyone knows that the town will succeed if they all work together? It is the administrative, commercial and social centre of the Coleambally Irrigation Area, an area which began to be developed in the 1950s and which covers 87,600 ha. with rice being the principal crop though wheat, barley, corn, canola, soybeans, olives and almonds are also grown.

Coleambally is located 65 km south of Griffith and 638 km south-west of Sydney via the Hume and Sturt Highways and the Kidman Way.

It is believed that the word "coleambally" is a Wiradjuri word referring to the speed of the spine-tailed swift, a bird known to hunt for insects in the local area.

Bucyrus Class 3 Dragline
It is impossible to miss. As you enter Coleambally you pass the Lions Park and the huge Bucyrus Class 3 Dragline which is one of four machines that were imported from the USA in 1935 and used to excavate the main channels in the Murray Valley and the Coleambally Irrigation area. The huge machine was "walked" to Coleambally from Deliniquin following completion of the Mulawa canal. It started digging channels in the Coleambally district in 1958. In 1978 the machine was driven to its present site where it is a reminder of the scale of work involved in establishing the Coleambally Irrigation Area. It is still in working condition. The sign beside the vehicle offers the following specifications: Weight: 130 tonnes; Speed: 3 km/hr; Bucket Size: 4 cubic metres.

Wineglass Water Tower
Not only does the local water tower have the unique "wine glass" shape but it is decorated with a mosaic which has approximately 80,000 tiles. The mosaic depicts the history of the town and district.

Forest Walks
The town is located in a pine forest and there are a number of walking tracks through the pines, acacias, gum trees and saltbush. Over 80 different bird species have been sighted in the area. It is possible to see the rare Superb Parrot and Brolgas are drawn to the area during the rice season.

* Prior to European occupation the area was home to the Wiradjuri people for over 20,000 years.

* Work on the Coleambally Main Canal began in 1958.

* The town was officially opened on 27 June, 1968 with all streets being named after local birds. This year also saw the construction of the town's unique wine glass water tower.

* In 2008 the Coleambally Irrigation Area offered all the land around Coleambally for sale for $3.5 billion.

The Coleambally Visitor Centre is located in the Shire Office near John McInnes Square, tel: 1300 676 243. 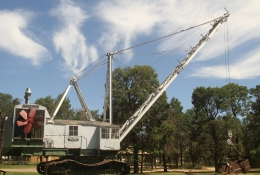 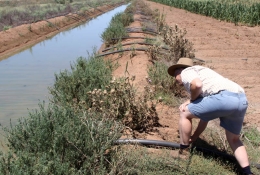 Irrigation pipes run from the main channel into a crop of corn. 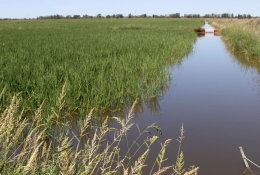 A rice paddy and irrigation channel near Coleambally 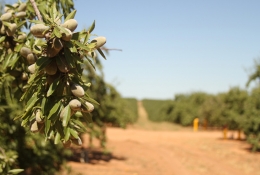 An almond orchard near Coleambally.