It seems as though every town, large and small, between Hobart and Launceston is a wonderland of Georgian and historically interesting buildings. Colebrook is not as large as Richmond, Oatlands, Ross or Campbell Town probably because it started life as a convict probation station and slowly evolved into a centre for the surrounding farming community. Today it has a few significant National Estate buildings and is well worth exploring.

Colebrook is located 53 km north of Hobart on the B31 between Richmond and Oatlands.

There are two explanations for the naming of Colebrook. It was originally named Jerusalem because on an expedition into the area in 1806 a certain Private Hugh Germain started giving places exotic names. It is claimed that Germain travelled through the area with a copy of The Bible and the Arabian Nights - thus Jerusalem is near Jericho and Bagdad. An alternative version claims Colebrook was named Jerusalem sometime before 1824 by Jorgen Jorgenson, a district constable, who claimed that the seven hills in the district reminded him of Jerusalem. During the administration of Van Diemen's Land by Governor John Frankin (1837-1843) the town's name was changed to Colebrook Dale which was officially reduced to Colebrook in 1894.

The Chimneys
The Chimneys, a National Trust listed building, started life as the home of the district constable in 1854. It became a convent and remained so until 1967 when it closed. After the bushfires of 1967 it became a Bed and Breakfast destination and today it is a private home. It is not open for inspection but from the outside it is easy to admire its original charm.

National Estate Buildings
The town has a number of National Estate buildings including the former Police Station in Richmond Street which is now a private residence. It is not open for inspection although it still contains two cells.

St Patrick's Roman Catholic Church
Located in Arthur Street St Patrick's is an interesting Gothic Revival church which was consecrated in January, 1857. There is a very detailed account of the origins of the church and its construction at http://www.puginfoundation.org/assets/Colebrook_Essay.pdf. The following quote highlights the uniqueness of the church. "St Patrick’s, Colebrook, was ... a scholarly and completely convincing, yet totally original, evocation of a small English medieval village church. The vocabulary of its elements establishes that it accurately reflected construction that would have originally been in vogue around the year 1320. In its plan form, composition and furnishings it conformed with Pugin’s exposition of what constituted ‘a complete Catholic parish church for the due celebration of the divine office and administration of the sacraments, both as regards architectural arrangement and furniture’. It comprised an aisled three-bay nave with antipodean north porch, a relatively deep separately expressed chancel, with a rood screen across the chancel arch, and a sacristy in the angle between the south aisle east wall and the chancel south wall."

* The district where Colebrook now stands was first explored by Europeans in early 1804. By 1806 soldiers were being sent to the district to kill kangaroos and emus because of a serious food shortage in Hobart Town.

* It is claimed that the infamous Tasmanian bushranger, Martin Cash, was incarcerated in the Colebrook Gaol but managed to escape and hide in a pear tree near the police station. It is probably untrue but is part of local folklore.

* In 1854 ‘The Chimneys’, one of the most important residence in town, became the residence of the district constable.

* By 1871 Hardwick Mill was grinding wheat but thirty years later it had been converted into a private home.

* Bushfires almost completely destroyed the town on 7 February, 1967 with the state school, post office, the Railway Hotel, the two shops and many homes being burnt to the ground.

* Craigbourne Dam was officially opened on 17 November, 1986. In the process Colebrook Park, a two-story Georgian sandstone house built in 1822, which would have been located under the rising waters was removed from its original site.

There are no dedicated websites for Colebrook. 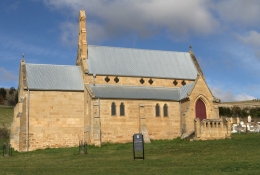 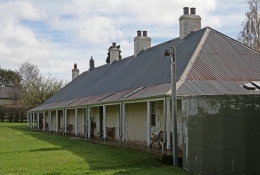 The Chimneys, a National Trust listed building, started life as the home of the district constable in 1854. 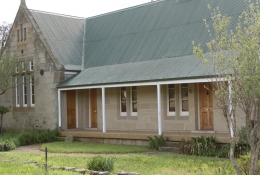 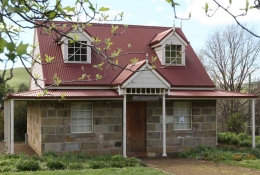