Town at the entrance to Freycinet National Park.

Coles Bay is situated at the northern edge of the Freycinet National Park and is the natural entry point to the park which is one of the most famous wilderness beauty spots on Tasmania's east coast. In recent years, particularly with the development of excellent upmarket eco lodges, the area has become a "must see" destination famed for its bushwalking, fishing, boating and swimming. The brochure Let's Talk about Coles Bay and Freycinet National Park, which was published in the 1980s, observed of the area: "Where else would you find granite mountains rising straight from the sea to form a magnificent sheltered waterway? Where else would you find a beach so beautiful and secluded that on the last Royal visit to Australia, the Royal Yacht Britannia anchored to allow the Queen ashore for an Australian-style beach barbecue?" It was this event, back in the 1950s, which put Wineglass Bay, a staggeringly beautiful arc of pure white sand, in the public imagination and did much to promote the area to visitors. A day walk to Wineglass Bay is still one of the highlights. Much of the appeal of Coles Bay and Freycinet National Park is that they have remained timeless. Today people still come to the area to "get away from it all". They fish in the waters of Great Oyster Bay, which are still rich in trevally, flathead, crayfish and trumpeter.

Coles Bay is located on Great Oyster Bay near the entrance to Freycinet National Park 193 km north east of Hobart via the Tasman Highway and 174 km south east of Launceston.

The bay is named after Silas Cole who worked as a lime burner in the region. He collected shells from Aboriginal middens and burnt them for lime.

Freycinet National Park
Freycinet National Park is one of the gems of the East Coast of Tasmania. Geologically it comprises two huge eroded blocks of granite which form the Hazards and Mount Freycinet. They are joined by a narrow isthmus which has, as the park's most impressive feature, Wineglass Bay on the eastern side. The park was established in 1916 and has grown over the years so that it now covers 16,900 ha. The park's fauna includes Tasmanian pademelons, echidnas, varieties of snakes, white-breasted sea eagles, red-necked wallabies and, in season, it is common to see Humpback and Southern Right whales off the coast. In spring the park is alive with spectacular displays of rare native flora, particularly native orchids. On a perfect day - and the area claims to have 300 days of sunshine a year - the whiteness of Wineglass Bay, the beauty of the red granite and the drama of the cliffs at Cape Tourville all make Freycinet one of the most beautiful and memorable places in Australia.

Cape Tourville
One of the most popular and accessible viewing points in the park is Cape Tourville which is located 6.4 km on a sealed road from Freycinet Lodge. There is a short walk on a boardwalk down to Sleepy Bay and there is also a fenced track with dramatic views around the rugged coastline. There is a dramatic view across Thouin Bay to Lemon Rock and Cape Forestier. The road continues to Cape Tourville Lighthouse which was built in 1971 and is automatic. It has never been manned. Check out http://www.parks.tas.gov.au/indeX.aspX?base=1462 for more details.

The Friendly Beaches
The Friendly Beaches were only added to Freycinet National Park in 1992 but their sweeping stretches of white sand are particularly beautiful. They are signposted off Coles Bay Road. On their website the Tasmania Parks & Wildlife Service suggest that you can walk from "5 minutes to 5 hours". The area is popular with surfers and anglers and the rare New Holland mouse, a threatened species, inhabits the hinterland. Check out http://www.parks.tas.gov.au/indeX.aspX?base=1450 which includes a basic map.

Walks in Freycinet
At the entrance to Freycinet National Park there is a brochure which provides a map and advice on a series of walks. However if you want to plan ahead then the website http://www.parks.tas.gov.au/indeX.aspX?base=3371 has detailed information on the scenic drives at the edges of the park and the walks within the park.

In total it lists ten walks ranging from under two hours to 4-8 hour including the spectacular Wineglass Bay/Hazards Beach circuit.

(1) Sleepy Bay - an easy ten minute walk to the beach at Sleepy Bay. The Bay is on the route to Cape Tourville and the walk down to the rocks is easy and enjoyable. The kelp on the rocks is dense and impressive. At times the sea can be particularly rough.

(2) Little Gravelly Beach, Sleepy Bay - this is a tiny beach nestled between two craggy headlands. It is a 30 minute walk with the final stretch - from the top of the cliffs to the beach - being quite steep. There are excellent views over the coastline.

(3) Scenic Lookout, Friendly Beaches - a five minute walk from the car park off Isaacs Point Road, this lookout offers a fine view along the length of the Friendly Beaches.

(5) Wineglass Lookout - Don't be fooled. This may be a medium walk of 60-90 minutes return but it is all up hill and then, when you return, all downhill on a loose gravel surface. The reward is one of the most beautiful views in Tasmania. From the lookout there are superb panoramas of the white arc of sand that is Wineglass Bay.

(6) Wineglass Bay - if you continue over the hill from the Wineglass Lookout you will reach Wineglass Bay. It is a 2 1/2 - 3 hour return walk with a leisurely walk along the beach.

(7) Wineglass Bay/Hazards Beach circuit - This is my favourite walk. You head out around the coast, cross the isthmus, walk along Wineglass Bay, climb up to Wineglass Lookout and then head back to the car park. It takes around 4-5 hours but the first section (or the last section if you do it in reverse) is flat and easy.

(8) Hazards Beach - this is a serious walk lasting 5-6 hours which continues to the southern end of Hazards Beach and then returns and joins up with the Wineglass Bay/Hazards Beach circuit.

(9) Mount Amos - this three hour (return) walk is a track to the summit of one of the Hazards. The reward for the effort is spectacular views up and down the coastline.

If you are a keen walker there are even longer walks. An attractive option is to stay a week in Freycinet Lodge and spend each day on a different walk.

* Prior to the arrival of Europeans the area was occupied for at least 35,000 years by people from the Paredarerme Aboriginal language group. The number of shell middens in the area suggests that visitors from other areas may well have come to the shores where mussels and fish were in abundance.

* In 1642 Abel Tasman sailed past the peninsula and named it Vanderlin's Eylandt.

* The peninsula was renamed Freycinet after the brothers, Henri and Louis de Freycinet, who sailed along the coast with Nicolas Baudin in 1802.

* By the early years of the nineteenth century European sealers and whalers were operating on both Freycinet Peninsula and Schouten Island.

* Silas Cole, a lime burner who collected the shells from the Aboriginal middens and burnt them for lime, gave his name to the town and the bay.

* No settlement developed in the area until the 1930s. It was only ever a few isolated fishermen and hermits.

* In 1934 a retired auctioneer, Harry Parsons, purchased 5 ha of land at Coles Bay and the land grew into the small town which became a popular haunt for fishermen and bushwalkers. That same year Ron Richardson leased land in the Freycinet Park and established The Chateau.

* From the 1930s until the 1990s Coles Bay was a small community of shanties and huts on the edge of a beautiful bay. A track was cut around the coast but most of the building materials for the town arrived on the SS Koomeela which brought supplies across the bay.

* In 1954 during the royal visit, Queen Elizabeth and Prince Philip had a picnic at Wineglass Bay.

* The construction of Freycinet Lodge in the 1990s opened the area up to significant tourism, particularly eco tourism

There is a useful local website - http://www.colesbay.com.au - with some of the eating and accommodation options available in the area. 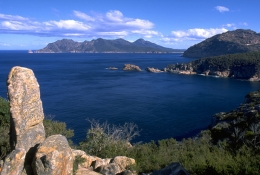 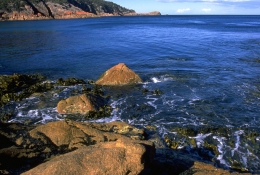 Kelp on the edge of the rocks at Sleepy Bay in Freycinet National Park. 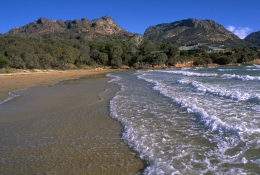 Richardsons Bay in front of Freycinet Lodge with the Hazards behind it. 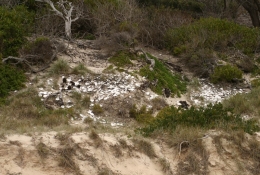 An Aboriginal shell midden beside the track to Wineglass Bay. 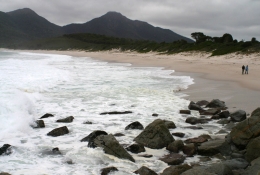 The beach at Wineglass Bay is almost deserted on a cold day. 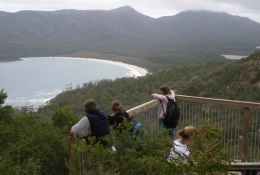 The viewing platform over Wineglass Bay on a rare, cloudy day. 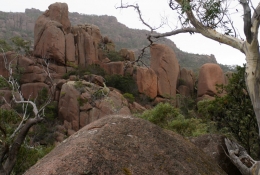 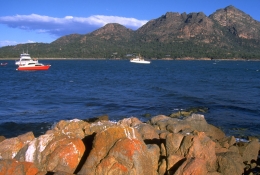 The view across Coles Bay to Freycinet Eco Lodge and the Hazards. 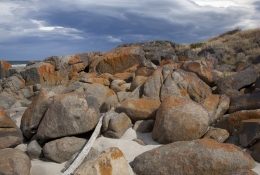 Red lichen stains the granite rocks on the shores of the Freycinet National Park.