Setting for one of the most famous bushranger holdups and murders.

Driving to Canberra from Sydney the traveller will see signs to Collector as they roar along the Federal Highway. Over the past couple of decades entrepreneurs have arrived in this tiny town, publicised their new attraction (usually a restaurant - I'm thinking of Lynwood Cafe - or an upgrade to the pub), and travellers have been diverted to check out something that is chic and out of the way. Otherwise it is just a small town with a very interesting history. It is the scene of one of the great dramas of the bushranging era. In many ways the gunning down of Constable Nelson would make a great "western" movie ... but that is not the Australian way. Visitors should pause, have a beer at the Bushranger Hotel, learn the story of Ben Hall and his gang of thugs, and check out the grave and the monuments to Constable Nelson.

Collector is located 231 km from Sydney via the Hume and Federal Highways. It is 35 km from Goulburn, 56 km from Canberra and 688 metres above sea level.

Although 'collector' is clearly an English word it is likely that the village's name comes from the local Gundungurra word "colegdar". It was recorded as "colegdar" by the explorer, Major Thomas Mitchell, and was reputedly the Aboriginal name for the region.

Bushranger Hotel
Today Collector only has one hotel but there was a time, in the late 1850s, when the town, because it was on the main route from Goulburn through to the Snowy Mountains, had five inns. At the time Kimberley's Inn, which had been built out of ironstone, was an impressive and important local hotel.

The events of 26 January, 1865 ensured the hotel's place in bushranger history and particularly in the life and times of Ben Hall. On that day Hall and his gang, having slid past a posse which was out looking for them, held up the publican. On their way into town the gang had fired at a horseman and that gun shot attracted the attention of the town's constable, the 38-year-old Samuel Nelson, a father of eight, who put on his uniform and went up the street to investigate. He was accompanied by two of his sons. One of the gang, a particularly unsavoury thug named John Dunn, had been left outside to guard the pub. When confronted by the constable he shot him dead with both a shotgun and a pistol. The constable died in the arms of his teenage son.

It’s a comment on Australia's attitude to its history that the first memorial to Sam Nelson wasn't erected in Collector until 40 years after his murder and that the original monument has been replaced by a rather handsome granite column which reads: 'This monument is erected by the Government of New South Wales to the memory of Constable Samuel Nelson who was shot dead on this spot whilst in the execution of his duty by the outlaw John Dunn on 26 January, 1865.' Some wit has named it "Nelson's Column". There is a monument to Nelson outside the pub. Not surprisingly the name of the pub was changed from Kimberley's Inn to the Bushranger' Hotel to recall/celebrate this event and over the years pieces of bushranging memorabilia (mostly historic photographs) were collected. The pub has inevitably been modified. There was no veranda outside when Constable Nelson was murdered. For up to date information about the hotel check out http://www.bushrangerhotel.com.au.

Grave of Samuel Nelson
The grave of Constable Samuel Nelson is located at the back of the Church of England cemetery in Bourke Street . It is more a memorial being placed there on 26 January, 1965 by the Wild Colonial Days Society and the Goulburn & District Historical Society. Another plaque was added in September, 2006 by the NSW Police Force. Both plaques read: "On 26th Jan. 1865, the bushrangers Ben Hall, John Gilbert & John Dunn bailed up Kimberley's Inn at Collector. Constable Samuel Nelson, the lock-up keeper, courageously challenged the bushrangers and was shot dead by Dunn."

The Dreamers Gate Sculpture
Over the road from the Bushranger Hotel (in Church Street) is the controversial sculpture Dreamers Gate by Tony Phantastes. It was constructed between 1993 and 1997 out of cement and chicken wire. The Department of Environment describes the sculpture as: "an essential part of the Collector pastoral landscape. The work provides a narrative document of the history of Australian land-use practices told through the story of the life and death of one man.The work acts as both a frame of and as part of the landscape intrinsically tied to its location. It is a unique world view rising up out of the land and inseparable from that place. Dreamers Gate is unique in the process used in its design and the method and materials adapted from outside the art realm. It is not art for arts sake but art of passion and emotion and available for all." It is 7 metres high and 26 metres long. For more detailed  information check out http://www.environment.gov.au/cgi-bin/ahdb/search.pl?mode=place_detail;place_id=102138.

Historic Collector
There is no local brochure but there is a large, and useful, placard - Welcome to Collector - in Church Street which identifies 15 places of historic interest around the town including the General Cemetery where the memorial to Constable Nelson is located; St Bartholomew's Catholic Church (c. 1861); All Saints Anglican Church (1859); Mill Hill where, in 1820, Governor Macquarie first viewed Lake George; the Bushranger Hotel (1860) and the General Store, once a hotel which dates from 1841. All the buildings can be inspected on a 40 minute walk around the town.

* Prior to European occupation the area around Collector was the home of the Gundungurra/Ngunawal Aboriginal people.

* Governor Lachlan Macquarie and his party travelled through the area in 1820. He viewed and named Lake George after King George III.

* The area was first settled by Europeans when Terence Aubrey Murray was granted land in 1829.

* By 1837 Murray had built himself a substantial home and that same year a postal service began from Goulburn across the flat plains to Lake George and down to Yass.

* In 1841 Murray employed Surveyor Cardew to lay out a town which became known as Murray Town. That same year Pierre Poidevin opened the town's first hotel.

* In 1859 a new town, New Collector, was surveyed by the government. That same year All Saints Church of England was consecrated.

* In 1861 the Commercial Hotel, now known as the Bushranger Hotel, opened for business.

* The town's most famous incident - the shooting of Constable Nelson by John Dunn - occurred on 26 January 1865.

* Collector Public School was established in 1866 with an enrolment of 40 students.

* In 1907 a memorial to Constable Nelson was erected near the Bushranger Hotel.

* When Canberra developed as the national capital (after 1913) Collector benefited because the Barton Highway, later the Federal Highway, ran through the town and was the main artery between Canberra and Sydney.

* In 1915 the local school burnt down. It was replaced with the current buildings.

* Today the Federal Highway by-passes the town and it has become a quiet and sleepy village with some locals commuting to Canberra. 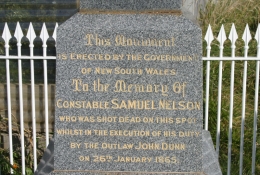 The monument to Constable Samuel Nelson erected where he was shot on the centenary of the crime in 1965. 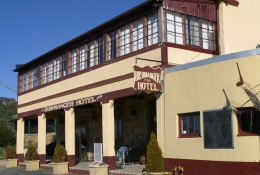 The Bushranger Hotel, previously known as the Kimberley Hotel. 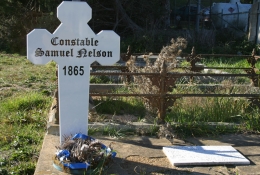 The grave/monument to Constable Samuel Nelson in the Church of England cemetery. 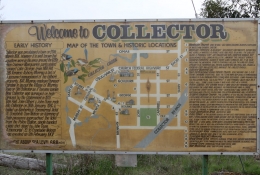 The Guide to the town and its historic locations.