Historically Collie has been Western Australia's most important coal mining town. It has grown to become a major centre with a population of 9,500 and wide range of services to meet the needs of a growing population. It has, for example, five primary schools. The appeal of the town lies in its historic role as a coal mining centre. It has a replica coal mine which allows visitors to experience what life was life underground (all the coal in the area is now mined by open cut) and there is a particularly interesting Steam Locomotive Museum beside the modern visitor centre.

Collie is located 202 km south of Perth via Highway 1 and Australind.

In 1829 Captain Stirling led a party to explore the area south of Perth. Included in the party was a Dr Alexander Collie, a physician on the HMS Sulphur which had brought Captain Stirling to the Swan River colony. The town is named in his honour. The establishment of the town's railway station led to a naming problem. The station was called Collieville or Coalville, then Colliefields and finally Collie.

V Class Steam Locomotive
The V class locomotive was utilised by WA Government Railways from 1955 until 1973 initially to haul coal between Collie and Perth. Only twenty four units were built under sub contract by Robert Stephenson & Hawthorn Ltd at their Darlington works. The locomotive was of a modern design with high superheat and large combustion chamber and had a rated load capacity of 1320 tonnes. This represented a significant upgrade in capacity on the S and F class locomotives." and

54RB Mechanical Shovel
The 54 Rushton Bucyrus (RB) excavator was purchased by Griffin Coal in September 1961 and worked in excess of thirty eight thousand hours in the Collie Coalfields during which time it moved approximately 9 million tonnes of coal. It was donated to the Collie Community by the Griffin Coal Mining Company in 1977. The original 4.5 tonne bucket is still attached."

Replica Coal Mine
The Replica Coal Mine is located next to the Collie Visitor Centre at 156 Throssell Street. It is a replica of an underground coal mine which was created in 1983 by the local Rotary Club. The volunteer guides provide an insight into the mining industry and the working conditions of the early underground miners. Tours usually last about 30 minutes. There is also a self-guided option with videos and interpretative panels. Tours can be booked through the Collie Visitor Centre, tel: (08) 9734 2051.

Coalfields Museum
Over the road at 161 Throssell Street  is the Coalfields Museum which is housed in the old Road Board office buildings. It is open from Thursdays to Mondays from 10.00 am - 3.00 pm and exhibits include vintage bottles, radiograms, phonographs, gramophones, wirelesses, a baker's cart, mining equipment, a Coolgardie safe, Icyball refrigerator, an impressive rock and mineral display, historical photos and military memorabilia. Some true rarities include a restored Italian barrel organ which was once used to entertain patrons at Fontana's Wine Saloon next to the Federal Hotel in Throssell Street. There is also public letterbox which was cast in the J & E Ledger Foundry in Perth in 1903. For more information tel: (08) 9734 1299.

All Saints Anglican Church
Located on the corner of Venn and Mungalup Road, All Saints Anglican Church was opened in 1915 after it had been built with money provided by a Lady Noyes in England. Built in a traditional Norman style the church has superb brass candlesticks and an altar crucifix which reputedly date from the seventeenth century. The church uses local jarrah timber and has impressive stained glass windows. In the Sanctuary is a large mural by Philip Goatcher which took 8 months in 1922 to paint. It was painted on a large frame in Perth and attached to the sanctuary wall later. It is interesting to note the local subject matter at the extremities of the mural. On the far right are two miners framed in a pit tunnel while on the far left are two Aborigines sheltering under a tree. There are thirty individuals in the mural including religious figures, the Madonna, historians and pastoralists.

Court House
Located on the corner of Wittenoom and Pendleton Streets and built in 1913 in Federation Free Style architecture, the Collie Court House is a single storey red brick building with a Marseilles tiled roof. The street facade features an embossed coat of arms flanked by two decorated arches leading to the entry porch.

Collie Post Office
Located on the corner of Throssell and Pendleton Street, the Collie Post Office is impressive with its facade of five arches. It was designed and built by Hillson Beasley, the Government architect, in 1905. Additions were added in 1908 and 1925.  It operated as a Post Office until the early 1990's.

Minninup Pool
Located 3 km south of Collie on the Mungalup Road this is a beautiful picnic spot beside the Collie River which is popular with locals. It is ideal for swimming, canoeing and fishing.

Wellington National Park
Wellington National Park is located 18 km west of Collie and comprises 17,0009 ha of jarrah, marri and blackbutt forest. The centrepiece of the park is the Collie River Valley and the Wellington Dam with the dam's picnic area being 29 km from Collie. The park is ablaze with wildflowers (there are over 300 varieties in the park) in the spring and the Collie River, which forms deep pools and tumbles over granite boulders, is ideal for swimming or canoeing. Two places of particular appeal aare Honeymoon Pool and Potters Gorge both of which are ideal for picnics. The park is home to rare and unusual native animals including the chuditch, quenda, quokka, brushtail possum and woylie or western ringtail possum - most of whom are nocturnal.
One of the most interesting areas in the park is around Honeymoon Pool which is situated on the lower Collie River. It is a popular camping and picnic area where visitors can go swimming, bushwalking, picnicking, canoeing, fishing and camping. Facilities include wood and gas barbecues, picnic tables, toilets and a viewing platform. There is a 9.5 km (or 5 km return to the lookout) loop walk (or mountain bike ride) known as the Kurliiny Tjenangitj Trail. Check out the map and details at https://trailswa.com.au/trails/kurliny-tjenagitj-trail.

For more details on the park check out http://www.collierivervalley.com.au/collie-visitor-centre/wellington-national-park and https://parks.dpaw.wa.gov.au/park/wellington. There is a very detailed and comprehensive brochure which can be downloaded at https://parks.dpaw.wa.gov.au/sites/default/files/downloads/parks/20140733-WellingtonDistrict_0.pdf.

Wellington Dam
The Wellington Dam was created in 1933 and enlarged in 1955 and stores water to power a hydro power station which generates 2MW of electricity. Today it is mostly used by visitors who enjoy the picnic and swimming facilities; fish in the lake; and, in the brief time when they are available, attempt to catch marron in the dam and Collie Creek waters. See http://www.collierivervalley.com.au/collie-visitor-centre/fishing-marroning for more details.
The main attractions include:

Honeymoon Pool
From Honeymoon Pool to Wellington Dam there is the Jabitj Trail, a 12 km return trail (1-3 hours) that follows the Collie River and provides delightful views of the rapids and pools along the way.

Potters Gorge
Located on the shores of Wellington Dam, Potters Gorge is a popular camping and picnic area where visitors enjoy fishing, canoeing, boating and bushwalking. Wellington Dam is open for trout fishing all year round.

The Quarry/Kiosk
The Quarry is a popular picnic, rock climbing and abseiling (you have to book through Department of Parks and Wildlife - tel: (08) 9735 1988) site. The Quarry provides information about the dam’s construction and a history of the area. Nearby the café, the Kiosk at the Dam, serves light refreshments. The Kiosk is open Thursday to Sunday from 9.00 am - 4.00 pm and hires mountain bikes. Check out http://www.kioskatthedam.com.au or tel: (08) 9734 7521.

* Prior to the arrival of Europeans the area around Collie was home to Nyoongar Aboriginal people.

* The area around Collie was first explored in 1829 when Captain Stirling led a party into the area as part of a general reconnaissance of the area to the south of Perth. He was accompanied by Lieutenant Preston and Dr Alexander Collie.

* In 1830 the Surveyor General John Septimus Roe travelled through the district as part of his general exploration of the south west.

* There seems to have been little interest in the area until coal was discovered in 1883.

* In 1883 coal was discovered along the Collie River.

* It is now accepted that coal was found by George Marsh, a shepherd in the employ of Arthur Perrin. Perrin announced the discovery in 1889 when he took out a coal mining lease of 300 acres.

* The following year the Collie Commercial Coal Mining Company was formed. It was clear that the area's supplies of coal were sufficient to justify the development of a town.

* In 1895 a railway line to the coalfields was commenced and the following year Collie was declared a township.

* In 1897 the town of Collie was surveyed and gazetted.

* By the beginning of this century coal from Collie was being used extensively throughout Western Australia.

* in 1931 the first coal fired power station was built at Collie.

* In December, 1943 it was announced that, as part of the war effort, Collie would be the location of a power alcohol distillery which would produce 3-4 million gallons (13.6-18.2 million) of alcohol from 1.25 million bushels of wheat. The alcohol would be used to improve the octane rating of petrol and was essential to munitions manufacture.

* In 1948 there was a three week strike at one of the mines because miners claimed it was unsafe to work underground with a cantankerous horse named Red.

* Underground mining around Collie stopped in 1994. It was replaced entirely by open cut operations.

* In 1997 the Baarnimarr Reconciliation Park was established. 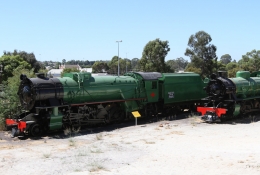 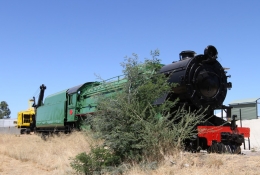 The V Class Steam Locomotive behind the Visitor Centre. 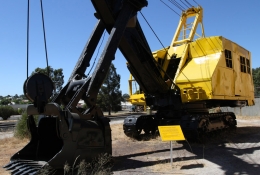 The 54RB Mechanical Shovel behind the Visitor Centre. 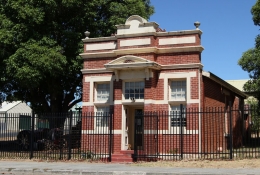 The Coalfields Museum - the original Roads Board Building. 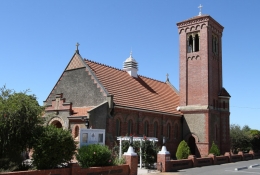 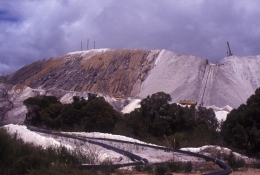