Historic mining town once so radical it was nicknamed "Little Moscow" now known as the Pit Pony Capital of Australia.

Collinsville is a mining town. No matter where you look in this small town you are reminded of its mining heritage. There is a memorial statue at the entrance to the United Mineworkers Club (now known as the Collinsville & Scottsville Workers Club) in Railway Road which bears testimony to the miners that have been killed in the district's mines over the years. There is the impressive Coalface Experience Museum at the Workers Club. There are eight murals around town representing aspects of regional coal mining. The entrance to the town boasts an impressive brass statue of a Pit Pony and even the local pub has been renamed the Pit Pony Tavern. In 2013 the mining company, Glencore, closed the local mine down. It had been making a loss for years. Then, with an increase in price, the mine was reopened in 2016. Between the two events houses in the town were selling for as low as $65,000. Today, with the price of coal rising, the mine has reopened and Glencore are, once again, employing over 300 people in the mines. The other company operating in the area - Q Coal - have mines on the southern end of town: Sonoma mine, Drake mine, Jax mine and, in 2017, a new mine under construction called Byerwen mine.

Collinsville is located 87 km south-west of Bowen, 1,144 km north west of Brisbane and 187 m above sea-level.

During the building of the railway in 1917 the district was known as Moongunya which was thought to be a local Aboriginal name for "coal". In 1921, as a town began to develop, it was renamed Collinsville after the local MLA Charles Collins who represented the Bowen electorate from 1915-1936.

Walking Around The Town
There is a pleasant, and easy, walk from the Pit Pony bronze sculpture, down the main street (Scottsville Road) and around into Railway Road to the Coalface Experience at the Collinsville & Scottsville Workers Club. Along the way there are a number of interesting murals (mostly depicting the role of the Pit Pony in the history of the town), past the pubs in town (notably the Pit Pony Tavern) and past the town's modest memorial to the miners who have died while working underground. There are information signs along the way which recall places such as the Pioneer Picture Palace (built 1923 and operated until 1984) which became a grocery and vegetable store and the Pit Pony Experience Donators Wall (near the bronze Pit Pony).

The Pit Pony Statue
In 2015 meetings were held to raise money to build a bronze statue of the town's last pit pony. Pit ponies hauled empty skips into the bords for the miners to fill, then hauled full skips out to the rail end where a winch rope was hooked onto a string of full skips and then winched to the surface. They also dragged metal sleds full of supplies for the miners all around the pit, pulled electrical boxes into position and delivered rolls of cable and drums of oil. They were eventually retired in 1990. The statue is located on the median strip in Sonoma Street at the entrance to the town.

The Coalface Experience
Located upstairs at the Collinsville & Scottsville Workers Club in Railway Road (you pay your entry at the bar), The Coalface Experience uses a combination of interactive displays, audio-visual exhibits, two theatrettes and historical records, to present visitors with a history of the coal mining industry in Collinsville and an interpretation of the past, present and future of Queensland’s coal mining industry.
By focusing on the lives of individual miners (their recollections are caught on video) it offers a deeply personal insight into the struggles, strikes and the mateship which lie at the heart of this very dangerous and difficult industry. The museum also shows visitors what life was like for the coal miners, both above and below ground in the 1950s.
The museum’s opening coincided with the 50th anniversary of the town’s biggest underground mining disaster, in which seven men were killed in an underground gas explosion on October 13,1954. It honours those men, and 19 others who have also lost their lives on the Collinsville coalfield. For more information tel: (07) 4785 5452.

Historical Display Centre
The Historical Display Centre located at the old hospital building in Garrick Street. The centre's exhibits include memorabilia from the early days of the district (including Mt Coolon); a mining room displaying items used in the early days of underground mining at Scottville and Collinsville; and a huge collection of photographs, donated items, and information.  The centre is manned by volunteers on Wednesday mornings and will open at any time upon request. The Historical Society  has a collection of small booklets.  Information and contacts are available at the Visitor information Centre at the Collinsville Show Grounds.

Reservoir Hill
Turn off the main road from Bowen at Walker Street and then turn into Shrubsole Street and you will reach Miller Street which ascends to the Town Reservoir Hill which offers good views over the town. It is possible to see Mount Devlin to the north, the Leichhardt Ranges to the east, and the Sonoma and Collinsville mines to the south and west.

Collinsville - Scottsville Walkway
If you feel like some exercise there is a 3.7 km tarred walkway which runs beside the road from Collinsville to Scottsville.

Collinsville Coal Mine
Today Collinsville is an open-cut mine at the northern end of the vast coal deposit known as the Bowen Basin. The mine produces coking and steaming coal with the coal being shipped out from Abbot Point north of Bowen. The mine is not open for inspection. It has been estimated that the mine still has coal reserves of approximately 196 million tonnes of coking coal.
Mining began in 1919. Mount Isa Mines (MIM) gained a controlling interest in 1972. In 2003, MIM was purchased by Xstrata. Management of the mine was continued by Thiess until early 2013. In July 2013, the new owner, Glencore, dismissed 249 workers in an effort to return the mine to profitability. By 2016 they were preparing to rehire 200 workers and reopen the mine with new equipment. They eventually employed over 300 miners. The mine is now vulnerable to price fluctuations and the increasing move towards renewable energy.

Bowen Consolidated Coal Mine
The Bowen Consolidated Coal Mine (No.1 Mine) site located at Scottville is recognized as one of the most intact sites of its type. The huge headframe dominates the site and Scottville is often described as the "Home of the Big Poppet".  For more information check out the Visitor Information Centre.   A volunteer well versed in the history and early operations of the mine  accompanies visitors through the site.  A brochures with information on many of the relics is given to visitors.

Bowen River Hotel
Located on the Bowen River 8 km from Strathmore Station Homestead and 23 km west of Collinsville, the Bowen River Hotel is a hotel which was restored in 1999. The pub was originally established around 1860 as a resting on the banks of the Bowen River, was donated to the National Trust of Queensland in 1974 by Ted Cunningham, of Strathmore Station. It lay abandoned until 1999, when it was rebuilt, using traditional timber preparation and carpentry methods. The pub is comprised of two buildings, connected by a covered walkway and is a fine example of bush carpentry and jointing with wooden pegs. The hotel has a wonderful collection of photographs, paper clippings and memorabilia from bygone years. For more information tel: (07) 4785 3388.

Fossicking
The area around Collinsville is known to contain quantities of opalised wood, petrified wood, hornblende, prehnite crystal, jasper, calcite, amethyst and agate and is therefore popular with gem fossickers. A fossicking licence is required and fossickers must also obtain permission before entering private property. For the best places to seek the local gems, contact the Bowen Lapidary Club, tel: (07) 4785 6312.

* Prior to the arrival of Europeans the area around Collinsville was home to members of the Biri Aboriginal language group.

* The first European in the area was Ludwig Leichhardt who reached the Suttor and Burdekin Rivers to the west of the present town in April 1845.

* Leichhardt was followed by a number of explorers of whom the most important was George Elphinstone Dalrymple, who explored the area in 1859-1860. His forays happened to coincide with the establishment of the separate colony of Queensland (December 1859) which led to the official opening up of the district in early 1861.

* Between 1861 and 1863 the entire area was taken up by pastoralists. Strathmore Station was the first to be established in the district.

* The European settlement of the area led to the discovery of significant deposits of gold, silver, lead, bismuth, gemstones and, in 1866, coal.

* In 1912 the Bowen River Coal Prospecting Syndicate was formed to mine coal in the area.

* In 1917 construction of a railway from the coast to the coalfields began.

* By 1919 coal was being extracted from an area which, at the time, was known as 'Moongunya' - thought to be the local Aboriginal word for coal. The underground mine was operational from 1919 until the 1960s.

* By 1921 a town was created by the Queensland government around the coal mine. The state primary school was established in the same year.

* By 1922 nearly 100 lots had been sold. The area was renamed Collinsville after the local politician Charles Collins who represented the Bowen electorate from 1915-1936.

* The railway finally reached the town on 31 August, 1922. Over 200 men were employed in the local coal mines, the town's population had reached nearly 700 and there was a hotel, a picture theatre, a dance hall, a bowling green and several shops and tradespeople.

* In 1924 the Post Office officially changed the name of Scottsdale to Scottsville to avoid confusion with Scottsdale in Tasmania.

* By 1936 Collinsville had four strong and powerful Communist trade union branches. A Catholic primary school was established in the same year.

* In 1954 seven men and two horses were killed in the Collinsville State Coal Mine due to the collapse of 450 tonnes of earth.

* In 1960 the Queensland government closed down the State-run mine in the area, claiming that it had experienced 'a long period of friction with militant trade unions'.

* The mine was subsequently sold to private enterprise which managed to win a large contract with Japan, thus keeping the town economically viable.

* In 1983 a railway line was opened to the open cut mine at Scottsville.

* In 2013 the mine was purchased by Glencore and closed down until it could make it economically viable. It had been running at a loss for 18 months.

* 2016 Glencore announce that they will open the coal mine again and employ 200 miners.

* Today the area around Collinsville produces over one million tonnes of coal per annum which is shipped to the new deepwater coal-loading facilities at Abbot Point near Bowen.

* Glencore estimate they will produce 8 million tonnes from their Collinsville mine in 2018.

There is a fascinating website Collinsville Memoirs Online which records the history of the town through over 20,000 images.  Check it out at http://www.memoirs-online.com.au. The official local website can be accessed at http://www.tourismbowen.com.au/collinsville. 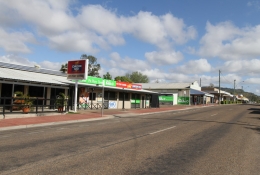 The Pit Pony Tavern in the main street. 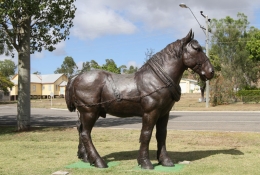 The Pit Pony bronze statue at the entrance to the town. 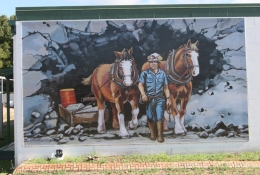 A mural in the town depicts the role of the Pitt Pony in the history of mining. 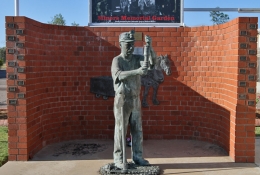 The Miners Memorial outside the Collinsville & Scottsville Workers Club. 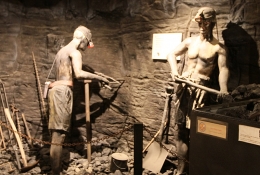 Model depicting working miners in the 1950s - inside the Coalface Museum. 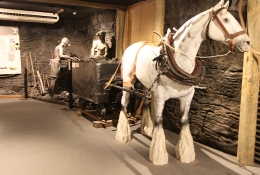 Model of a pit pony and miners working - inside the Coalface Museum. 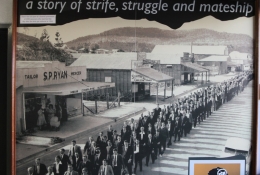 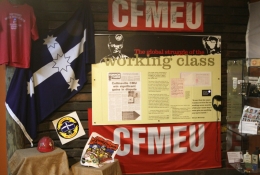 A special wall dedicated to the CFMEU - the miner's union.