A small town which, as the song indicates, is on 'The Banks of the Condamine'.

'O hark the dogs are barking, love, I can no longer stay;
The men are all gone mustering, and it is nearly day,
And I must be off by morning light before the sun does shine,
To meet the Roma shearers on the banks of the Condamine.'

to which the sad reply is:

'O Willy, dearest Willy, O let me go with you!
I'll cut off all my auburn fringe, and be a shearer too;
I'll cook and count your tally, love, while ringer-o you shine,
And I'll wash your greasy moleskins on the banks of the Condamine.'

These are the well known verses from the bush ballad, 'The Banks of the Condamine', which tells the story of a man eager to go shearing and his beloved Nancy who wants to go with him. Condamine is a quiet rural town where visitors stop to see the two metre-high Condamine Bell and walk along the banks of the meandering Condamine River.

Condamine is located 334 km west of Brisbane via Dalby and 33 km south from Miles on the Leichhardt Highway.

The first European to pass through the district was the explorer Allan Cunningham who crossed the river in 1827 and named it after the aide-de-camp to Governor Darling whose surname was De la Condamine.

The Condamine Bell
The town's only 'tourist attraction' is a large replica of the Bullfrog or Condamine bell which stands in the Condamine Bell Park in the main street. There are plaques about the bell's history which record that  In 1867-68 a local blacksmith named Samuel William Jones invented the Condamine 'Bullfrog' cowbell. It was made from either a cross cut saw or pit saw and tied around the necks of cattle and bullocks. The bells ensured the stockmen could locate cattle and even able to determine the distance of a bullock by the sound of its bell. It is claimed it could be heard from seven miles (11.2km)  away. The bell was so successful, according to Dame Mary Gilmore, that it actually made the cattle deaf.

* In 1827 the explorer Allan Cunningham was the first European to pass through the Condamine area.

* 1851-57 - there was a small community living on the banks of the river and the Reverend Benjamin Glennie, known as the Apostle of the Downs, rode from Drayton to conduct religious services.

* In 1856 the Condamine Post Office was opened for business.

* By 1859 Condamine was surveyed and a small outback community comprising the post office, a blacksmith's shop, a store and two pubs came into existence.

* In 1863 a school was opened and the Condamine River flooded. During the flood the clerk of Petty Sessions drowned trying to cross the river. The river flooded again in 1864.

* In 1864 the first bridge across the Condamine was built.

* In 1867 Cobb & Co started a regular weekly service from Dalby to Roma via Condamine. Town became an increasingly important stopover for bullock teams.

* 1873 - reputedly the highest flood ever recorded with supplies being sent by rowboat from Warwick.

* the district declined around 1879 when the railway passed through Miles and did not go to Condamine.

* 1904 - farming families starting moving into the area, clearing the land and growing wheat.

* 1950 - the flood in the Condamine was so serious the town was isolated for two weeks.

* By the 1970s wheat and sorghum was being grown and beef cattle had taken over from sheep.

* 1983 - flood exceeds 14 metres and reaches the Condamine Hotel. Supplies have to be ferried into the town.

* In 2004 the Condamine Bell was named a Queensland Heritage Icon.

* Today the town is surrounded by the huge boom of coal seam gas in the Surat Basin. 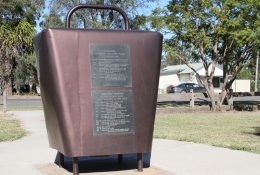 The big Condamine Bell at Condamine. 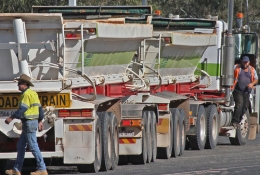 A road train at Condamine.