Coober Pedy is an opal mining town and, like White Cliffs, Lightning Ridge and Andamooka, it has a rawness and roughness produced by the simple idea that there is only one reason to live in this inhospitable desert outpost: digging for opals. Yet it is a legitimate tourist mecca which will keep visitors engrossed with its array of unusual activities. There's the grassless golf course, the underground church, the noodling for gems on mullock heaps, the tourist shops, the expensive and sophisticated accommodation, the mixture of nationalities, the frenetic searching for wealth. And all this is set against a backdrop of one of the harshest environments in Australia.
South Australian novelist, Colin Thiele, in The Fire in the Stone wrote of the town: "The opal fields lay six hundred miles northwest of Adelaide, midway between Port Augusta and Alice Springs. A flat, bare landscape it was for the most part, with undulations here and there and flat-topped hills and breakaways and wind-swept plains. An old land, eroded and wrinkled, worn down over endless ages, peneplain on peneplain, until even the hills were remnants of ancient plains. And in the sides of the slopes, cut into every knoll and knob, were doorways and entrances and burrows as if the whole place was inhabited by five foot high rabbits walking about on their hind legs."
About 50% of the population live underground. The reason being that the temperature can rise to 50°C in summer and it is typically around 40°C in January. Underground the temperature remains a pleasant 25°C. The current population is around 2,500 of which 60% were born overseas. Over 47 nationalities are represented with the majority of the population being either Greek, from the former Yugoslavia (ie Serbian, Macedonian) and Italian. There are no large companies operating in the area and this has been achieved by the fact that a mining lease can only be acquired for an area of 50m x 50m or 50m x 100m.

Coober Pedy is located 845 km north-east of Adelaide via Port Augusta and 213 m above sea level. It has an average annual rainfall of 175 mm.

The town was originally called Stuart Range but this was officially changed to Coober Pedy by the local Progress and Mining Association in 1922. It is accepted that the name is two local Aboriginal words with 'coober' meaning either boy, uninitiated man or white man and 'pedy' means hole or rock hole. Thus Coober Pedy is a description of what the local Aborigines saw as the decidedly strange activity of 'white men down holes'.

Coober Pedy Tours
Coober Pedy may be an opal town but it is also a tourist town. There are a large number of tours including tours of opal mines, underground homes and shops, cutting displays and organised 'noodling'. Beyond the town there are also tours to the Breakaways and to the Painted Desert. Check out the town's Visitor Guide which can be downloaded at https://www.flipsnack.com/CPRBTA/2018-coober-pedy-visitor-guide/print-pdf.html or http://www.cooberpedy.com/tours which features most of the tours of the town.

Searching for Opals
It is possible to join a guided tour and to go "noodling" for opals. There is a public "noodling" area which is located between Old Water Tank Road and Jeweller Shop Road. Permits are required if you use a pick, shovel or digging device. They can be obtained at the Mines and Energy Office.

Umoona Opal Mine and Museum
Located at 14 Hutchison Street, the Umoona Opal Mine and Museum is a commercial operation which offers guided tours through an Aboriginal Interpretative Centre; shows a documentary The Story of Opal; displays fossils and opal jewellery as well as sells both rough and cut opals. It proudly claims to be the town's largest single underground tourist attraction. Tel: (08) 8672 5288 or check out https://www.umoonaopalmine.com.au.

Coober Pedy Underground Catacomb Anglican Church
At the eastern end of Coober Pedy, under a hill and at 746 Catacomb Road, is the town's Underground Catacomb Anglican Church, named after the famous catacombs in Rome. The altar is made like a winch and both the crucifix and the lectern are made out of mulga wood. Behind the altar are two air vents. A church service is held at 9.30 am every Sunday. For more information tel: (08) 8672 5038 or check out https://catacombchurch.com.au.

Serbian Orthodox Church
Built, or rather dug, in 1993, the Church of St Elijah the Prophet is an impressive underground church. All the buildings - the church, the parish house, a religious school and a community hall - were dug by the Serbian opal miners living in Coober Pedy. The church is 30 m long, 5.3 m wide, and 7 m high, and is carved out of the surrounding sandstone. A ceiling window is covered with stained glass and the church has a gallery with a baptismal font and an altar. The iconostasis at the front of the church is made of glass and the interior walls are covered with bas reliefs of saints.

St Peter and Paul Catholic Church
The town's, and the world's, first underground church, St Peter and Paul Catholic Church in Hutchison Street, was dug out in the 1970s and extended in 1984. It is suitably small and intimate. Mass is held at 6.30 pm on Saturday and 10.00 am on Sunday. For more information tel: (08) 8672 5011 or check out http://www.pp.catholic.org.au/about-our-parishes/coober-pedy-est-1965-.

The Big Winch
The Big Winch, which is located on Italian Club Road, was built by Klaus Wirries in the 1970s as a huge replica of the simple machinery used to bring opals to the surface. Wirries' original Big Winch was destroyed by fire in 1986 but it was quickly rebuilt. Built on a hill it offers an excellent overview of the town. It also offers a scenic view cafe and an opal shop and is open from 9.30 am - 4.30 pm. Check out https://www.cooberpedy.sa.gov.au/page.aspx?u=364&t=uList&ulistId=0&c=404#.W-OSh3ozZBw for details.

Coober Pedy Opal Fields Golf Course
It is impossible not to love desert golf courses. The amount of water required to keep them green is impossible and consequently, as is the case with the famous Coober Pedy Opal Fields Golf Club, there is not a blade of grass on the fairways and the greens are oiled sand. Golfers use a piece of artificial grass to tee off and then it is driving and chipping on the desert sands. Located at 1509 Rowe Drive, and with lots of witty signs about "Keep off the grass" it is an experience. Check out http://www.cooberpedygolfclub.com.au.

Kangaroo Orphanage
Located at 131-133 Hutchison Street, Josephine's Gallery and Kangaroo Orphanage is an unusual combination of an Aboriginal art gallery, an opal museum and an orphanage for kangaroos and particularly for joeys. Feeding times for the animals are at noon at 5.30 pm. For more information tel: (08) 8672 5931.

Crocodile Harry's Underground Nest
There is no question that very eccentric people are attracted to towns like Coober Pedy. One of the strangest was a man calling himself Crocodile Harry who lived in a hole in the ground 4 km from town on Seventeen Mile Road. This strange man, who rather fancied himself (he is dead now) as a hugely successful seducer (his walls are festooned with the addresses of girls who he claims to have seduced) was, according to his own accounts, a person by the name of Arvid Von Blumentals, a Latvian Baron who was forced to leave his country after World War II. He claimed to have worked as a crocodile hunter in Northern Australia before coming to Coober Pedy to fossick for opals in about 1975. Although his story seems implausible - a good piece of bush mythology - it is interesting to note that Roger Jose, the Hermit of Borroloola, who lived in a damaged 1000 gallon tank at Borroloola on the Gulf of Carpentaria in the Northern Territory until his death in 1963, reportedly sold his unusual accommodation to a crocodile hunter named Harry Blumental. So maybe the story was true. Crocodile Harry's underground house was featured in Mad Max: Beyond Thunderdome and before they left the film crew created a singing sculpture out of metallic trash which they called 'The Orchestra'. It rattles in the breeze. It is still a popular place for local tours - even though Harry is no longer there to entertain the tourists. A genuine idiosyncracy.

Kanku Breakaways Conservation Park
Located 32 km north of Coober Pedy, this remarkable Conservation Park, which is now owned by local Aborigines, is a series of low lying, and dramatically colourful, hills which have "broken away" (hence "breakaway") from the Stuart Range. Drive 23 km north towards Alice Springs on the Stuart Highway then turn right to the two lookout points which provide views across to outcrops named ‘Salt & Pepper’ and Panorama Hill which has been used in a number of films. Like Uluru, the sun changes the desert colours on the breakaways.
It is possible to continue on a loop back to Coober Pedy and further east the road runs for 14 km along the dog fence - a remarkable 2m high fence which stretches for over 5,300 km across three States, to protect sheep in the south from dingoes. The strange, desert-like moonscape along the fence, which is produced by fossilised shells and cracked grey clay, has been nicknamed the ‘Moon Plain’. Permits are required and can be purchased at the Coober Pedy Visitors Information Centre.

Painted Desert
Located 150 km north of Coober Pedy and just east of Arckaringa Homestead, is the Painted Desert which has been described as "some of Australia’s most spectacular breakaway country". The area has been eroded away over 80 million years by a combination of leaching of minerals and erosion and the result is a dramatic desert landscape where the colours change during the day and create a magical, otherworldly environment. Wildlife is common in the area with visitors likely to see red and grey kangaroos, euros, goannas, bearded dragons, dingoes and wedge tailed eagles, hakes, butcher birds, galahs, sulphur crested cockatoos, ringneck parrots, budgerigars, wild turkeys (bustard), finches, ducks, emus and waterbirds. For more information check out http://www.thepainteddesert.com.au. You should check road conditions before departing from Coober Pedy.

* About 150 million years ago the area was covered by the ocean. The opals were created by silica solutions being deposited in cavities, faults and fractures.

* Prior to the arrival of Europeans the area was home to the Kokatha Aboriginal people.

* The first European into the area was the explorer, John McDouall Stuart, in 1858.

* The opals at Coober Pedy were discovered by a teenager, Willie Hutchinson, in 1915. The town was established that year.

* It is claimed that the first people to live underground where miners who had been soldiers in Europe during World War 1. Used to living in trenches they knew the climatic advantages gained from living in the constant temperature of a dugout.

* In 1917, with the completion of the Trans Continental Railway, a number of railway workers moved to the town.

* The town was officially named by the local Progress and Mining Association in 1922. That year the South Australian government built an underground water tank capable of holding 2 million litres.

* In 1946 an Aboriginal woman, Tottie Bryant, discovered opals at the Eight Mile field. This prompted a new rush of miners to the area.

*  Coober Pedy finally got a regular water supply in 1985. The water comes from an artesian basin and is purified by a desalination plant.

* In 1987 the Stuart Highway from Adelaide to Coober Pedy was sealed.

* The first edition of the Coober Pedy Regional Times appeared in 2001.

There is a detailed local website. Check out http://www.cooberpedy.com. 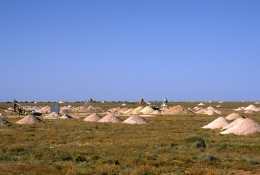 It is estimated there are 250,000 molehills around Coober Pedy 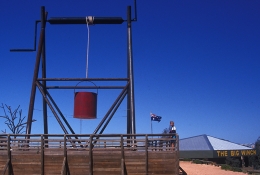 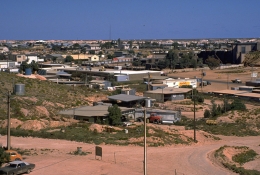 View over Coober Pedy from The Big Winch in 1990. 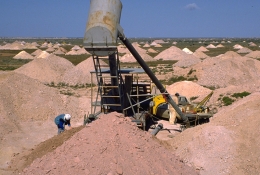 Mine holes stretch to the horizon around the town 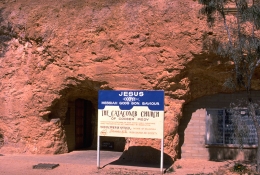 The Catacomb Church of Coober Pedy