The town is a service centre for the surrounding rich Liverpool Plains which are noted for their grain crops, cattle, mixed farming, lucerne and hay, fat lambs and wool. The main attraction in the area is Coolah Tops National Park - a little known, but impressive, destination for bushwalkers, cyclists and campers. It is a parkland noted for its waterfalls, its 120 species of birds, its wallabies, and its nocturnal possum known as the 'greater glider'.

Coolah is located on the Coolaburragundy River 487 m above sea level. It is  376 km north-west of Sydney via Mudgee or 395 km via the Pacific Highway and Merriwa. It is 109 km north of Mudgee.

It is now accepted that the Kamilaroi people called the area "weetalibah wallangan" meaning "place where the fire went out and left a black stump" which is where the initial claim that the town should be associated with the folklore expression "beyond the black stump" derived. It was only a short step from that to the naming of an early property as the Black Stump Run and the naming of the first pub in the area as the Black Stump Wine Saloon. Coolah is probably a corruption of a Kamilaroi Aboriginal word meaning "valley of the winds"

McMaster Park
McMaster Park, at the corner of Binnia and Booyamurra Streets, is an appropriate place to have pause and have a picnic. It is the heart of the town and has a pleasant garden, a tourist guide map, barbecues, play facilities and a 19th century bullock wagon. There is also a pine tree grown from a seed sent from Lone Pine by a soldier from Coolah who fought at Gallipoli.

The Folklore of the Black Stump
Coolah certainly has a serious claim to being the district which is most closely associated with "beyond the black stump". The best account of the origin of the term was included in a council application for a grant where the applicant wrote: "‘Early history of Coolah is closely linked with limits of settlement and the Crown Land Commissioners. Governor Darling became so concerned at the spread of settlement that on 14th October 1829 he issued a Government Order defining the ‘limits of location’ or the ‘boundaries beyond which land was neither to be sold nor settlers allowed’. The northern boundary was the Manning River up to its source in the Mount Royal Range, then by the Liverpool Range to Pandora Pass, down the Coolaburragundy River and in a south westerly direction to the settlement at Wellington.

"The Black Stump Run is described in the Government Gazette of 19th June 1850, as an area estimated at 16,000 acres with grazing capacities of 640 cattle. It was bounded by the Coolah Range on the south, on the north by the (Binnaway) road leading to the big river (the Castlereagh). Governor Darling’s proclamation of Limits of Settlement meant that no-one was to go beyond the Black Stump Run." Beyond the black stump came to mean "country beyond the reach of civilised comforts and facilities."

Black Stump Nursery Rhyme Village and Camel Farm
This unusual 'village' features nursery rhyme characters as well as a matchstick work display and 174 gnomes. It is located 5 km south-west of Coolah on the Mudgee - Gilgandra Road and sign posted to the right. Tel: (02) 6377 1375 for details.

King Togee's Grave
The headstone of Butheroe King Togee is located 31 km west of Coolah on the Coolah-Neilrex Road, just past the 'Langdon' homestead. It is a sandstone headstone with a sign reading: 'TOGEE KING OF THE BUTHEROE TRIBE'. King Togee was friendly with the early settlers but was speared to death by a young man named Cuttabush who later became the king of a Coonabarabran sub-tribe. It is an interesting footnote to the Aboriginal history of the area.

Coolah Tops National Park
Coolah Tops National Park, which was dedicated as a national park as recently as 1996, is located on a plateau 30 km east of Coolah via Coolah Creek Road. It lies where the Liverpool Range, the Warrumbungle Range and the Great Dividing Range meet. The park is primarily a eucalypt forest on basalt soils with abundant wildlife. One of the most impressive species in the park is the greater glider, a small possum which can glide for up to 100 metres.

Warung State Forest Road runs through the park. At the park entrance is an information board. Another 3 km on the right is a road to a car park and picnic site which is the start of a 1.5 km walking track which leads to the spectacular Norfolk Falls and on to the Bald Hill Creek Falls where there is a bush camping area. Further along the Warung State Forest Road is Pinnacle Road which heads off to a short track that leads to Cox Creek Falls Camping Area. About another 700 m along Pinnacle Road, to the right, is the park's main campsite known as The Barracks where there is an information bay and toilet-barbecue-picnic facilities. This area is known as a place where giant grass trees abound. Another 3 km along Pinnacle Road there is a car park where there is a short walk to Rocky Creek Falls which offer excellent lookout points from the escarpment. Further north on Pinnacle Road are sign posted departure points for the Racecourse Walking Track (6 km) and the Bundella Walking Track (7 km). The latter leads past a lookout area. At the end of Pinnacle Road is a short walking track to the Pinnacle Lookout, a steep basalt outcrop with fine views to the Warrumbungles. The park has a stand of the largest snow gums in the world. They can be found on the right-hand side of the Warung State Forest Road as you head east about 22 km from Pinnacle Road. There is a walk through the stand.

About 24 km east of Pinnacle Rd, on the left-hand side of The Forest Road, is Breeza Lookout which offers extensive views out over the Liverpool Plains. There is a small picnic area and an information bay. There is also a short but steep track to Shepherds Peak. For more information check out http://www.nationalparks.nsw.gov.au/coolah-tops-national-park/travel-info and http://www.environment.nsw.gov.au/NationalParks/parkHome.aspx?id=N0088.

Cunningham Memorial and Pandora's Pass
Located on Coolah Creek Road 26 km from Coolah is a memorial to the explorer Alan Cunningham who pitched his camp nearby and named Pandora's Pass. In 1823 Cunningham was the first European to reach Pandora's Pass which took him over the Warrumbungle Range where he first saw the Liverpool Plains. 4 km north of the Memorial is Pandora's Pass  which is 815 m above sea-level. It offers panoramic views over the Coolah Valley and north to the Liverpool Plains. Check out http://monumentaustralia.org.au/themes/landscape/discovery/display/20865-allan-cunningham-memorial for more details.

* Prior to European settlement the district around the Coolah valley was occupied by the Kamilaroi and Wiradjuri peoples.

* In 1823 explorer Allan Cunningham became the first European to reach the district when he crossed the Warrumbungle Range at Pandora's Pass and moved down on to the Liverpool Plains.

* In 1826 Governor Darling declared a boundary to the settlement in New South Wales declaring "land beyond this point was neither sold nor let, nor settlers allowed." This was 9 km north of Coolah. Around this time the Black Stump Wine Saloon was established and named after the Black Stump Run and Black Stump Creek.

* The district was surveyed in 1832 and squatters moved in searching for fresh pastures.

* People began to settle in the Coolah district in the 1840s.

* By 1848 there was a blacksmith operating out of a slab hut and a slab hotel had been built.

* By the 1870s local sandstone was replacing timber slabs.

* In 1905 the historic Black Stump Wine Saloon burnt down.

* In 1996 the Coolah Tops National Park was dedicated.

There is a useful, downloadable brochure on the town and the surrounding area. Check out http://warrumbungleregion.com.au/ckfinder/userfiles/files/Modified%20Coolah%20Town%20Guide%20FOR%20WEBSITE%20220109.pdf for details. 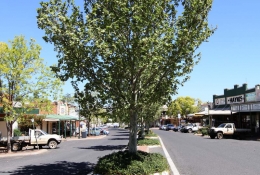 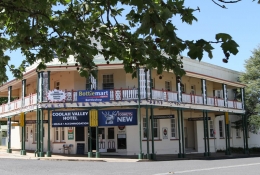 The Coolah Valley Hotel (1929) in the town's main street. 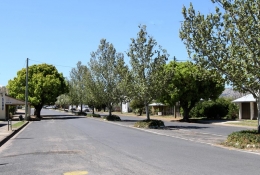 The main entrance to Coolah - a classic sleepy country town. 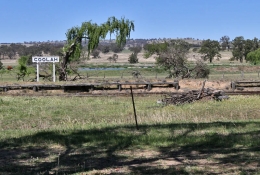 All that is left of the old Coolah Railway Station. 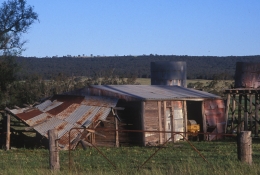 Ruins of property outbuildings near Coolah on the Narangie Road