Quiet country town in the Riverina known as the Hay and Chaff Capital.

Coolamon is a small wheat-belt town with broad streets and verandas along the main street. It is known as the 'hay and chaff' capital. It is major producer of wheat and chaff and is noted for the quality of its fat lambs. The traditional sheaf haystacks which dot the countryside are an impressive sight. An unusual feature of the flat, clay countryside are the thousands of indentations in the ground which fill with water. They are named "Coolamon Holes", a name after an Aboriginal word for a hollow wooden storage vessel. The main attractions of the town are historic: the Up-to-Date Store Cultural Precinct and the Kindra State Forest, an ideal birdwatching location. In nearby Ganmain there is a very unusual Hall of Conciliation built out of hay bales.

Coolamon is located 471 km south-west of Sydney via the Hume  Highway and the towns of Cootamunda and Junee. It is 42 km north of Wagga Wagga and 251 metres above sea level. The tiny town of Ganmain is 15 km to the west.

The Coolamon district was traditionally occupied by Wiradjuri Aborigines and it is from their word "coolamon", meaning water basin or water dish, that the town gets its name. The area around Coolamon has a large number of natural indentations which hold water and consequently when the first European settler in the district, J. Atkinson, established his property, he named it 'Coleman'. The local railway station which opened in 1881 was named Coleman which changed to Coolamon in 1895.

Up-To-Date Store Cultural and Learning Precinct
Located at 127-129 Cowabbie Street, the Up-To-Date Store Cultural and Learning Precinct is a beautifully preserved General Store which was established in 1907. The building was completed in 1909. For most of its life it was a typical general store providing locals with every imaginable item. The Coolamon Shire Council has created a building which combines a library, two museums, a cafe and a visitor information service all built around a retail experience that no longer exists. It's a space of historical significance which includes a fully functioning Lamson Cash Railway Machine (the only known ball-style cash railway system in the world that is still in its original location), and the 'Mavis Furner Collection' (a collection of over 200 crocheted garments and accessories). Included in the museum experience is the collection of Garth Jones farm machinery - a rare collection in pristine condition. The collection highlights the intimate link the region and the Store had with the development of agriculture. Also in the collection is Reg Godde's Vintage Farm Machinery and Miniature Working Models, a labour of love which has been brought into town. Check out http://www.coolamonshire.com.au/experiences/arts-culture.aspx for more details. There is a downloadable brochure. Check out http://www.coolamonshire.com.au/f.ashx/The-Up-to-Date-Store.pdf. The store is open from 10.00 am - 4.00 pm Tuesday to Friday, 10.00 am - 1.00 pm Saturday and 11.00 am - 2.00 pm Sunday. Tel: 0428 273 450.

Kindra State Forest
The Kindra State Forest is located off the Temora Road east of Coolamon. It is served by an outstanding and detailed brochure which can be downloaded by accessing http://www.coolamonshire.com.au/tourism/attractions/kindra-forest.aspx. The main entrance to the Forest is on Lewis Street and it comprises 52 ha of remnant bushland which has a number of walking trails. The Forest is known for its rich birdlife. The Coolamon Shire website notes: "Over 100 bird species have been sighted in Coolamon Shire, many of which can be found or viewed from the Forest area. A colony of large and often noisy White Winged Choughs reside in this locality - their large mud nests can sometimes be observed. Red-capped Robins fly in close to investigate intruders. White-winged Trillers and Rufous Whistlers can often be heard and Red Wattle Birds as well as a variety of other Honeyeaters can be spotted. At the top of the rise there is an excellent view of the Travelling Stock Reserve dam constructed as a back-up water supply for the township of Coolamon. The dam provides a habitat for a wide variety of birdlife including the endangered Superb Parrot, Swans, Pelicans and Ducks." And the downloadable brochure has a list 104 birds that have been reported in the local district.

Ganmain
Located only 15 km west of Coolamon Ganmain is a typical, small and friendly, Riverina town. It has an historic museum, a excellent local park for picnics, and, most significantly, the remarkable Hall of Conciliation. For more information check out http://www.coolamonshire.com.au/tourism/our-towns-villages/ganmain.aspx. It has an excellent downloadable map of the town.

Ganmain Historical Museum
Located in Waterview Street and established by seven local families in 1973 it is a typical rural museum with a large collection of farm implements, household items, sporting and war memorabilia, photographs and newspaper articles all relating to the local area. It is open on Sundays from 1.00 pm - 4.30 pm or by appointment. Admission is free. Check out http://www.coolamonshire.com.au/tourism/attractions/ganmain-historical-museum.aspx which provides a number of telephone numbers of people who will open the museum by appointment.

The Hall of Conciliation, Ganmain
This is a round, heart-shaped, load-bearing straw bale building in Moore Street. The Hall was built by the delegates to the International Straw Bale Building Conference 2002 which was held in Ganmain and at the Charles Sturt University in Wagga Wagga. The practical side to that conference was the building of the Hall of Conciliation.  A half acre block of land was returned to the Wiradjuri Nation and accepted by Wiradjuri Elders the late Cec Grant and his sister Flo Grant.  The building went up in 5 days or around 15 hours (3 hours per day for the 110 delegates), in an impressive show of community building.  At the conclusion of the conference Archbishop Francis Carroll (who was a Ganmain local) and three other pastors dedicated the building and it is now known as the Ganmain Hall of Learning and Conciliation. The Hall of Conciliation is a timber & straw bale special purpose structure. It is a place for the Wiradjuri people to tell their story and to promote reconciliation in our country.

Hay Display Centre
Located in Pioneer Park on Ford Street near Boggy Creek this is a simple celebration of the town's commitment to hay production. It is one of the most hay and chaff productive towns in Australia. The exhibition is open and can be accessed 24 hours a day. More information can be had by tel: 0417 482 976.

Ganmain's Murumbang Interpretative Walk
Located off Lake Street and winding around the banks of Boggy Creek, Ganmain's Murumbang Interpretative Walk includes bird hides, interpretative signage and an Interpretative Centre as well as picnic facilities. The website explains that the visitor should see and experience: "Waterside vegetation habitat for reptilian and amphibian species, as well as nesting areas for wetland birds. Look for birds such as Herons, Ibis, Spoonbills and Ducks. Listen for frogs and insects in the overhanging grasses and reeds. The surrounding woodland provides important habitat for threatened species including the Superb Parrot, Swift Parrot and Red Capped Robin. Tiny Thornbills, Silvereyes, Honeyeaters and the Coolamon Shire's iconic bird, the White-Browed Babbler share their home with southern marbled geckoes, brown snakes, red-bellied black snakes and several other reptilian species." For more detailed information and a downloadable map, check out http://www.coolamonshire.com.au/tourism/attractions/ganmain-s-murumbang-interpretive-walk.aspx.

* Prior to European occupation the local area had been occupied by Wiradjuri Aborigines for at least 20,000 years.

* The first settler in the area was J. Atkinson who established the  'Coleman' station in 1848.

* A township started to emerge in the late 1870s as the train line moved westward. Around this time the town was surveyed.

* The local railway station opened in 1881 as Cowabbie Road but was changed to Coleman a week later.

* The name of the railway station was changed to Coolamon in 1895.

The local council has a useful website with a number of downloadable brochures. Check out http://www.coolamonshire.com.au/tourism/heritage/places-of-interest.aspx. 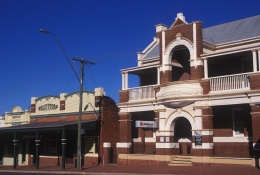 The elegant National Bank in the main street. 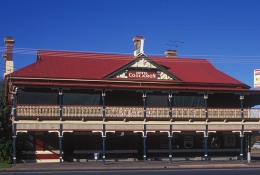 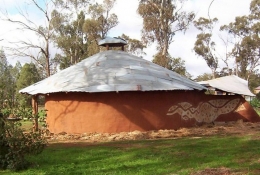 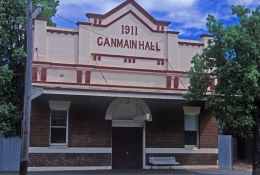