The first holiday resort town on the Gold Coast

Coolangatta is the most southerly of all the holiday destinations on the Queensland Gold Coast. Because it can claim to be one of the oldest developments on the Gold Coast, Coolangatta (and its twin town Tweed Heads in New South Wales) has not seen the level of frenzied development which has characterised the theme parks and high rise apartment blocks which spread from Surfers Paradise to Southport. Over the years the border between New South Wales and Queensland has become so indistinct that visitors can pass from one state to the next barely knowing they are in a new state jurisdiction. The main commercial attraction in the area is the remarkable Currumbin Wildlife Sanctuary to the north of the town. The relatively quiet and peaceful beaches are a magnet to holidaymakers and surfers.

Coolangatta is located 104 km south of Brisbane via the M1, Pacific Motorway.

Coolangatta was named after the schooner, Coolangatta (in turn named after a mountain between Shoalhaven Heads and Berry on the NSW South Coast), which was wrecked on the coast in 1846. It is claimed that the word, probably from the Tharawal Aboriginal language, meant either "good lookout", "beautiful place" or "splendid view" which originally applied to Alexander Berry's Coolangatta estate but meant little on the Queensland border.

At various points there are small, rocky headlands including a small rocky elevated headland with Pat Fagan Park which offers views up the coast, picnic tables and pleasant walks around the headland. To the south of the headland is Rainbow Bay, a smallish cove, which offers a level of intimacy not usually associated with this area of the Gold Coast. On the southern side of Rainbow Bay are Snapper Rocks and Duranbah Beach, at the northern end of the mouth of the Tweed River. Duranbah Beach is a popular surfing destination.

Between Snapper Rocks and Duranbah Beach, near the headland, is an 18-metre memorial to Captain Cook which takes the form of a capstan moulded from cast-iron ballast jettisoned from the Endeavour and recovered in the 1960s. There are four supports that lie exactly on the compass points. This memorial is known as the Captain Cook Memorial Lighthouse.

Captain Cook Memorial Lighthouse
By any conventional measure the Captain Cook Memorial Lighthouse, which dates from 1971, looks nothing like a lighthouse. Constructed as four concrete columns - each of which points to the four main points on the compass - and a bronze sculpture, it looks more like a monument although it is operated by the Australian Maritime Safety Authority, is elevated 45 metres above sea level (20 metres above ground), and can be seen 18 nautical miles out to sea. When it was first constructed it experimented with a laser beam but this proved unsatisfactory and by around 1975 it had returned to electric lamps, mirrors and magnifying glasses. There are picnic spots and a walk along the cliff-edge. Dolphins can sometimes be seen out to sea. There are views of the coastline from Surfers Paradise to Byron Bay. North of the headland the beach is continuous to the small mouth of Flat Rock Creek. It is edged by Marine Parade and there is a narrow foreshore.

Coolangatta Centaur Memorial and Walk of Remembrance
It is a little known fact that the Japanese Navy, in the shape of submarines, was very active off the Queensland and the Australian coasts. A total of forty-one Allied and Australian Naval and Merchant ship were sunk off the coast during World War II. This memorial remembers them with a combination of the Centaur Memorial (a memorial to a hospital ship sunk off Stradbroke Island) and a Walk of Remembrance which has separate plaques for each of the sunk vessels. The Centaur Memorial is a small "steel pyramid on top of a 15 tonne pink granite stone from Turallin near Millmerran on the Darling Downs. The boulder symbolises the ecology, the pyramid represents the spirit of those who died in the Centaur sinking. The tip of the pyramid can be removed to expose an oil fuelled lamp which burns on the night of the anniversary of the sinking. Scrolls containing the names of those on board are also contained in the pyramid. A Walk of Remembrance leads from the memorial to the cliff top." Check out http://www.qldwarmemorials.com.au/memorial/?id=441 for more details.

Walking from Boat Harbour around the Headland
There is a useful brochure (available at the Tweed Visitor Information Centre) titled Boat Harbour to Point Danger-Rainbow Bay which lists a total of 18 places of interest in a 3.8 km circuit which starts and ends at Chris Cunningham Park on the shores of Boat Harbour at Tweed Heads. It includes the Breakwater Walls which were constructed in 1891; the excellent views from Point Danger; the Captain Cook Memorial Lighthouse - built in 1970 to celebrate the bicentenary of Cook's journey up the coast and costing $180,000 at the time; the Walk of Remembrance; the site of the Snapper Rocks Sea Baths built in 1956; and the historically significant Greenmount Surf Life Saving Club which was formed in 1908 with the Club House being built in 1911.

The Beaches to the North
At the northern end of Tugun Beach is the small mouth of Flat Rock Creek which is named after a small rocky outcrop south of the estuary. The creek forms the border between Tugun and Currumbin. A small rocky outcrop at Kropp Park lines the southern bank of the creek behind the beach while Currumbin Wildlife Sanctuary sits on part of the northern bank. On the northern side of Flat Rock Creek is Currumbin Beach which is noted for its rock pools and gentle surf. It is cut in two by Elephant Rock and its lookout which lie east of the parking lot at Currumbin Beach Vikings Surf Lifesaving Club. At the northern end of the beach Currumbin Point, with its rock platform, extends outwards forming a natural breakwater at the mouth of Currumbin Creek which is popular with anglers. There is a good lookout at Elephant Rock.

Currumbin Wildlife Sanctuary
Established in 1947 Currumbin Wildlife Sanctuary is one of the oldest "attractions" on the Gold Coast. By 1976 it was run by the National Trust of Queensland and was claiming to be the home of the world's largest captive collection of Australian native animals, including 1,400 species of mammals, reptiles and birds. It became famous for its rainbow lorikeets which arrive in vast numbers to be fed twice daily at 8.00 am and 4.00 pm. During the course of the day it has a non-stop series of activities including a crocodile photo opportunity, pelican feeding, a bird of prey photo opportunity, an Australian sheep shearing show, a Blinky Bill to the Rescue Show, an Aboriginal Dance Show and a snake photo opportunity.

Elephant Rock
An interesting remnant of the huge 80 km-wide volcano that centres on Mount Warning at Murwillumbah is the rocky outcrop at the northern end of Currumbin Beach known as Elephant Rock. It is possible to walk to the top which offers fine views south towards Coolangatta and north towards Surfers Paradise and Southport.

* In 1770 Captain James Cook, while sailing up the East Coast of Australia, named Point Danger at what is now Coolangatta.

* The area was explored by surveyor John Oxley who discovered and named the Tweed River in 1823.

* By 1828 a convict station had been established in the area.

* The town was named after a ship, the schooner Coolangatta, which was wrecked on the coast in 1846.

* By the 1880s the beauty of the area had been recognised and people built holiday cottages.

* In 1883 the township of Coolangatta was surveyed.

* The Tweed Heads and Coolangatta SLSC was established in 1911.

* In 1914 the town of Coolangatta was established as a local government area.

* By the 1940s people from New South Wales and Victoria had made Coolangatta a popular resort.

* In 1947 the Currumbin Bird Sanctuary was created - famous for feeding lorikeets.

* In 1953 a jingle titled It's Hot in Brisbane but it's Coolangatta was used to promote the town as a holiday destination.

The website http://www.coolangatta.net has detailed information about accommodation and restaurants in the area. 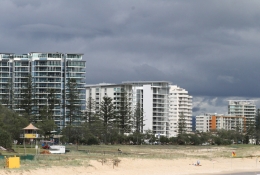 The view across Kirra Beach towards the high rise at Coolangatta. 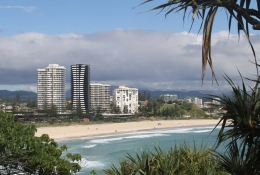 Coolangatta and Rainbow Bay from Pat Fagan Park at the northern end of Point Danger. 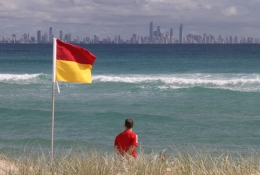 The view from Kirra Beach across to Surfers Paradise and Southport. 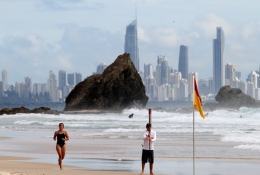 Currumbin Point to the north of Currumbin Beach with Surfers Paradise on the horizon. 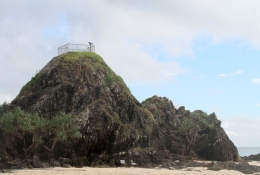 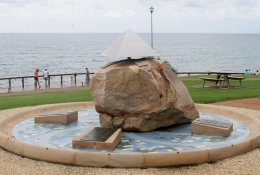 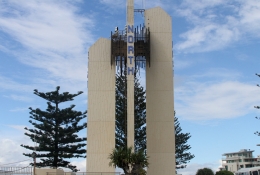 The Captain Cook Memorial and Lighthouse at Point Danger. 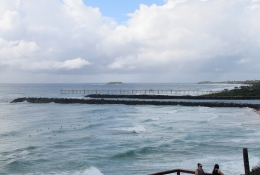 North Head and South Head, the breakwaters at the mouth of the Tweed River, and surfers Duranbah Beach. 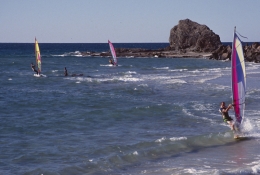 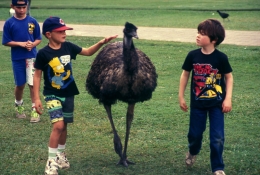 Up close and personal with a very friendly emu at Currumbin Wildlife Sanctuary. 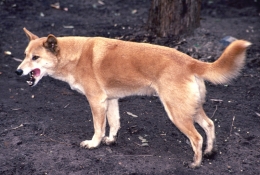 A dingo bears his teeth at Currumbin Wildlife Sanctuary.