Town known as both the 'Gateway to the Warrumbungles' and the 'Astronomy Capital of Australia'.

Coonabarabran is a moderate-sized rural service centre on the Castlereagh River on the New South Wales Central Western Slopes. The countryside around the town is known for its wool, wheat and timber but, in recent times, the town has become known both as  the 'Gateway to the Warrumbungles', a mountain range which arcs around the town to the west, north and east, and the 'Astronomy Capital of Australia' because of the Siding Spring Observatory and the famed Anglo-Australian optical telescope.  The area celebrates its connection with astronomy each year with the Warrumbungle Festival of the Stars which is held in October.

Coonabarabran is located 483 km north-west of Sydney via Newcastle, 458 km via Mudgee and it is 509 m above sea-level.

No one is certain what 'Coonabarabran' means in the language of the local Kamilaroi people. It has been suggested that it may be an Anglicised version of 'gunbaraaybaa', a Kamilaroi word for 'shit'. Not surprisingly this has not been popularised. The more positive explanation is that a sheep station was established in the area in 1836 and named 'Cooleburbaran' (no explanation for the word was ever offered) and in 1848 the property was taken over by James Weston who changed the spelling to 'Coolabarabyan'. The town name probably comes from this property.

Australian Museum Diprotodon Exhibition
Located at the Coonabarabran Visitor Information Centre on the Newell Highway, the Australian Museum Diprotodon Exhibition displays the skeleton and skull of a Diprotodon, the largest marsupial ever to have lived and a superb example of Australian megafauna. Looking something like a buffalo-sized wombat, the particular diprotodon roamed the area 34,000 years ago. This particular skeleton was found at Cox's Creek near Tambar Springs in 1979. It is believed that the Diprotodon roamed Australia between one and two million years ago and became extinct around 20,000 years ago. The museum is open daily from 9.00 a.m. to 5.00 p.m., tel: (02) 6849 2144.

Crystal Kingdom
Crystal Kingdom houses 'Minerals and Fossils from the Warrumbungle Ranges' and proudly claims that it was "the first collection in Australia to display minerals and fossils from one local area only". The collection includes rare zeolite crystals, a huge crystal cave, as well as local fossils and The Crystal Shop which sells opals, sapphires, amber, topaz, garnet, amethyst and many other gemstones. It is located at 16 Chappell Avenue, 700 m north of the centre of Coonabarabran and is open from 8.00 am to 5.00 pm daily, tel: (02) 6842 1927. Check out http://www.crystalkingdom.com.au/ for more details.

The Amillary Sphere
Located outside the local Court House, on the corner of the Newell Highway and Dalgarno Street, is a very unusual sundial known as an "armillary sphere". It was placed there on 16 October, 2009 to celebrate 35 years of the Anglo-Australian telescope at Siding Springs. It can read the time (on a sunny day) but needs some minor, modifying calculations.

What is the appeal of Coonabarabran? This is classic dry, inland Australia and it happens to be an ideal place for stargazing with a combination of relatively high altitude, low humidity, a non-turbulent atmosphere, clean air and an average of 70% clear night skies. Never have the stars looked so bright in the night sky.

Siding Spring Observatory is a complex of international importance which has the largest optical research telescope (the Anglo Australian Telescope opened by Prince Charles in 1974) in Australia (3.9 m). The huge telescope can been seen on the top of the Warrumbungles from the surrounding countryside. The main attraction at Siding Spring is the Visitor Centre which includes an interactive exhibition, a theatrette with a short film, a science gift shop and the Exploratory Cafe. The Siding Spring Exploratory exhibition is open from 9.30 am to 4.00 pm Monday to Friday. For more information, tel: (02) 6842 6211 or check out http://rsaa.anu.edu.au/observatories/siding-spring-observatory. It is important to register "SSO is a working research facility and as such it has no public star-gazing facilities. The Observatory and its surrounds are closed to the general public from 4pm each day."

Warrumbungle Observatory
Given that the area is known for its combination of "relatively high altitude, low humidity, a non-turbulent atmosphere, clean air and an average of 70% clear night skies" it is hardly surprising that Peter Starr, a former manager of Siding Spring Observatory, established the Warrumbungle Observatory at 841 Timor Road (tel: 0488 425 112 or check out http://www.tenbyobservatory.com) where, after dark, there is a 90 minute show which includes an astronomy presentation, live video images of the Moon and planets, an opportunity to navigate around the night sky, the ability to view the heavens through up to six telescopes including the new 20-inch telescope, and the opportunity for those who have Nikon or Canon SLR cameras to take photos of astronomical objects.

The Warrumbungle Range (of which the National Park is part) is a 130 km spur of the Great Dividing Range. It was created by volcanic action and its most striking formations are plugs made of trachyte, a fast-drying lava which fills volcanic craters and, because it is harder, remains after the surrounding cones have eroded. The result is dramatic ridges, spires and domes the best-known of which is the Breadknife which is 90 m high and one metre thick. The park is rich with wildflowers in spring and summer and is home to a wide variety of creatures including 180 species of birds as well as koalas and kangaroos.

There are a number of walks in the Park ranging from short walks which are suitable for the disabled and children to longer walks ranging from 3.6 km return (approximately 2 hours) to 18 km return or approximately 5 - 7 hours. One of the most popular walks is to the Breadknife, the Grand High Tops trail is 12.5 kilometres return and takes between 4 - 5 hours.

Pilliga Forest also known as Pilliga Scrub
The Pilliga Forest is a remnant of semi-arid woodland area which covers more than 500,000 ha to the north of Coonabarabran. Although the area is now dominated by cypress pine (reputedly the largest cypress pine forest in the Southern Hemisphere) it also has over 900 plant species which, inevitably, means it is spectacular in spring and summer and has a rich collection of fauna and flora including colonies of koalas, over 50 varieties of reptiles, squirrel gliders, bettongs and Pilliga mice. It is believed that before the arrival of Europeans the area was lightly timbered. Today the forest is criss crossed by 2,700 km of roads, many are old Forestry roads. It is an ideal location for bushwalking and birdwatching. Information can also be obtained from the Coonabarabran Visitor Information Centre, tel: (02) 6842 1441 and there is the excellent Pilliga Forest Discovery Centre at Baradine. Check out http://www.nationalparks.nsw.gov.au/pilliga-national-park for the range of activities in the park which include the Sandstone Caves Walking Track and Sculptures in the Scrub.

Sculptures in the Scrub
Located at Dandry Gorge in the heart of the Pilliga Forest (take the Dandry Road north of Coonabarabran) these artworks are made from bronze, stone and stainless steel. The four main sculptures were created by artists Brett Garling, Col Henry, Ken Hutchinson and Badger Bates (an indigenous artist) and have been placed at Dandry Gorge to provide an opportunity for visitors to view the works against the beautiful vista of the Dandry Gorge and the Pilliga scrub. The fifth sculpture by Pamela Denise from Nymbodia is an interpretation of the women of the Pilliga as expressed through five mosaic sculptures. Check out http://www.nationalparks.nsw.gov.au/pilliga-national-park/sculptures-in-the-scrub-walking-track/walking for maps and specific details.

* Prior to European settlement the area was the home of the Kamilaroi people.

* The first European to reach the area was the explorer John Oxley and his party who passed 25 km north of the current townsite in 1818. It was George Evans, a member of Oxley's expedition, who named the Castlereagh River.

* A sheep run was established in 1836 and named 'Cooleburbaran'.

* By 1848 the property was owned by James Weston who renamed it 'Coolabarabyan'. Weston grew wheat and built a flour mill.

* By 1848 William Field owned land opposite Weston on the northern bank of the river.

* The location where Field and Weston settled was a suitable place to ford the Castlereagh River and consequently the district was used as a transport route on what became known as the 'Old Wool Road'. It joined Queensland to the river port of Morpeth.

* Increasing wool trade from Queensland saw both Field and Weston establish a store and hotel on opposite sides of the crossing. This was the beginning of the town.

* Through the late 1840s a blacksmith's shop and a Presbyterian school were opened and by 1850 the settlement had and a post office.

* The construction of the Court House and a local lockup occurred in 1860 and in that same year land was offered for sale.

* Australia's only Chinese bushranger, Sam Poo, was active in the district in 1865 but was caught and hung that year after killing a police officer.

* All of the major religious denominations built churches in the town through the 1870s.

* Cobb and Co established a coach service through the town in 1876.

* A shire hall, sawmill and newspaper were established in 1877.

* A new sandstone courthouse was built in 1878.

* The first bridge over the Castlereagh was built in 1885.

* By 1904 Coonabarabran was promoting itself as the 'Katoomba of the north west'.

* Today it is a successful service centre for an area known for its wheat, sheep and timber production. Tourism to the Warrambungles also draws visitors to the town.

The most useful website is http://www.warrumbungleregion.com.au/coonabarabran.cfm which has links to Warrambungle National Park and Siding Spring Observatory. 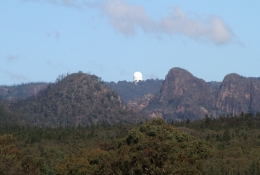 Siding Spring Observatory and the Warrumbungles 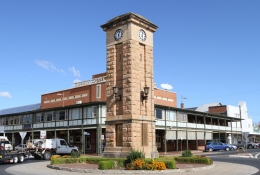 The clock tower in the town's main street. 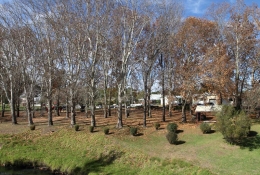 The end of autumn in Neilson Park beside the Castlereagh River. 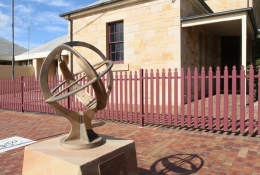 The armillary sphere sundial, celebrating 35 years of the Anglo-Australian Telescope, outside the Court House.

A distinctive volcanic plug in the Warrumbungle Ranges. 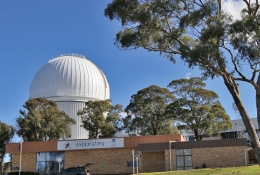