Coonamble is a small rural service centre with a stable population of around 3000 people. The Coonamble Shire stretches from the western slopes of the Warrumbungle Range to the alluvial plains on either side of the Castlereagh River. The district is known for its sheep and cattle. The quiet town has a charming main street with huge old pubs, interesting murals, amusing nickname caricatures and a number of Art Deco buildings, a result of a major fire in the town in 1929.

Coonamble is located 536 km north-west of Sydney via Mudgee, 97 km north of Gilgandra and 180 m above sea-level.

There is some uncertainty about the district's original inhabitants. The Kamilaroi, Kawambarai and Weilwan Aboriginal groups all moved through the area. It is from one of those language groups that the town's name, 'gunambil', originates. It was thought to mean 'full of bullock's dung', although the last surviving full-blood Aborigine in the area claimed it had the more general meaning of 'full of dirt'.

Coonamble Heritage Walk
The excellent and informative Discover Coonamble Holiday Guide includes a map of the centre of town (it only involves the main street and two side streets) which includes a total of 34 places of interest. Many of the places were destroyed during the 1929 fire and consequently they are locations rather than actual buildings.

Of particular interest are:
1. Post Office Corner
The Coonamble Post Office is located at the corner of Aberford and Castlereagh Streets. It was built in 1881. Next door is the Police Station. There have been police stations on this site since 1877. The statue out the front of the police station is of Constable John Mitchell who was shot while trying to prevent the escape of prisoners Angel and Thurston in 1885. The events of the shooting are recalled on the wall of the station.

23. National Australia Bank
The only survivor of the 1929 fire on Castlereagh Street is the National Bank Building (1913) at the Aberford Street corner. It was built of brick in 1913.

24. Coonamble Museum
Located near the eastern bank of the Castlereagh River in Aberford Street the history museum is situated in the old police station (1886).  The stables at the rear of the building date from the 1870s. They were constructed for the horses of the mounted police who were housed in nearby barracks. The museum emphasises the history of the local area and also has interesting exhibits dealing with the mounted police and the Aboriginal trackers they employed. It is open Monday, Wednesday and Friday from 10.00 am - noon. Contact tel: (02) 6822 4532 for more information.

28. Commercial Hotel
Coonamble's main street is dominated by two huge hotels. The Commercial Hotel on the corner of Castlereagh and Aberford Streets was first built in 1876. It was rebuilt in 1912. Today the upstairs veranda has an excellent view down the main street.

Nickname Hall of Fame
Although it doesn't exist as a hall, this is one of those wonderfully quirky ideas. Cartoons of various local characters (and, of course, their nicknames) have been placed on walls around town. As you wander around you will come across Fluffy, Singo, Magpie, Darla and others. A clever way to introduce some of the unique residents of Coonamble to visitors.

Coonamble Riverwalk
There is a pleasant walk beside the Castlereagh River. It can look unimpressive when there hasn't been heavy rains in the Warrumbungles but, in reality, the Castlereagh River flows underground. After heavy rains it is one of the fastest flowing rivers in New South Wales. In 1883 the government provided a ferry to help people cross during times of flood.

The marshes were first sighted by Europeans when, following the course of the Macquarie River in 1818, John Oxley and his party found that the river disappeared into an 'ocean of reeds'. It was speculated that this was the edge of the legendary inland sea of Australia, but when Charles Sturt arrived in 1828 and explored the river he found the marshes nearly dry. The Macquarie Marshes Nature Reserve was created in 1971 and currently covers 19,824 hectares.

To see the emus and kangaroos hopping and running through the marshes and reed beds is to feel as though you are participating in a David Attenborough-voiced wildlife documentary. With the sun sparkling off the shallow waters; the reeds and water couch (paspalum) dark green against the surrounding dry plains; and the red river gums edging the deeper streams this is a uniquely Australian wildlife experience.

If you want to fly over the marshes helicopter flights are available from Nyngan. Jack Carter’s Helicopter rides are organised on a private basis, take around an hour and fly over the southern end of the Macquarie Marshes. The rate $650 per hour in a helicopter capable of holding up to four people (that's $162.50 per person if there are four of you). Contact Nyngan Riverside Caravan Park, tel: 0428 322 037.

John Oxley Memorial
Located 12 km north of Gulargambone and 32 km south of Coonamble, the John Oxley Memorial is a large rock with picnic facilities beside the Castlereagh Highway. The inscription on the rock explains: "To commemorate the exploration party, led by John Oxley  - Surveyor General, of 16 men and 19 horses which crossed in this vicinity 2nd August 1818. Joint project funded by the N.S..W Bicentennial Council, Shire of Coonamble and Gulargambone Historical Society." It recalls an important time in the European exploration of the Central West of New South Wales.

* Prior to European settlement the area was inhabited by the Kamilaroi, Kawambarai and Weilwan Aboriginal groups.

* In 1818 John Oxley and his party passed through the area to the north of the town. Oxley noted: "Aboriginal bark huts were to be seen in every direction along the Castlereagh River and with mussel shells in the fire places." George Evans, a member of the party reached the river which he named the Castlereagh after Lord Castlereagh, the Secretary of State for the Colonies.

* In 1840 James Walker established the first run in the area. He named his property 'Koonamble'. It became a popular campsite for passing stockmen.

* Land on the Castlereagh River was reserved for a townsite on 5 July,1855.

* In 1859 the townsite was surveyed and the first post office established.

* In 1865 John Dunn, the only surviving member of Ben Hall's bushranger gang, was cornered at his camp near Quambone. He was shot in the foot but managed to escape until he was shot in the back. Put under light guard, owing to his injuries, he crawled away at night time, only to be found 3 km away the next morning. He was hanged for murder in 1866.

* Coonamble was declared a municipality in 1880.

* A bridge was built across the Castlereagh River in 1883.

* The first bore in the district was drilled at Coonamble in 1894.

* A fire raced through the town on 6 February, 1929, destroying 38 of the pre-war buildings in Castlereagh Street. It is said the glow could be seen in Gilgandra.

The town's website - http://www.coonambleshire.nsw.gov.au - has useful information about major events, eating and accommodation. 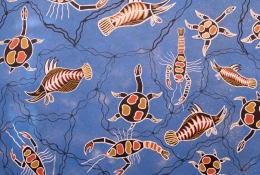 An Aboriginal mural on the wall of a building in Castlereagh Street. 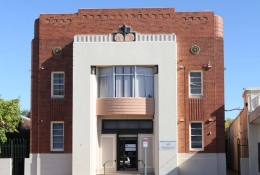 After the fire of 1929 many of the town's buildings were rebuilt in the fashionable Art Deco style of the time. 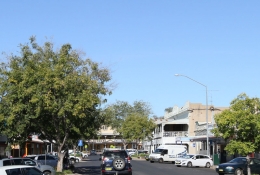 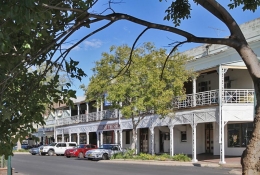 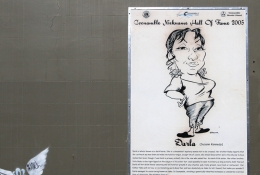 "Darla" in the town's Nickname Hall of Fame. 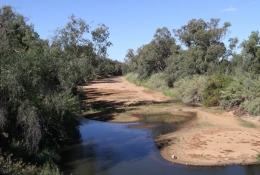 The Castlereagh River on the edge of town. 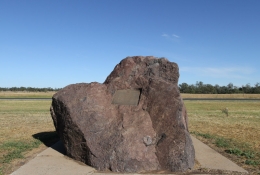 The John Oxley Memorial near where John Oxley and his exploration party passed north of Coonamble on 2 August, 1818. 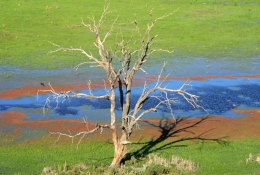 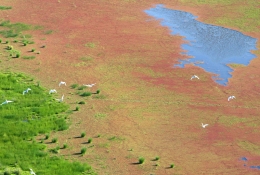 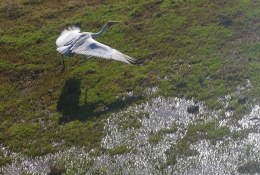 A brolga dances across the marshes as the sun glistens on the water. 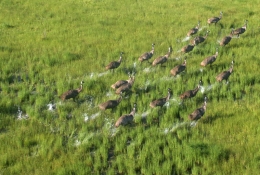 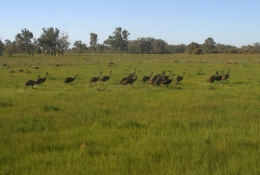 A mob of emus race across the marshes. 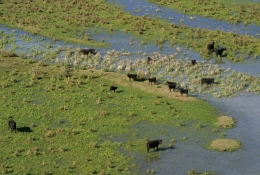 Cattle grazing on the Macquarie Marshes.