Cooroy and Pomona - small towns in the Sunshine Coast Hinterland

Cooroy is a tiny town which historically serviced the surrounding timber and dairy industries. Today it is predominantly a retirement and tourist destination. Only 10 km north is the village of Pomona with the dramatic volcanic plug, Mount Cooroora, looming over it. Pomona can claim the two main attractions in the area: each year in July mountain runners participate in the famous 'King of the Mountain Race' which involves running up the 438 m Mount Cooroora and in Pomona is the historic Majestic Theatre which is reputedly Queensland's longest-running cinema.

Cooroy is located 129 km north of Brisbane on the Bruce Highway. It is a tiny township 22 km west of Noosa Heads.

The town - the original name was Coorooey - takes its name from Mount Cooroora which, in turn, took its name from the local aboriginal word "kurui" which probably meant possum.

Majestic Theatre, Pomona
Located at 3 Factory Street, Pomona, the Majestic Theatre, built as a social hall in 1921, claims to be the world's longest-running silent cinema and the longest continuously operating picture theatre in Queensland. The theatre's website explains that "The hall was designed to serve several functions: to show silent movies, for vaudeville productions, and to act as a social centre for the town. Over time it served as a venue for dances, balls, concerts, and wedding functions, roller skating, boxing, and church services. Constructed of unseasoned milled hardwood, the hall was about 12 metres wide by 18 metres long, with seating for 198 people. It included a sprung dance floor of ¾ inch crow’s ash timber, still extant today, and was raised on stumps to avoid flooding."
Now owned and managed by the Pomona Progress Art Tourism Inc., it has been extensively refurbished, but maintains its historic character. It presents a range of live performances from singers touring Australia as well as films, including the silent movies including such classics as The Plastic Age with Clara Bow, The Gold Rush with Charlie Chaplin and Steamboat Bill Jr with Buster Keaton. Most significantly, as it proudly declares on a poster outside, it still shows Rudolph Valentino in The Son of the Sheik on the first Thursday of every month at 7.30 pm. It has been showing the same film for over 25 years. The films are accompanied by music played on the Conn Theatre Organ. Check out the programs at http://www.themajestictheatre.com.au/.

Butter Factory Arts Centre
Located on Cooroy's main street at 11a Maple Street, and open from 10.00 am - 4.00 pm Tuesday to Friday and 10.00 am - 3.00 pm on Saturday and Sunday, the Butter Factory Arts Centre specialises in exhibits by local artists and potters with most of the works being available for sale. Check out http://www.butterfactoryartscentre.com.au for details of exhibitions. Tel: (07) 5442 6665.

King of the Mountain Festival
Each year in July crazy-brave mountain runners from all over the world come to Pomona to participate in the famous 'King of the Mountain Race' (currently known as the Bendigo Bank International Mountain Challenge) at Pomona. The race involves climbing to the top of the 438 m volcanic plug known as Mount Cooroora. It might only be 4.2 km to the top and back but it is a challenge not only because runners have to traverse low hills on the way up the mountain but they have to return down the steep track which requires the agility of a mountain goat and the courage of an Everest climber. Check out http://kingofthemountain.com.au/ for details. The winner usually takes a little less than 30 minutes to complete the course.

Cooroora State Forest and Hiking Trail
If you don't want to run up Mount Cooroora, you can always walk. The sign at the bottom of the trail points out: "This hiking trail gives you the opportunity to climb to the top of Mt Cooroora. Spectacular scenic views await those who complete the steep, 1500 m climb. The walk takes around 2 hours to complete and is not recommended for the medically unfit. Access to the hiking trail is located across the road from the Council Park on Mountain Street."

* Prior to European settlement the area around Cooroy and Pomona was home to people from the Gubi Gubi Aboriginal language group.

* The first Europeans into the area were timber cutters looking for cedar. They arrived in the early 1860s.

* The settlement began to develop around 1891 when the railway reached the town and a post office was opened.

* Timber dominated the town's economy until a butter factory was built in 1915.

* Each July the 'King of the Mountain Race' has mountain runners climbing the 438 m volcanic plug known as Mount Cooroora and completing the 4.2 km run in under 30 minutes.

There is no visitor centre in either Pomona or Cooroy. The closest is the Noosa Visitor Information at Noosa Marina, Tewantin, tel: (07) 5430 5000.

There is an excellent local website for Cooroy - check out http://www.cooroy.com.au/.There is also an app for the local area http://ourtownapps.com.au/the-cooroy-app. Also check out https://www.cooroy.online which has lots of information about the district. 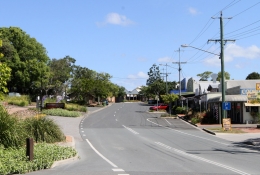 The main street of Cooroy. 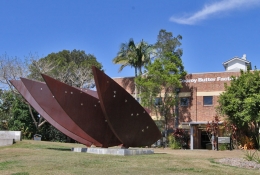 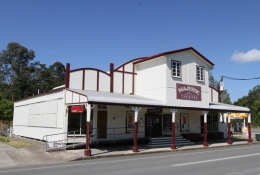 The historic Majestic Theatre in Pomona. 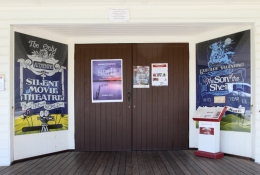 The front doors of the Majestic Theatre. 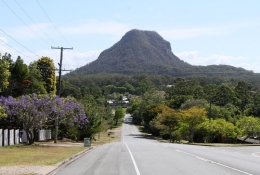 Mt Cooroora, a 438 m volcanic plug, towers over the town of Pomona.